Wizards of the Coast (WotC) has rescheduled the November Banned and Restricted (B&R) announcement to Oct. 21 after receiving a horde of complaints from the Magic: The Gathering community.

Magic’s B&R Oct. 7 announcement came and went with no changes, revealing the next Banned and Restricted release to take place on Nov. 18. The MTG community wasn’t pleased and pushed WotC to reconsider due to the disruptive nature of cards like Field of the Dead and Oko, Thief of Crowns. And WotC listened, rescheduling the reveal to Oct. 21.

With the announcement taking place after Magic’s Mythic Championship V (MCV), there are two options to consider. Banning Field of the Dead in Standard prior to MCV would have severely disrupted the metagame, forcing players to reconstruct and playtest decks with less than two weeks to prepare.

Early projections before the decklists being submitted for MCV have a majority of the field playing some form of Golos Dead decks. The situation will be similar to MCIV, when Hoggak, Arisen Necropolis completely dominated the meta. And after the tournament, WotC banned Hoggak from Modern.

The Oct. 21 date could signify that Field of the Dead will become banned in Standard following MCV. But the rescheduled date could also mean that WotC plans on banning Oko, Thief of Crowns and Field of the Dead from Brawl before it’s released in MTG Arena. Either announcement is good news, but many in the Magic community are hoping it’s both.

In Standard, Field of the Dead has taken over the meta. Much of this has to do with a lack of removal. Board wipes slow down the zombie apocalypse for a turn or two but don’t take care of the problem. 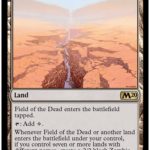 And the only cards available in Standard that can destroy a land are Demolish, Rubble Reading, and Tectonic Rift. All of these cost four mana to cast, are in Red, and are practically unplayable due to the state of the metagame.

In Brawl, the situation is under a similar threat. WotC has yet to reveal a date when the new format will launch in MTG Arena, but they have promised the community it will go live sometime in October.

With MCV taking place Oct. 18 to Oct. 20 via MTG Arena, it might be the last time players can watch Field of the Dead in action. That is if mirror matches don’t put the audience to sleep.