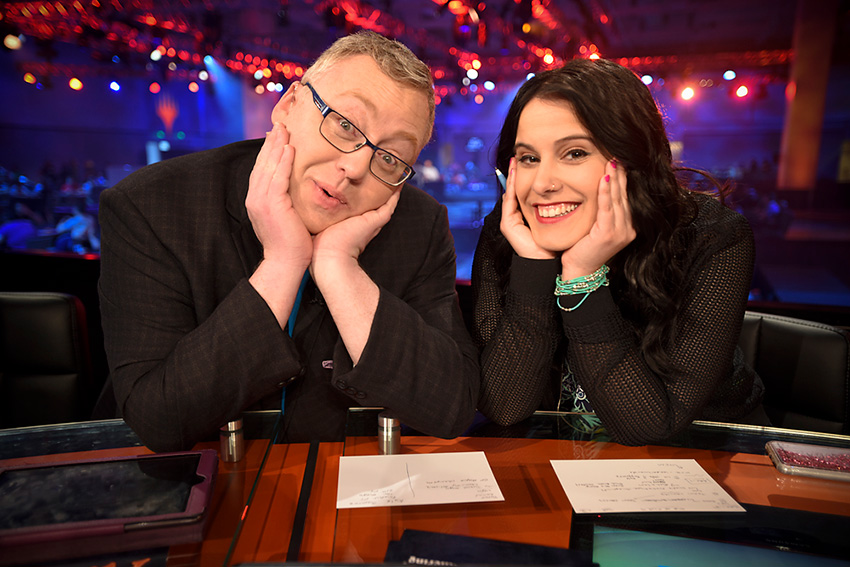 Commentary in an intricate game like Magic: The Gathering can make or break the competitive viewing experience. While certain interactions and lines-of-play come second nature to great players, it’s not always clear to most when checking out a high-level tournament like the 2020 Mythic Invitational.

In 2018, Wizards of the Coast changed how players interacted with competitive Magic. The company leaned into an esports aesthetic with the creation of the Magic Pro League and rebranded Pro Tour events to Mythic Championships. The creation of the MPL and Rivals League brought regular league play to competitive Magic, allowing the highest level players to regularly play one another. This move was accompanied by a change in how broadcasts are handled to fit the new “esports” look and feel.

Desk analyst Maria Bartholdi has been a member of the news desk on official Magic tournament production for years. As a crucial part of the viewing experience, her duty is to lead the conversation while providing context around what decks are being played, why they are being played, and who is playing them.

It’s a tricky balancing act. Bartholdi said she recognizes viewers of Magic esports come from all levels of skill and care about different aspects of the game. It’s on the production team to try and cover each base. She said that at various points in the broadcast the on-screen talent can change the tone to suit each moment.

“Top eight is when we get really serious and into the nitty-gritty of what the correct plays are in any given scenario. That’s for the enfranchised players. The nice thing is that leading up to every match we go over the decks with the expert with explaining what the deck does. So, we run the gamut in the broadcast and we try and get people in who are just like ‘Oh, what’s this competitive thing about?’”

While it’s not possible to please everybody, being able to meet viewers at their level of experience whether they’re competitive or not is a valuable aspect of production.

For Bartholdi, helping new players get into Magic and understand the competitive side of the game is a well-trained skill. As a content creator, she’s made hundreds of videos that help new players succeed in their Magic journey with her podcast and YouTube series, Good Luck High Five. The show brings a fun, light-hearted perspective to Magic analysis which can make competitive Magic more approachable. Bartholdi said she tries to extend that same vibe to her official coverage.

There are big stars in the Magic competitive scene like Reid Duke, Brad Nelson, and Luis Scott-Vargas. But their stardom was built before the modern incarnation of competitive Magic. For big tournaments like the old Pro Tours, part of the draw was the spectacle of hundreds of players playing high-level Magic. With the new league format, it’s important to develop the personalities viewers are going to be watching on a regular basis.

“(Good Luck High Five) come from a very fun and positive stance, but not so casual that our listeners aren’t interested in playing a Grand Prix,” Bartholdi said.  “I advocate for more fun, more silly stuff with the players to humanize them and the personalities on the broadcast. That’s what I’m here for. There’s plenty of people who will say no, they want more hardcore coverage and that’s great. We have that too with our coverage team.”

The broadcast did make an effort to highlight the players’ personalities in a myriad of ways during the 2020 Mythic Invitational. For example, the desk analysts had pet decks they advocated for throughout the broadcast on day one. This gave viewers at home some kind of personal connection and face to associate with decks. A standout example of this is Sean “Day9” Plott pushing for Rakdos Arcanist as a deck to watch. Bartholdi herself was pushing for the underdog Azorius Aurus strategy to make a splash in the tournament.

Other ways the broadcast attempted to build a connection between players and viewers is through a series of short feature videos called “Pro-Files” where they interviewed players on their competitive history or interesting tidbits about their Magic life. Naturally, these videos are more difficult to do with everyone playing from home and a lack of on-site interaction.

The same difficulty extends to Bartholdi and the coverage team who are still navigating how best to provide clean commentary while no one is in the same location. The final day of the Mythic Invitational was forced to have its live coverage canceled and all games were recorded and released the next day due to technical issues. Other days were marred by lagging streams, audio issues, and other production issues.

These types of issues are an example of what most esports production staff are forced to navigate due to the Covid-19 pandemic. Bartholdi said in-person coverage is immeasurably better. The ease of broadcasting next to each other and the communal aspect of coverage is an invaluable asset to the team. She pointed out how being able to watch games and bounce ideas off each other in the same room can lead to an improved analysis by bringing those ideas onto the broadcast.

Bartholdi did mention that having to do coverage online has aspects that can potentially make in-person coverage easier when it returns.

“What I think is going to be interesting is when we go back to being in person is seeing if some of these tips and tricks we’ve learned to better communicate, so we’re not stepping over each other or to know when to throw to another person, will remain in place once we get back to being in person,” Bartholdi said.

Whether the future of Magic esports shifts back to paper tournaments or leans into online play more, it’s clear Bartholdi will remain a crucial part of telling the story of Magic for years to come. From the MPL to Mythic Invitationals, her focus on developing players’ personalities and helping new players understand competitive Magic is an invaluable part of growing Magic esports.