Beginning Nov. 3, the Festival of Fae launches in MTG Arena. Artisan is the first of three events, structured around what a Magic character might find in an Artisan market.

How do I construct an Artisan deck?

Artisan is a Magic format using only Common and Uncommon cards in Standard. A deck needs to contain a minimum of 60 cards, with up to four copies of each.

There are four cards that are banned from the Artisan event, however.

There’s a one-time entry fee to play the Festival of Fae Artisan event in MTG Arena of 5,000 gold or 250 gems. Losses aren’t recorded and a player can earn rewards for up to five wins. There are no restrictions on the number of wins a player can achieve.

What are the rewards in Artisan? 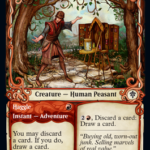 Goodies in the Artisan Festival of Fae event are achieved through wins. Each win rewards a player with a cosmetic showcase card style from the Throne of Eldraine set.

The Artisan event runs from Nov. 3 to 6 in MTG Arena.