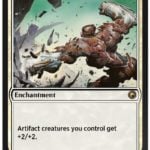 Wizard of the Coast and MTG Arena have revealed two cards within the Historic Anthology III expansion exclusive to Dot Esports.

The Historic format was first introduced as a game mode within MTG Arena as a means to play with cards that were no longer legal in the Standard format. Since its release in November 2019, the format has grown exponentially with two Anthology expansions and in popularity.

Releasing on May 21 via the May MTG Arena update, the Historic Anthology III set can be purchased in its entirety for 25,000 gold or 4,000 gems. And for the first time in Historic Anthology history, Ranked queues for the format will become permanently available within Arena.

To celebrate the release of the set and permanent Ranked queues, WotC is revealing several Historic Anthology III spoilers today, including an exclusive preview of Tempered Steel and Timely Reinforcements. 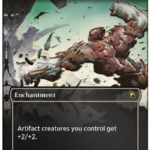 Tempered Steel is an interesting Rare three-drop that first came onto the Magic scene within the Scars of Mirrodin set. It’s an Enchantment that gives all Artifact creatures +2/+2. But it also requires two White mana to cast, excluding Mono-Blue Artifact decks that use cards like Sai, Master Thopterist in conjunction with Karn, Scion of Urza.

Most recent Artifact decks have included Emry, Lurker of the Loch from the Throne of Eldraine set due to her “Tap” ability that allows a player to cast an Artifact card from their graveyard. And in a UW build that’s using key Artifact cards like Gingerbrute, Inquisitive Puppet, Stonecoil Serpent, and Steel Overseer, Tempered Steel is a solid addition in conjunction with Emry, despite both costing three mana to cast.

Two Artifact builds using these cards that every player should check out include an Emry Aggro deck by Merchant and a UW Artifact build by Bad Boy Gaming. There’s also an option to include Dance of the Manse like Laura Gambler did in her unique Jeskai Artifact Fires deck.

As a fan of Thopters, I’d like to think Tempered Steel could improve a UW Artifact Control deck like the Azorius Thopter Friends build created by ThyrixSyx. The foundation is solid, although some of the removal spells could use an adjustment, like replacing Seal Away with Glass Casket. 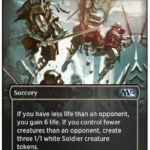 Timely Reinforcements is a three-cost Sorcery spell first introduced via Core Set 2012. In the Modern format, it’s typically a sideboard card in UW Control meant to disrupt against Aggro and Burn archetypes. But it can be used in the main-deck too, as pointed out in an article by Eric Froehlich.

UW Control decks can benefit from Timely Reinforcements in one of two ways. It either adds three 1/1 White Soldier creature tokens onto the battlefield as chump blockers or can gain a player six life if their life total is less than that of their opponent.

Timely Reinforcements has also seen recent gameplay in the Pioneer format, typically within Azorius Control builds, and often only as a sideboard card.

Correction May 8 2020: Timely Reinforcements was mentioned as seen in Pioneer decks recently but it’s not legal in the format since it’s too old and was released a year before Return to Ravnica.