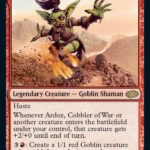 Scheduled to release on Dec. 2, the new Jumpstart 2022 (J22) adds familiar themes like Snow, Shapeshifters, and Blink. Unfortunately, the J22 set isn’t getting uploaded to MTG Arena this time around, according to Wizards of the Coast communications director Blake Rasmussen. But local game stores are hosting events where players can get into some wild gameplay through our two exclusive Jumpstart 2022 spoiler themes, Goblins and Gross.

The format is similar to the prerelease, or Sealed, but removes deckbuilding from the Limited format equation. Each pack contains a total of 20 cards, including basic lands, designed around one MTG color with a face card that has a rarity of Rare or Mythic Rare. The Jumpstart 2022 set showcases at least one new card in each pack, along with anime-themed art on some of the reprints and new art on other reprints.

In total, there are 46 themes with 121 pack variations. Each J22 pack will contain at least one Rare and/or Mythic Rare, with there being a one out of three chance of pulling a second Rare.

There are 27 possible cards in the MTG color Red that can show up in a Goblins J22 pack. The exclusive anime-themed art for Goblins is on Dragon Fodder, a reprint that has shown up in sets like Dragons of Takir and Modern Masters 2017. And there are three new cards: Ardoz, Cobbler of War, Goblin Researcher, and Instruments of War.

The new Rare, Ardoz, Cobbler of War, is a solid two-drop with Haste that pumps itself upon ETB and then other creatures as they enter the battlefield. It also has a slightly overpriced mana sink of 3R that can create a 1/1 goblin token with Haste that can only get activated as a Sorcery.

Instruments of War is a cute four-drop Artifact with Flash that can pump all goblins, or a chosen creature type, with +1/+1 stats. And Goblin Researcher is a four-drop 3/3 that can provide card advantage if it attacks.

Reprints that have a rarity of Rare are Goblin Rabblemaster, a solid three-drop that encourages aggressive goblin behavior. Ib Halfheart, Goblin Tactician returns from Time Spiral, applying pressure to opponents who attempt to block attacking goblins.

The legendary Krenko, Mob Boss is back, farming goblin tokens for each goblin you control. And Muxus, Goblin Grandee from the original Jumpstart makes an appearance for the masses by fetching goblins off the top six cards of your library straight onto the battlefield.

Common and Uncommon MTG cards are the bulk of each Jumpstart 2022 pack. Some are what is often referred to as filler cards or “Draft Chaff,” while others have left an impact within various Magic formats. 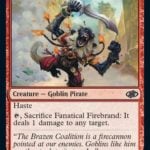 Frenzied Goblin has a cheap mana sink that can prevent an opponent’s creature from blocking. Goblin Warchief reduces the costs of goblin spells by one mana while giving all goblins Haste. And Volley Veteran can take out creatures upon ETB, with the number of goblins determining the power of his ping strike.

Unlike the Goblin packs that are self-explanatory, Gross packs are in the MTG color Black, featuring sacrifice and reanimation themes with a splash of Phyrexian power for flavor. There are a total of 28 possible cards that can show up in a Gross pack. 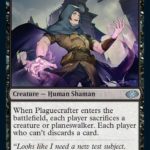 There are a total of three Rares that can show up in Gross packs, along with one Mythic Rare. And there are three new cards that can be included as well: Infernal Idol, Ossuary Rats, and Skullslither Worm (not Wurm). 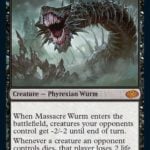 Infernal Idol is a mediocre mana rock that can draw cards at a cost of three mana and two life points. Ossuary Rats synergize with cards in the graveyard, dealing damage to creatures or planeswalkers on a 3/2 body. And Skullslither Worm is a solid four-drop 3/3 that forces opponents to discard a card while gaining two +1/+1 counters if they can’t.

The one possible Mythic Rare in J22 Gross packs is Massacre Wurm from Mirrodin Besieged. It’s a Wurm that drains opponents for life upon their creatures dying while hitting all of your opponent’s creatures with -2/-2 upon entering the battlefield.

Similar to the Goblin Common and Uncommon rarity cards, the low-rarity J22 cards in Gross are the foundation of the pack’s sacrifice and reanimation theme. 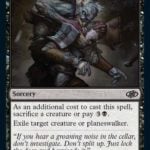 Eaten Alive returns as a powerful and cheap form of removal that’s a bomb within a Limited format. Vermin Gorger returns to feast, providing Drain and Gain to go along with the sacrifice theme. And she accompanies the infamous Witch’s Cauldron, an Artifact that cooks a creature into extinction in exchange for life gain and card advantage.

Durable Coilbug and Kraul Swarm bring creatures back from the dead. Ophiomancer, Fungal Infection, and Deathbloom Thallid support the sacrifice theme through the creation of tokens. And on the top end as a finisher is the frog spirit Yargle, Glutton of Urborg, because a Demonlord who got turned into a maggot and was eaten by a frog that exploded from within to become a giant spirit is about as gross as it gets.