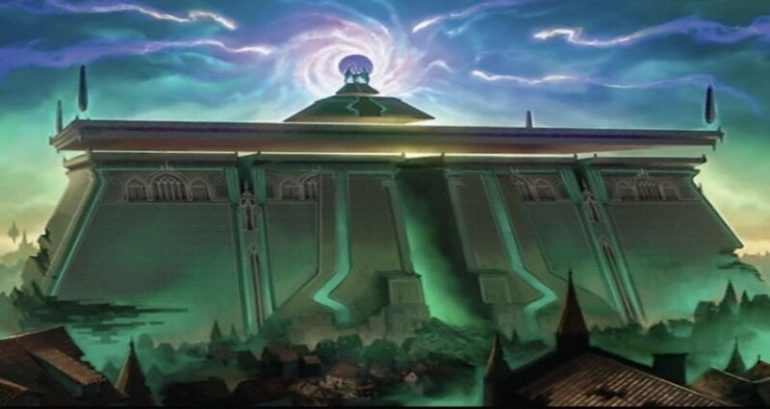 Various versions of Fires and Sacrifice decks make up 86.6 percent of the Mythic Championship VII metagame.

Since the release of the Throne of Eldraine set, Sacrifice and Fires have been popular MTG archetypes to craft. Neither deck dominated early in the season because of Oko, Thief of Crowns. But now that the elk-maker has been banned as of Nov. 5, Jesaki Fires and Jund Sacrifice have become the two of the most-popular archetypes in MTG Standard.

The difference between effect and cost is that effects go on the stack while costs don’t. Witch’s Oven is a powerful sacrifice engine because it’s ability is a cost. As explained by Sean “Day9” Potts, a player can tell the difference by where the semicolon is in the text. Here’s an example of Witch’s Oven written for both costs and effects:

Since Witch’s Oven has an effect ability, opponents are unable to react to a creature being sacrificed. When combined with Cauldron Familiar, a player can block an attacking creature with the cat and sacrifice it to Witch’s Oven, preventing any damage. And an opponent can’t respond until after Cauldron Familiar has already been fed to the Oven.

Of all the various Sacrifice decks at Mythic Championship VII, 13.4 percent of the field is playing Jund. It’s the original Sacrifice deck, using Green for Food and Red for Burn. There are several key cards every Jund Sacrifice deck will contain.

In the sideboard, players are focusing on removal and extra power with cards like Duress, Massacre Girl, Shifting Ceratops, Casualties of War, and Vraska, Golgari Queen.

Brian Braun-Duin, MPL player and creator of Esper Hero, is running a simplified version of Jund Sacrifice at MCVII. Rather than relying on Wicked Wolf for removal, he’s added four copies of Paradise Druid to his four Gilded Goose for ramp and color fixing.

Rakdos Sacrifice removes Green from the equation, running just Red and Black. Instead of relying on cards like Trail of Crumbs and mana fixing or ramp cards, it focuses more on the sacrifice theme. This is accomplished with the addition of several key cards.

Mikkonen is also running a slightly different version of Rakdos Sacrifice in the main deck, relying on Chandra, Acolyte of Flame instead of Rankle, Master of Pranks.

Unlike Jund and Rakdos, Golgari Sacrifice is more of a Control deck. It relies upon removal to keep an opponent incapacitated while the cat combo pings them to death. There are several key removal cards in a Golgari Sacrifice deck.

Kat Light and Stanislav Cifka are using Wicked Wolf in their main deck package, too. But Cifka’s sideboard really stands out at MCVII. The crafter of top decks has prepared himself for just about everything, using all the best removal spells in Green and Black.

Cifka is also playing one copy of Bolas’s Citadel in his main deck and one in the sideboard. It costs six mana but reaps huge rewards. A player can look at the top card of their library and cast it, paying life instead of mana. Bolas’s Citadel also has a cost ability that sacrifices 10 nonland permanents to reduce an opponent’s life by 10 points.

Cifka said on Twitter that his Golgari Sacrifice deck is the best. He even rated it over his UW Control. Of all the Sacrifice decks at Mythic Championship VII, Cifka’s is the most unique. And it’s one that hasn’t been played on the main stage yet.

You can watch all the Sacrifice decks in action at Mythic Championship VII from Dec. 6 to 8.