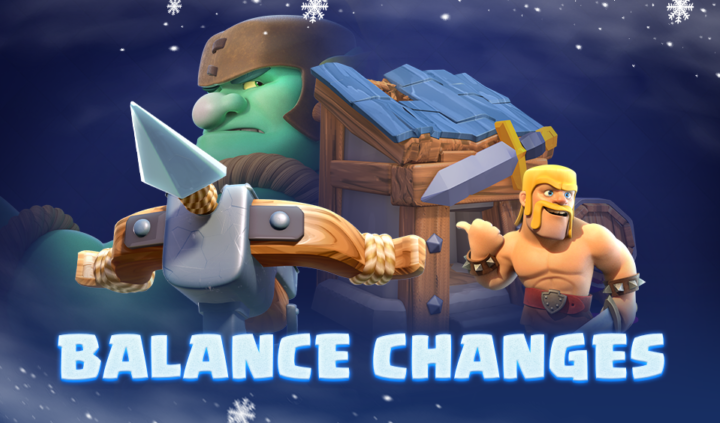 The latest season of Clash Royale brought Christmas and winter-themed content to the hit mobile game a few days ago.

But it also brought the new card Mother Witch, as well as significant balance changes that were implemented earlier today following a short period of maintenance. These alterations will affect a dozen cards, including the Heal Spirit and X-Bow.

Here are all of the balance changes, which will likely remain in effect until next year.

“X-Bow has been one of the most polarizing cards ever,” Supercell said. “We wanted to rework it to keep it a deadly threat but lessen its power as a defensive building. Now the X-Bow’s attack is more powerful than ever, able to destroy enemies with fewer shots! But as a trade-off, the X-Bow is more fragile, and does not stay on the Arena for nearly as long a time.”

“This minor rework brings Guards down to the same Hitpoints and Attack Speed as Skeletons for consistency,” Supercell said. “This results in a significant DPS buff for the little guys with a Hitpoint trade-off that will not impact its most common interactions.”

“Back when we reduced all spawner Hitpoints after a spawner-heavy meta, Barb Hut was weaker and therefore got nerfed less than others,” Supercell said. “The result—it is now the strongest. It now gets a Hitpoints nerf so it’s not as effective a defense by itself.”

“Graveyard has just been too strong for too long,” Supercell said. “Its ability to be placed on top of towers makes it extremely consistent at dealing Damage. We are delaying the amount of time it takes for the first Skeleton to appear, allowing for quicker defensive reactions and also results in it spawning 1 fewer Skeleton total.”

“We’re speeding up the Goblin Giant’s attacks so he’s a really threat when he connects to a building,” Supercell said.

“Heal Spirit is seeing widespread play because it’s just as effective as Ice Spirit at countering cards like Skeleton Army,” Supercell said. “Used defensively with a Tower, it can be an effective counter to Goblin Gang because of its splash damage. Heal Spirit isn’t a combative soul, so we are reducing its Damage significantly. Zap + Heal Spirit also now does not kill a Minion Horde.”

“Fisherman’s pulling effect is very powerful and therefore we don’t want to hurt his main function,” Supercell said. “Fisherman’s popularity in the meta is partially because he works well as a mini-tank, so we are reducing his Hitpoints to make him more fragile against other mini-tanks.”

“Witch struggles to find value at her Five Elixir cost consistently,” Supercell said. “Letting the first Skeletons spawn faster provides a clearer use case (near-instant blocking). She should exist in the meta as a counter to P.E.K.K.A decks, which may return to prominence with Fisherman and Heal Spirit’s nerfs.”

“Fixing some rounding errors, alongside the fact that the last nerf barely nudged the stats… This changes a few small interaction inconsistencies across levels, like making the entry Zap + 1 attack not enough Damage to destroy both Archers,” Supercell said.

“Due to its ability to almost always connect to a Crown Tower, Skeleton Barrel is currently very popular on mid-ladder for what’s supposed to be a niche card,” Supercell said.

“A few months ago, Bats had their Hit Speed and First Hit slowed 0.2sec, this ended up being a larger nerf than expected, so we are returning some of the nerfed stats,” Supercell said.