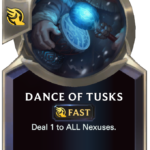 Freljord is receiving support from Legends of Runeterra‘s newest expansion A Curious Journey with seven cards.

The cards suggest Udyr is the next champion to be added to Runeterra in A Curious Journey. The two transforming cards, Murkwolf Shaman and Mammoth Shaman, point to an Udyr connection as shamans channeling animal auras.

Both Murkwolf Shaman and Mammoth Shaman transform when the opponent’s Nexus takes damage. This makes them naturally fit into a Plunder-focused deck, similar to the current Gangplank and Sejuani builds.

The lone spell from today’s Freljord reveals is Dance of Tusks, a zero-cost fast spell that deals one damage to all Nexuses.

Upgrade an existing build or craft a new Freljord deck when A Curious Journey releases on Feb. 16.