The new version of Lab of Legends is a larger-scale take on the existing Roguelike-inspired single-player content for LoR. In addition, while the video says that the mode will be available by the end of the summer, Lab of Legends: The Saltwater Scourge will be releasing tomorrow. 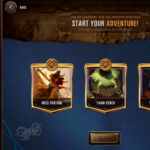 In this mode, players will choose between one of three champions from Bilgewater: Miss Fortune, Tahm Kench, and Twisted Fate. Players will be able to move across Bilgewater’s map and figuring out which nodes and paths to choose will help improve your chance at success.

Each node can consist of enemy encounters, treasures, shops, bosses, and even more surprises. If a player perishes in their run, they may respawn and restore health to not lose all of their progress, but they will receive a lower adventurer score.

Defeating enemies will grant you experience and gold, and will all be done in an effort to defeat the final boss of The Saltwater Scourge, Gangplank. While enemies will have their own powers to look out for just like in the original Lab of Legends, each enemy will have its own level and your rewards will depend on how high it is.

While The Saltwater Scourge is an exciting new development for LoR’s single-player content, Riot said this is only the first step and will look to add more features, maps, and unique encounters in future updates.