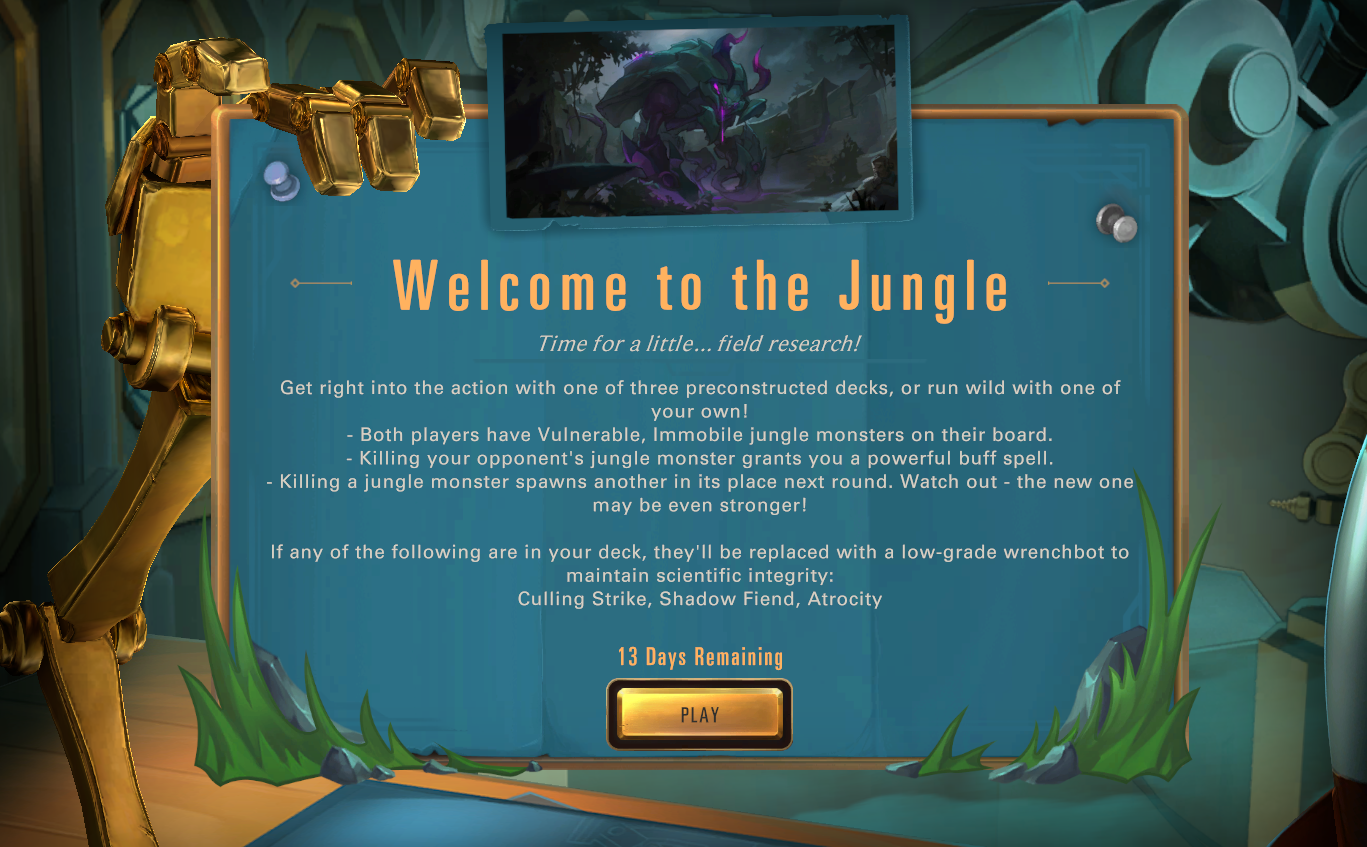 With every bi-weekly Legends of Runeterra patch comes a new casual lab experiment for players to try out. Patch 1.10 brought the mode’s sixth lab, Welcome to the Jungle, the first that allows players to create pre-made decks for it.

Another aspect of the mode is that every turn a player is not attacking, they are given a one-mana “Jungle Invade” spell that lets them use a non-jungle unit control to battle against an enemy jungle unit. This allows you to remove enemy jungle units and receive buffs during the turns you are unable to attack. 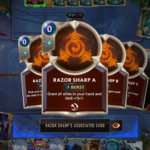 The first monster is a Crimson Raptor which is a 1/4. The Razor Sharp buff either lets you give units in your hand an deck +1/+1, ramps you for one mana and draws you one card, or summons a 3/4 Raptor and heals your Nexus for two.

The second monster is the ancient Krug, which is a 2/6. Gift of Heavy Hands is similar to the Razor Sharp, except the buff to units is increased to +2/+2, the ramp and draw is two mana and two cards, and the Krugg summoned is a 4/6 that heals your Nexus for three.

The third monster is the Rift Herald, which is 4/8. Similarly to the other buffs, Eye of the Herald’s effects are increased to either buff friendly units by +3/+3, ramp you three mana and draw you three cards, or summon a 6/10 Enraged Herald and heal for four.

The final monster that can spawn is Baron, which is 6/12. As opposed to the other jungle buffs which are modal effects, The Hand of Baron buff is just a zero mana spell which gives all of your units on board +3/+3 in buffs, Overwhelm, and Rallies you for the turn. Slaying Baron will allow you to end games quickly, similar to its League counterpart.

The Hand of Baron is also the only non-fleeting jungle buff, which allows you to play it whenever you are strong enough to use it.

The best way to win this Lab is to get on the board quickly and overpower your opponent’s jungle monsters. The more monsters you can kill early, the more the game snowballs in your favor. If you obtain an early jungle buff, the best way to use them is to either ramp your mana, or gain permanent stats. The mana ramping option is only better in the early game, as the reward for ramping diminishes slowly as the game goes on.

The prebuilt decks that Riot provides you are also potent if your collection is small. You can either get a Lucian and Kalista-style deck using Retribution style cards, which empowers your board after your units die. The other deck the developer provides you is a Lulu and Zed that uses the new Call of the Mountain support-style cards.

While there are a couple of cheesy strategies that you can go for, like Unyielding Spirit or Mystifying Magician to keep your jungle monster safe, it’s still better to try to accrue an early and aggressive board so that you can constantly cycle through the jungle.

Players have until LoR’s next patch to experiment with Welcome to the Jungle’s unique take on the game. LoR Patch 1.11 is set to go live two weeks from now, Sept. 30.