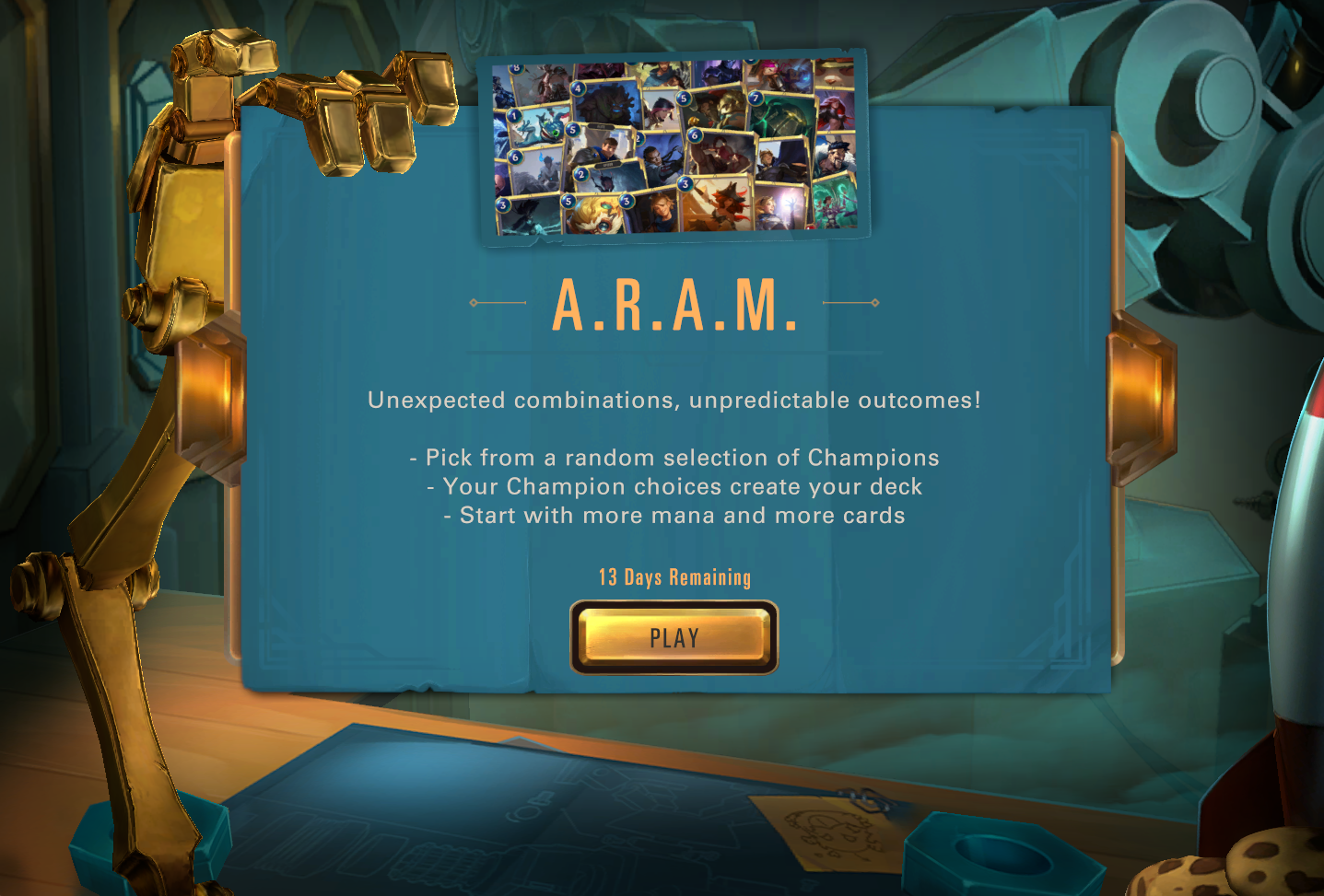 Legends of Runeterra Patch 1.5 brought a new casual mode, Labs, to the game. While there are no extra rewards for claiming victory, this alternate mode from Constructed, Gauntlet, and Expedition lets players participate in a low-competitive environment. Besides changing the fundamental rules of LoR, the pacing of Lab modes is much faster, letting you experience action and card play much sooner than the usual game modes.

The first experiment to debut with Lab is ARAM. Players start the game with the usual mulligan, having a choice between four champions. Any champions that are tossed are replaced with more champions. After the mulligan phase, players are given a random deck with cards based around the remaining champions, then draw two more cards.

Aside from having a random deck, both players also start with three mana, giving players extra decision-making power on how to do their mulligans since the ability to play powerful champions comes sooner. Another rule in the ARAM mode is that whenever a champion is destroyed, it’s shuffled back into the deck. This gives any champion the chance to return.

Since the game mode is random, finding victory consistently means improving your odds each turn and knowing which champions are strong. Thresh, Miss Fortune, Sejuani, and Zed are some of the champions you should aim to find. In addition to these champions being strong individually, they bring some strong synergy cards that let you do powerful things whenever you’re out of champions to play.

Champions that cost either three mana or lower can be played instantly, which gives you an opportunity to overrun an opponent in the early game. Thresh is especially powerful because leveling him up in this game mode can be a game-winning play. He’ll let you return slain champions from the deck more easily and potentially allow you to cheat a ton of mana in the process.

In similar fashion to LoR’s regular gameplay patterns, champions with odd costs should have a higher emphasis in the mulligan phase when going first, and even cost going second. This is especially true for champions that gain bonuses from attacking on the turn they’re played, like Miss Fortune, Zed and Draven for odd or Ashe or Sejuani for even.

Players have until LoR Patch 1.6 to experiment with ARAM before the next Lab augmentation arrives. LoR Patch 1.6 is scheduled to hit the live servers on July 22.