Legends of Runeterra: Cosmic Creation is the last expansion of the Call of the Mountain set and has finally had all of its cards revealed.

Additionally, the two newest mechanics associated with the newest champs, Viktor and Riven, have been introduced to the game. Both champions brought interesting keywords to match their League of Legends counterparts.

With two new keywords to learn, here’s what you can expect from each mechanic and some example cards to understand them better.

As the expansion that centers around creating cards, Augment pushes that identity forward with this new keyword. As a Piltover & Zaun exclusive mechanic, Augment gives any unit with the keyword a +1/+0 increase in stats every time its controller plays a card created by an ability. 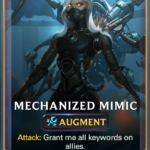 Cards are considered created when they were made by an effect, whether it’s random or specific, and it doesn’t matter if the card was a collectible in the collection. This means effects like Invoke, Avarosan Trapper, University of Piltover, and Ezreal are all considered creation abilities.

Viktor is at the forefront of this mechanic, needing his user to play eight created cards to level him up. Aside from needing created cards, Viktor also provides a cheap spell each turn to help aid in reaching his evolved form.

Since Augment only boosts the offensive stats of your units boasting the keyword, it’s more aggressively oriented and should be built with faster decks in mind.

To continue the creation theme, Reforge is a Noxus-only mechanic that’s themed around Riven’s blade and the time it takes to fix it. Whenever you activate a card’s Reforge ability, you gain one of three one-mana Blade Fragment burst spells that temporarily buff your units. Each time you Reforge, you’re unable to get a duplicate Blade fragment until you get each unique piece of the puzzle.

Once you activate all three fragments, you gain Blade of the Exile, which is a three-mana slow spell that combines all of the effects of the Blade Fragments into a permanent buff. The Blade of the Exile is tied to leveling up Riven. She levels up whenever she’s on your board and you have the weapon in your hand.

Due to the flexible and creative nature of Reforge, there are multiple avenues you can go when using this keyword. Since cheap spells are created, you can pair it up with Ionia and Lee Sin specifically to quickly level him up and activate your other Ionian cards that require multiple spell casts.

Since all of the Blade Fragments are buff spells, you can combine Riven with Taric and Targon to spread multiple buffs throughout your board and increase the power level of your units in a pinch during combat.

With Blade Fragments being a created subclass of cards, each time you cast a Blade Fragment, the previously mentioned Augment keyword would activate. Augment scales harder with cheaper cards, which makes Reforge and Augment a potent combination of abilities.

You can try to master these keywords when LoR: Cosmic Creation officially drops for PC and mobile tomorrow, Dec. 16.