The reveal season for Legends of Runeterra’s upcoming expansion Guardians of the Ancient is a few days away from wrapping up. In today’s teaser, Riot Games revealed eight new cards from Bilgewater, Shurima, and Piltover and Zaun in collaboration with Mobalytics. 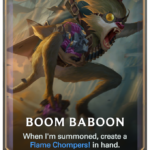 Boom Baboon is a Common two-mana 3/1 unit from Piltover and Zaun with an ability that creates a Flame Chompers in your hand when its summoned.

Glorious Evolution is an Epic five-mana Slow spell from Piltover and Zaun that replaces your cards everywhere with exact copies of themselves. After the replacement, their cost is reduced by one, they all gain the Augment keyword, and are now Tech units.

Shifting Sands is a Rare six-mana Slow spell from Shurima that deals four damage to a unit and summons two Sand Soldiers.

Treasure Seeker is a Common one-mana 2/1 unit from Shurima that creates a Waking Sands. As a reminder, Waking Sands is a two-mana Slow spell that summons a 5/2 Ephemeral unit.

The Time has Come is a Common five-mana Burst spell from Shurima that summons a 2/2 Clockling. If you predicted earlier in the game, you summon two instead.

Reaver’s Row is a Rare five-mana Landmark from Bilgewater that summons a random one-cost follower each time it counts down. Once the Countdown is completed after two turns, it will grant your one-cost allies +2/+1 and the Fearsome keywords.

Volunteer Elnuk is a Common three-mana 3/4 Elnuk unit from Piltover and Zaun that creates a random Elnuk in the top six cards of your deck when summoned.

Boom Baboon is a potent card for discard styled aggressive decks due to its ability to create more discard fodder. Flame Chompers is already found in some lists so there’s a fair chance Boom Baboon can contest some potential slots in discard aggro. In addition to this, Boom Baboon can snag a spot in Noxus and Piltover and Zaun lists that are slower than discard aggro like the popular Draven and Ezreal.

Glorious Evolution is an interesting card due to the massive scale it changes all of your playable cards, but it’s ultimately a meme. While the one-mana cost reduction on everything and the ability to make your units gain one bonus power each time you play a card sound potent, the fact that it costs 10 mana to cast puts you at a major tempo disadvantage to even consider being able to play the card.

Shifting Sands gives Shurima more selective removal through effect damage while providing more token summons. While the Sand Soldiers can be used offensively or defensively, Shurima is already effective at removing units due to the amount of Vulnerable granting cards it has.

In addition to this, Shifting Sands is a bit too expensive for what it’s aiming to do, and the Slow speed means it’s not possible to use it as a potent reaction tool.

Treasure Seeker is another aggressive minded one-drop from Shurima due to its aggressive statline and the ability to summon a 5/2 Ephemeral unit. While under most circumstances, the Waking Sands card provided is terrible, the fact that it can be used as discard fodder means Treasure Seeker’s ability still has potential use.

The Time Has Come allows you to summon 2/2 units at Burst speed to potentially defend or attack for you. While the concept sounds interesting, the fact that it’s only 4/4 stats for five mana split over two bodies makes it low in value and easy to be run over in combat.

Unless there’s more Clockling specific support that’s not Jagged Taskmaster, The Time Has Come could have a difficult time finding a spot in specific lists.

Reaver’s Row fits in the Bilgewater decks that aim to summon multiple one-cost units through effects like Jagged Taskmaster and Powder Monkeys. One detriment to Reaver’s Row’s chance at viability is its initial five-mana cost.

While summons occur during the countdown, allowing the Landmark to feasibly affect the board in the way, Reaver’s Row does nothing the turn it’s dropped and needs to wait two turns for the finishing board wide buff to happen, which allows the opponent to respond.

Line ‘Em Up has interesting varied uses due to its ability to summon a Powder Keg at burst speed. Even ignoring the free fleeting Knock ‘Em Down that is attached to it, Line ‘Em Up allows players to surprise opponents with unusual breakpoints for only two extra mana.

After using your Line ‘Em Up and free Powder Keg, there’s a chance that just holding the Knock ‘Em Down can dissuade your opponent from playing units with high value and low health.

Volunteer Elnuk adds LoR’s third Elnuk unit to Piltover and Zaun instead of Freljord. Since the deck relies on running over your opponent with Troop of Elnuks, the Volunteer Elnuk can guarantee an extra unit from your swarm summon as long as you fail to draw the randomly created Elnuk.

There’s also a chance that with the recently revealed Yeti and Poro that Call the Wild-styled decks can take off now as potential tutor-styled refuel.

With only two days left in the teaser season and Ekko still needing to be shown off, expect the Boy Who Shattered Time to show up to complete the reveals.

Try out these cards and more when LoR: Rise of the Underworld drops June 30.