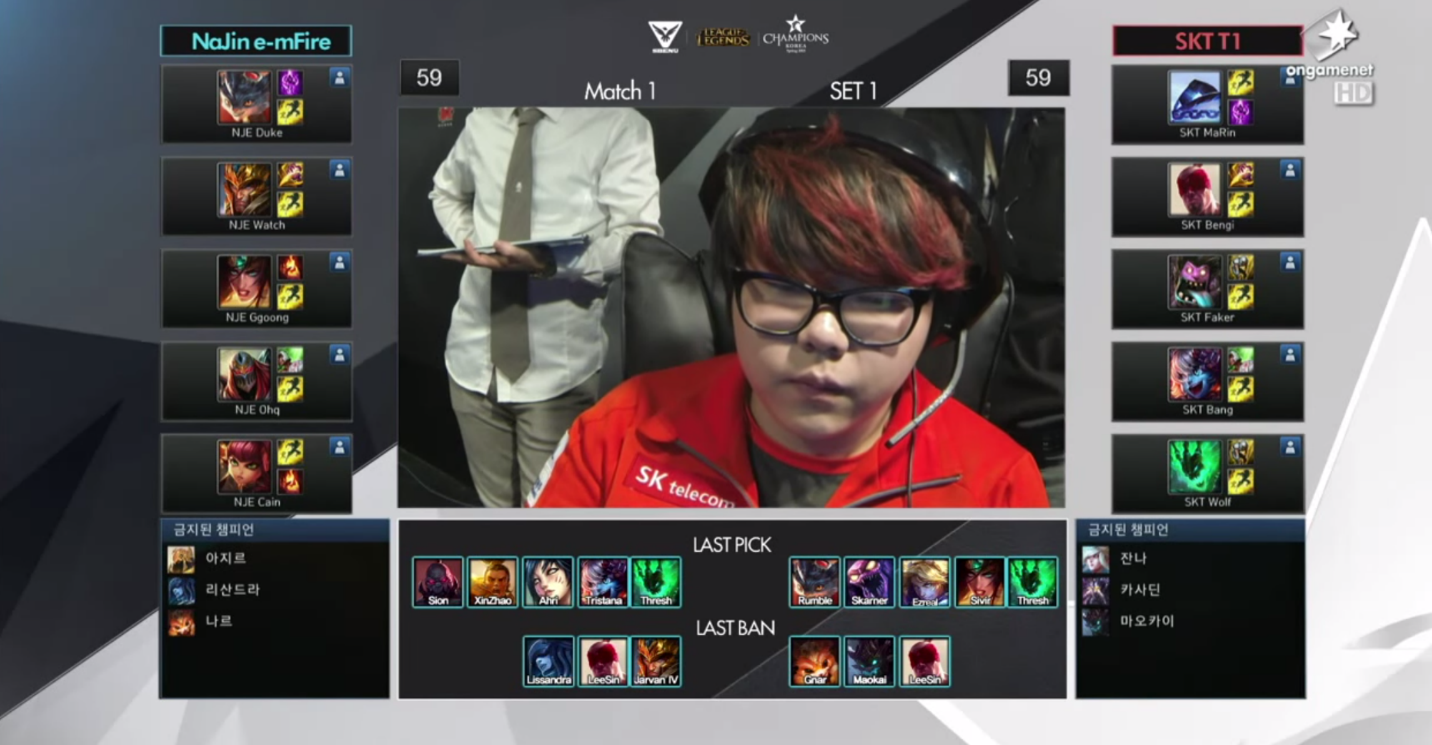 MOBA games offer a plethora of unique strategies and tactics on a game to game basis due to the diversity of character kits and how they can be applied. However, before the match can begin, the team comps must be created in what is designated as the Pick and Ban Phase. More than just the process of building team compositions, the Pick and Ban Phase is a conceptual match of chess where teams influence how their opponents play the game through manipulation. In this article, we will define key vocabulary to explain important concepts in this phase, and then evaluate picks and bans from League of Legends games to differentiate good picks and bans phases from bad.

In League of Legends, the Pick and Ban Phase is structured as so: the teams ban 3 champions each, alternating between each side. After the bans, each team gets three pick phases, two to select two champions, and one single pick. Blue side gets to grab one champion first as first pick, while Red’s side one pick is saved for last. Anyone who plays League of Legends Ranked mode knows this well enough, but it’s important to review as the order of these phases play a great role in how teams should pick and ban on each side respectively.

Before we discuss the quality of a Pick and Ban Phase, let’s establish terminology to summarize major concepts. We’ll explore these terms by separating them into their respective phases. Since Bans are the first thing to occur in a game of League of Legends, let’s go over Ban vocabulary.

Standard Ban: This is an average ban based on the current meta. If a champion is OP and popular, expect this to be banned unless blue side wants to first pick it. An example would be Alistar during Season 4 Worlds.

Target Ban: This is a ban that’s directed at a specific player’s champion pool, either to deny them a strong pick, or force them onto a weaker/specific champion. An example would be banning Vayne, Ezreal, and Lucian against Doublelift, as they are champions he is strong on.

Composition Ban: A ban that prevents the enemy team from countering a planned pick by removing the champion which would counter it. An example of this would be banning Janna when playing a heavy engage composition, as her peel can deny almost any engage. This is a more subtle ban, but it can be seen after a team creates their composition.

Throwaway Ban: A ban that seems out of place, this is usually used as a curveball in the Banning phase to force another team into an awkward first pick, or attempt to grab an OP pick first. An example of this would be banning Blitzcrank against a team that doesn’t use it

Shared Pick: A champion that either team could play.

Flexible Pick: shortened as “Flex Pick,” this is a pick that can be played in more than one role. These picks are strong because they don’t reveal the lane positions to the enemy team, and can be used to set up a counter pick. An example of this would be Morgana, as she can be played as Support, Mid, or Top by some players. Jin Air Green in the LCK is able to use Morgana as a three-way flex pick, giving them remarkable mind-game potential in Picks and Bans, as seen in their series against Samsung in Week 1 of LCK.

Safe Pick: A standard pick. The champion does well in a lot of match ups, lacks hard counters, but lacks the game-changing dynamic of an OP champion. An example of this would be Corki for ADC, because he has an escape in his kit, has a great laning phase, and fits into a lot of team comps.

Counter Pick: A champion pick that is meant to negate one of the enemy team’s picks. Usually reserved for solo lanes as those lanes have added emphasis on dueling. An example of this would be selecting to play a mobile assassin, like Leblanc or Zed, against an immobile skill-shot reliant mid-laner, like Xerath.

Pocket Pick: An out of meta pick that a team can field on a surprise basis, or as a back up when meta picks are not available. An example of this would be Alliance’s Shook playing Rammus at Season 4 worlds.

With our key terms in place, we can now go in to what separates a good Pick and Ban Phase from a bad one. A good Pick and Ban Phase utilizes standard bans and target bans to restrict the opponent’s options, while securing the correct priority picks and using flex picks to keep your opponents guessing. Teams can also demonstrate how much research they’ve done against the competition, by showing how efficient they are with their bans. Do two of their solo laners play Kassadin well? Then ban him, and you’ve removed a pick for two players on the enemy team, increasing your ban efficiency. This phase of the game should play out like a good mystery novel: you get leads on what the team wants to play, but only find out at the climatic last pick.

Now let’s look at an example of a bad banning phase from the LCK, and analyze why it is.

In the first game of LCK, we didn’t get so much of a murder mystery; more like an obnoxiously loud B-list horror movie, at least on the side of SK Telecom. Najin plays the banning phase well, attacking Faker’s champion pools by banning Lissandra and Azir, and then MaRin’s pool with a Gnar ban (which is also a standard ban) and then first picked Rumble. Rumble, in this case, was a shared pick between the two teams and so served as a priority pick. We should note that the efficiency of banning Lissandra is effectively doubled because it is a flex pick for SKT, and by banning it SKT is prevented from using it either top or mid.

SKT’s bans were a mix between standard and target bans, banning out Janna, Kassadin, and Maokai. Janna and Maokai, also shared between the two teams, were standard bans that aimed to help SKT’s late game comp scale and be able to attack by denying the peel from those two champs, who easily could’ve been first picked by Najin, and also hit Ggoong’s champ pool with the Kassadin ban. Where SKT erred was their first pick cycle: showing their hand, they pick Xerath for Faker. Xerath should not have been picked up so early because he was not an OP pick, nor was he a shared pick between Najin and SKT, meaning there was no reason to grab him so early. The Lee Sin pick up for Bengi was a safe pick.

Najin immediately punishes the Xerath pick by grabbing Jarvan and Sivir. This gives them heavy engage as Sivir gives her whole team a burst of speed, and Jarvan can lock down multiple foes for Rumble to ult. Najin secures this engage potential because Janna, who could dismantle their approaches, is already banned. SKT’s next pick phase nets them Mundo and Tristana, and their comp is already revealed: a late game scaling comp looking to stall using Xerath poke. It’s notable that SKT did not grab Thresh, a shared pick, in an attempt to manipulate Cain’s choice of support, as Najin had already selected their top laner and adc.

Najin close out the Pick phase with the perfect response to SKT’s comp. They lock in the counter pick Zed, who can get in close to Xerath and kill him in the laning phase, setting him behind, and the pocket pick Annie support. A popular pick after Season 3 worlds, support Annie has faded from popularity, but Najin’s Cain locks it in to further add AOE lockdown to an already stacked hard engage composition. Having banned Janna, SKT grabs the standard Thresh pick for support to add some peel to their comp.

Najin proceeded to demolish SKT, showing Faker that he can’t early pick such a passive mid laner against Ggoong, and earning Cain an Annie ban in the next couple of games. This ban phase was played poorly on the part of SKT, but well punished by Najin who caught SKT’s errors and pulled out their surprises. It’s weird (yet understandable) that SKT would commit such an error in Pick and Bans when they usually let Faker get counter-picks and have demonstrated a great understanding of this phase with excellent use of Flex Picks in prior games.

An example of a good Pick and Ban Phase can be found in Match two of Incredible Miracle (IM) and GE Tigers (GET) on the second day of LCK. As you can see, the bans for the game went like this: IM banned Kassadin, Jarvan, and Janna, while GET banned Rengar, Leblanc, and Elise. There are two things to note: first is that Gnar, a strong top lane pick, is open, and second, is that there are three junglers banned. IM’s jungler, Wisdom, has mainly played Lee Sin, Evelyn, and Elise. Elise was just banned by GET, and Evelyn is currently weak in the new jungle. Afraid of having their jungler denied any of his good picks, IM first picked Lee Sin, and GET immediately grabbed the open Gnar on red side. GET was alright with giving up the Lee Sin pick as their jungler, Lee, can play Pantheon, as demonstrated in the in the first game of this series.

GET further capitalizes on their clever Gnar pick up by locking Lissandra for mid lane. Lissandra is a safe mid laner to blind pick, and grabbing her ensures that GET has incredible lock down just in their solo lanes. IM’s next set of picks show the team buying time as they figure out what to do: they lock in Corki and Thresh for bottom lane, two standard picks, which could potentially kite out the Gnar-Liss lockdown (if Janna hadn’t been banned, it’s reasonable to say she would have been immediately picked after GET’s first picks).

With their CC heavy front-line secured, GET lock in Nami and Kogmaw, giving them late game damage and plenty of peel for said damage. IM then choose Rumble and Syndra as their solo laners. Syndra could potentially bully out Lissandra, negating that pick, but Rumble is known to struggle against Gnar. Perhaps, as the venerated Montecristo suggested, IM should have tried for a 1-3-1 split push team comp to split up the amazing team fighting comp of GET, but speculation is just that. For last pick, GET grabs Pantheon for their jungler, and with as much lockdown as they have, Pantheon can expect to man-drop all of IM.

GET’s Pick and Ban Phase was beautiful to behold as they mind gamed their opponents and were able to secure a powerful priority pick by placing pressure on IM’s small jungler champion pool. Perhaps more glorious was the dominating game GET played out, with their top laner, Smeb, demonstrating why you either ban Gnar or first pick him on blue side.

As demonstrated by the few examples pulled from the LCK, good Pick and Ban behaviors can be identified and utilized to set up an advantage for a team before the game even begins. This Phase of the Game can easily be summed up with a sentence or two, but the cunning of a team is revealed in its most cerebral form at this stage of the game. Players seeking to develop their understanding of the game can easily enhance it by developing their understanding of this important phase