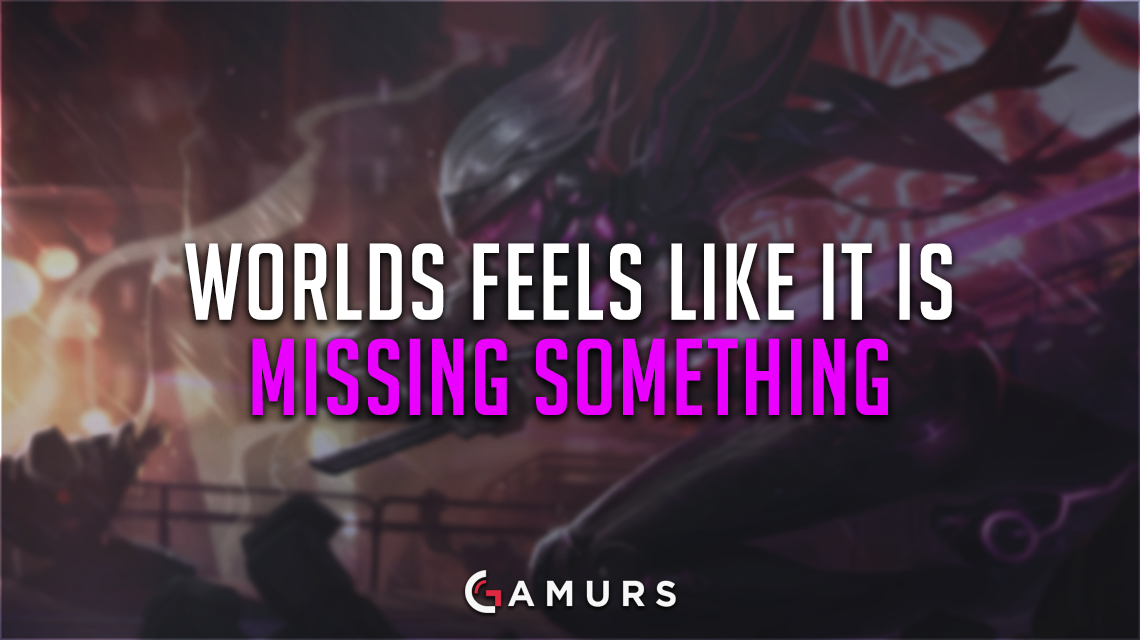 I can’t put my finger on it, but this year, it feels like something is missing from the League of Legends World Championships, and I know other people agree. After talking to several colleagues and other fans of the genre, I would say that overall ambitions and hype for the event seem to have diminished.

But what do you mean?

There does not seem to be any moments when I talk about Worlds 2016 this year where fans and friends are going “Oh my gosh, World Championships start tomorrow. I can’t wait.” No. It feels more like second guesses are coming out; that people are more, “Oh cool, do the World Championships start tomorrow?” There doesn’t seem to be any excitement about what should be the biggest event of the year; even MSI 2016 didn’t feel that hyped up until the whole G2 controversy.

The thing is, it isn’t just hype. It feels like something is lacking at Worlds this year and not just teams, like Fnatic, who have been a staple at the competition. When I think about it, Worlds as a whole seems to have lost its appeal to a large amount of its long-time fans. A few have come out saying the loss of long-time casters or the rise of other esports, like Overwatch, might be to blame.

It is more than that

The overall consensus from those I talked to about this topic revealed particular trends. I want to bring up all of these trends one-by-one and go into them in more detail, providing the positives and negatives, as well as my personal feelings towards them.

Note: I’m aware what I write may come off as false, or some of the examples I will give will be discredited due to the nature of the topic. I ask those reading and commenting to have an open mind and come at the discussion critically and not go into it with a closed mind. Take the terms as you will; it would be nice to have a better discussion on the topics at hand.

This is not so much a problem, but I think the whole topic can become too stale. At Worlds 2015, there were so many games with similar team compositions and plays going out. At times, it felt like the opening few minutes were just replays of particular games.

As an esport, the game has to be exciting to become a true powerhouse. If a game isn’t visually exciting, then the audience will nod off and turn their attention to something that is. As such, there’s only so much you can do as a pro player to offer excitement to the viewers when you are trying to win, especially when the only way to win is to choose the champions that are strong on that particular patch.

But when a player picks an unexpected champion (or when the demon Teemo even hovers), this is when fans get excited to see something different. That kind of drama of the unknown is something that would pull attention. I can’t tell you how many times I have watched this video below.

“What is the point in watching if an LCK team is going to win anyway?”

A lot of people I talk to hate watching Worlds or any international competition if they support a home turf team due to the dominance of one particular organization over the other. Worlds 2015 was different in the fact that many believed it would be an SKT vs. Fnatic final, and the fact Fnatic fell with so much hype behind them drew in an excitement factor. Many thought the KOO Tigers at the time could give SKT a run for their money, but in the end, it was still an LCK team vs. an LCK team.

Many trends from last year are following into this year, with TSM now the home region favorites to reach the final. But the overall consensus is the same: NA fans are expecting them to get to the finals. They don’t expect them to win. Many fans have left the scene due to Korean dominance in all fields, and unless you support the LCK or are an avid follower of the other LCS regions, many would drop out of international competitions when the winner, to them, is so obvious.

This is the kicker for me. For any sport to be entertaining, you need to entice the viewer to watch your sport. If the viewer is bored or there is no entertainment factor, then viewership numbers will dwindle.  A few individuals I have talked to have said they only have it on in the background. They don’t really watch it, but have it there so they can talk to their friends about it when out socially. They aren’t actively watching the show, it’s just background noise to them.

I feel this plays on what I said before about expectations. Any long term fan knows what champs will be picked per match, so there isn’t really much suspense or excitement to look forward to. Things are becoming too similar and it is a bad trend to follow.

Alas, this all could change for the upcoming Worlds 2016. I guess we will just have to wait and see.

Are you excited for Worlds 2016 to start? Let us know by commenting below or tweeting us @GAMURScom.