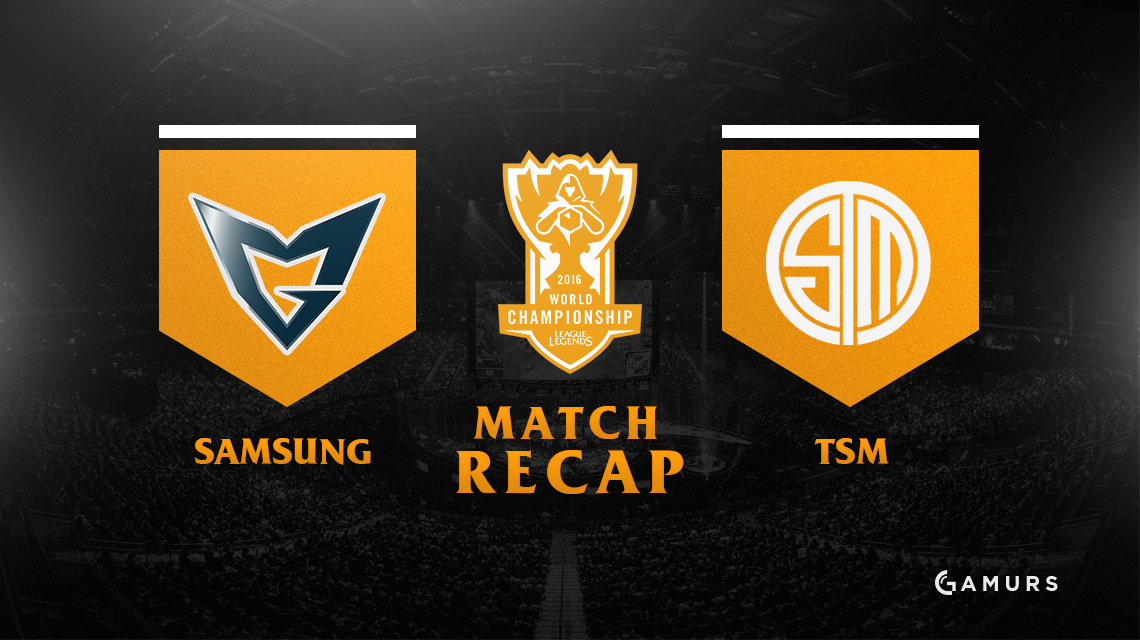 A recap of the Group Play match between Team SoloMid (NA LCS) and Samsung Galaxy (LCK).

Samsung Galaxy got the lead early with Dennis “Svenskeren” Johnsen falling first after attempting to steal the enemy blue buff. This also resulted in Kevin “Hauntzer” Yarnell dying after being left in a 2v1 after losing his jungler. Soren “Bjergsen” Bjerg died in the mid-lane in a 1v1 situation, which gave SSG a 3-1 kill lead. Though a strong outplay in the bottom lane for TSM (the only lane that was not losing) put them ahead in the game and got TSM the first tower of the game.

Svenskeren and the rest of TSM maintained a decent gold lead, with Svenskeren winning two smite battles in a row for the SSG red buff. TSM also took the first dragon of the game and held onto a 6-5 kill lead. Soon after this, though, SSG was able to take down three members of TSM and that allowed SSG to get a Baron and Dragon, which put them in the driver’s seat with a small gold lead.

The early part of the late-game consisted of both teams dancing around each other while looking for control of the space surrounding the Baron. Due to waves pushing in the bottom lane, SSG was able to take their second Dragon of the game uncontested. Soon enough, though, a team fight in the mid-lane broke out with TSM dealing a ton of damage thanks to a great engage from Hauntzer, who dealt a massive amount of damage to the SSG back line, which was cleaned up by Peter “Doublelift” Peng. Though the next team fight was won by SSG, who then took a Baron off of the fight and pushed all the way to the Nexus turrets before being pushed back. TSM looked towards the Elder Dragon to get them back in the game, but SSG stole it and pushed into the TSM base for the final time, securing the game.