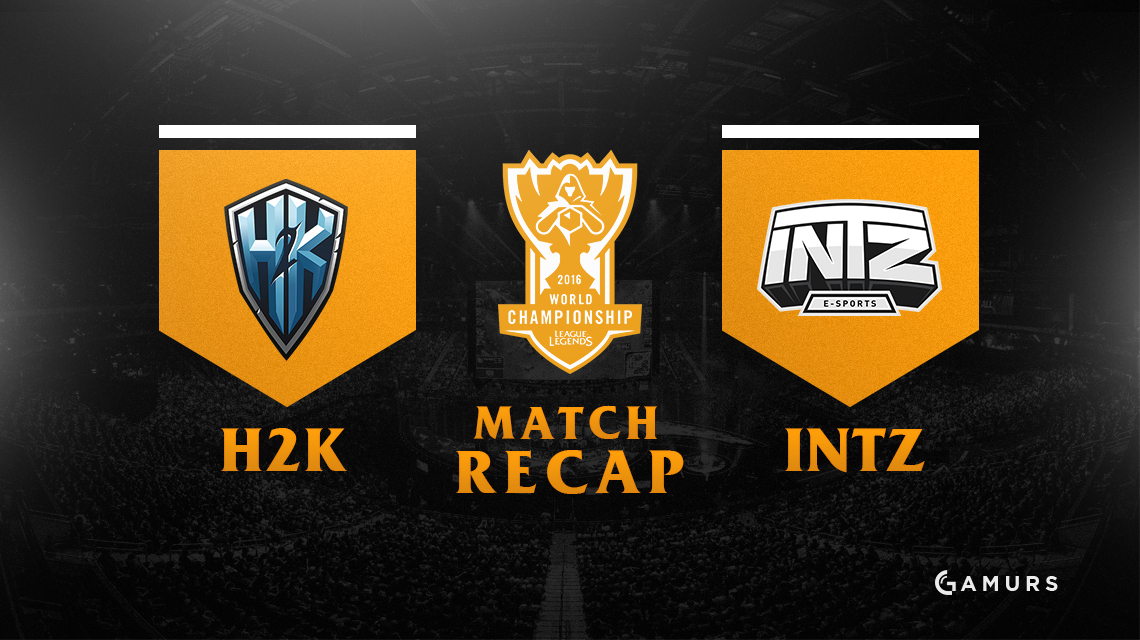 With EU being 0-4 so far in Worlds, H2K had a lot of pressure on their back to win a game for their region. Going up against Wildcard team INTZ e-Sports, who surprisingly took a win yesterday over EDward Gaming, H2K had an uphill battle.

H2K picked a strong teamfighting composition that allowed the team to stack CC while Caitlyn reigned down fire from the backline, while INTZ had the same strategy in mind.

Heading into the rift, both teams kept to themselves for the most part and farmed where they could. A few ganks happened here and there from both junglers, but nothing came out of them. Around seven minutes in, however, H2K had a gold lead of almost 1k solely based on farm.

Nothing noteworthy happened until the 11-minute mark, when H2K used three ultimates to attempt to kill Tockers, but Jockster saved him and kept the kills tied at 0-0. H2K used their advantage to take a Mountain Drake and pushed their gold lead to 2.3k.

At the 18-minute mark, H2K shoved INTZ into their mid tower and chased them towards the jungle, where Ryu caught Jockster with an ult to secure first blood for H2K. Not long after, Jankos and Odoamne caught out Revolta and Jockster to increase H2K’s lead to 3-0.

H2K gave INTZ a Mountain Drake in order to secure mid tower. After taking mid tower, Jankos flew in from the jungle to surprise ult Tockers for another kill for H2K. INTZ managed to get a kill on Jankos, but Jankos retaliated and did to mica0 what he did to Tockers.

Pushing to Baron, Jankos was locked into a Smite duel with Revolta and won. With Baron, H2K shoved down mid lane once again in order to take an inhibitor. After regrouping, H2K shoved top lane to force INTZ’s hand, which resulted in H2K getting four kills, allowing them to push into INTZ’s base and finish the game.

What did you think about the action so far today at Worlds? Let us know by commenting below or tweeting us @GAMURScom.