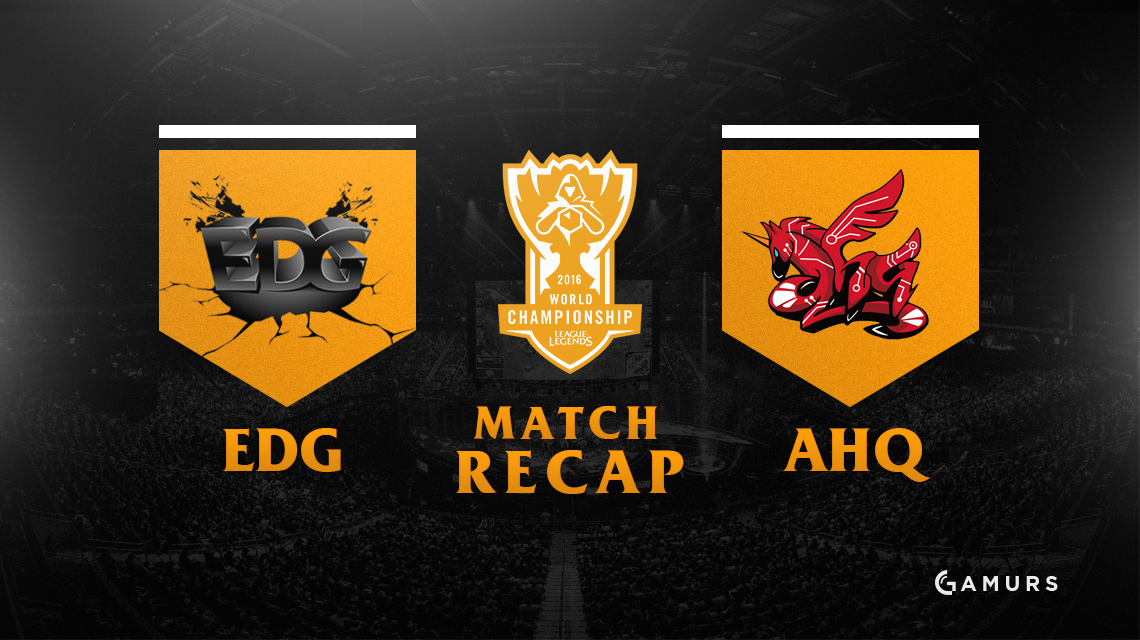 The final game of day two of the League of Legends World Championship pit EDward Gaming against ahq e-Sports Club. Ahq subbed in a new mid laner, Chawy, for his first professional game in six months. Now he has to represent himself on the World stage.

EDG went for a very fast paced composition while AHQ went for an all-in/CC hybrid style comp. Both of these teams have scrimmed hundreds of times before, and this game showed it.

Right off the bat, action exploded around the map. EDG forced two summoners at bot lane at the cost of two of their own. Meiko of EDG tried to ward but got caught out with no flash, forcing Deft to burn heal to save him.

Heading into laning phase, Clearlove flew out of the jungle at level two and secured an early first blood for EDG on Chawy. Not long after, Clearlove moved bottom lane and gave Deft a kill on AN. Retaliating EDG’s aggression, AHQ made a push to secure first tower gold, giving them a lead in gold despite being down two kills.

With Clearlove being everywhere on the map, AN and Albis were forced to sit under turret in constant fear of a flying horse from the fog-of-war.

AHQ managed to catch Pawn with enough CC to get Chawy a kill, but EDG quickly retaliated and killed Mountain through his Ragnarok and Chawy’s Chronophage. With the score now at 4-2, EDG took a 700 gold lead.

Taking the opportunity, AHQ secured an Ocean Drake. At this point, Deft was 2-0 and an entire item ahead of AN, which allowed him free reign of lane farm while AN couldn’t contest him.

As EDG move into top lane, Deft almost killed AN, but AN used both summoners to live. Clearlove came from the jungle to get a kill for EDG as they took top tower. Now they moved towards Baron, daring AHQ to try something. Clearlove took Baron and EDG peeled AHQ off and now owned the Baron buff on all five of their members.

While EDG was trying to force bottom lane, Ziv of AHQ got a huge Equalizer off while the rest of the team follow up to kill Mouse and Deft. Clearlove managed to escape after being hit by a full Ashe arrow. AHQ closed the gold differential and brought it from 4k in EDG’s favour to 2k.

Onto the third dragon, EDG obtained a second Ocean Drake for themselves. As Clearlove and Mouse took down Ziv in the bot lane, Chawy and AN killed Pawn in the mid lane. The score was 6-5 in EDG’s favour with a 2k gold lead. Both teams reset, pushed lanes and tried to gain vision control.

EDG made a move to take Elder Dragon and AHQ tried to take Baron. After EDG took Elder, they rushed to Baron to stop AHQ, killing Albis in the process. As EDG started Baron, AHQ made a 4v5 attempt against an Elder Dragoned EDG, resulting in EDG near acing AHQ.

With a final push into the base of AHQ, EDG secured the final game of day two.

What did you think about the action so far today at Worlds? Let us know by commenting below or tweeting us @GAMURScom.