We hear it all the time from LCS casters. “e-sports is the fastest growing sport in the west.” Indeed, it is growing fast. But can e-sports become a major american sport like the hype train believes? Possibly. Will League of Legends be that sport? No.

League of Legends (henceforth referred to as LoL) has a severe factor that will never allow it to become the E-sport game that wins America’s plaque filled hearts. LoL will be a sport that almost only pulls viewership from it’s own player base. That player base, much like World of Warcraft before it, is about to, or already has hit it’s saturation point. This leaves LoL with little room to grow.

Lets look at why LoL will always only appeal to it’s own player-base.

IT’S COMPLICATED
LoL is a complicated game. As a Massive Online Battle Arena (MOBA) one needs to know the ins-n-outs of maps, terminology, pick and bans, and all the abilities and uses of over 100 playable characters in order to truly appreciate and enjoy professional play. This takes time delving into the game. Only a handful of people could spend so many hours and days learning a sport 10x more complicated than American Football without just playing it first.

BACK IN MY DAY…
Unlike major televised sports, LoL does not cross generations. You could watch a hockey game from 20 years ago and understand it the same way you can a game today. LoL sometimes has huge shifts due to patching every season or even multiple times in a season. Watching a LoL tournament match from season one is almost unrecognizable to a tournament match today. While this is a complexity we appreciate, it does little to help grow the sport in terms of spectators.

ETHNIC-CULTURAL DIVIDES
LoL is a game of privilege and white (Asian-ethnic by extension) culture. As are almost all E-Sports played on PCs. Black and Hispanic American cultures prefer consoles to PCs for entertainment. Consoles provide a much more in-person community appeal. Having friends or family over and sharing in a game on one screen is much more acceptable in those cultures then being buried in a monitor yelling into a mic. Also, a console has a feeling of something that can be unplugged and moved with other belongings quickly or even a sense of resale value that is important to a culture that grew in poverty. If a game can not reach these large groups of minorities, it will never sweep the nation. Much like Mitt Romney in 2012, LoL will never make it to the big times because minorities just don’t like it.

RITO PLZ
Riot has had a poor track record in it’s dealings with the press and journalists. It’s important that a sport league have healthy ways of releasing news to the public. With this negative image, Riot will always have trouble finding and keeping good press and journalistic integrity to share it’s stories of LoL to the world in an attractive way.

Also in Riot’s portfolio of poor track record: Sponsorship! LCS nailed some big name sponsors in the past (ie. Cokezero, Coke, Game of thrones, HBO, etc…) but never utilized it well. advertising for those brands were weak, and little investment seemed to be made in return as production values stagnated and infrastructure seemed little changed as well. Perhaps LCS should start seeking similar sponsorship as pod casts; since unlike baseball, LoL matches are streamed on free sites with little advertisement space or time to be had.

WHAT’S THE GOODS
This all has shown that LoL has little to no room for viewership to grow. But LoL is still important to the future of E-Sports as a major american pastime. LoL has and can continue to lay the foundation for a healthy E-Sport model.

LCS has slowly been growing salaries for it’s star players to a healthy living. It has begun setting up infrastructure that supports coaching talent and team management. LCS has invested well into pre-game programming and post game analysis content. All this and more.

LoL may never be a major sport in America, but it will have a grand and respected legacy for the E-Sport that does. 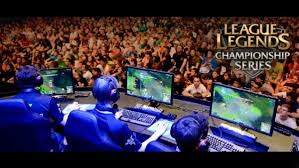