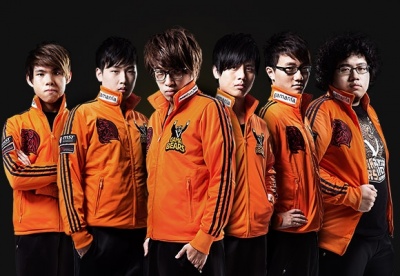 Last year, 14 teams battled for the Summoner’s Cup at the Staples Center in Los Angeles. This year, 16 teams will vie for the Season 4 title in Seoul, the mecca of e-sports. Want to hear a crazy fact? Of this year’s 16 teams, only 4 played in last year’s World Championships and returned with one or fewer roster swaps. (Cloud9, Fnatic, OMG, and Samsung White) Besides those 4, 2 other organizations are also returning to the World Championships but only after making extensive roster adjustments. (TSM and Royal Club field only a single player from their squads.)

Blown to the Winds:

The Gama Bears entered the World Championships extremely confident. Although it was not widely publicized, the Gama Bears were essentially a SEA “super-team” of the region’s best players. Top laner Steak went so far as to claim he would “eat shit” if the team lost. After a 2-0 drubbing at the hands of eventual champion SKT, the team would leave the Gama Bears organization to join the yoe Flash Wolves. However, the team’s star jungler Winds would leave to join the Taipei Snipers before eventually qualify for Worlds with the Assassins. The team’s other star, mid-laner Maple, was prohibited from playing at the World Championships due to Riot’s “17 & above” age rule. Consequently, the Flash Wolves failed to qualify for the World Championships.

NaJin Sword made it to Worlds last season on the back of their OGN Winter victory (when they had star top laner MaKNoon) and their back-to-back NLB tournament wins. The team was not expected to perform well without their infamous captain but Nagne’s Gragas and Nidalee were a total revelation. They would defeat Gambit before falling 3-2 to the eventual champion SKT. The team returned to Korea in the hopes of building off of their strong play, but failed to leave the group stage of OGN once again. Eventually, top laner Expession would retire due to chronic illness and jungler watch would be transferred to NaJin Shield (where he became the only player to reach all three world championships.) Nagne and PraY were removed from the team and it’s been left up to star support Cain to lead a youth movement headlined by star AD Carry ohq.

Planet Vulcun has been destroyed:

Although Vulcun’s unfortunate late game at Worlds led to their nickname as the “Vulcun Throwbargains,” the team’s impressive early game and usage of global ultimates had many critics slotting them in as a top 3 returner in the NA Spring Split. An ill-advised roleswap between Zuna and Xmithie shook the team’s previously impressive synergy and the loss of star support Bloodwater destabilized the team for the rest of the season. XDG would get crushed 3-0 by LMQ in relegations. Zuna and Benny both retired (although Zuna enjoyed a successful stint as CLG coach, saving them from relegations.) Xmithie bounced around various Challenger teams and returned to XDG for promotions. Mancloud played on Curse Academy before being replaced by Keane for promotions.

The Lemondogs entered the World Championships as one of the most hyped teams from Europe. Their young and talented lineup of Zorozero, dexter, nukeduck, Tabzz, and mithy were all considered rising stars at their positions. To this day, mithy has the best regular season win rate of any player in Europe. They managed a respectable third in a group with OMG and SKT, but they did not succeed in entering the Round of 8. Most fans expected them to continue their success in Season 4, but the trio of Zorozero, nukeduck, and mithy would shockingly leave Lemondogs to play with Freeze and hyrqbot. Not only would they be relegated by ROCCAT, but they would fail again vs. Millennium the season after. Zorozero decided to take a break from LoL. Nukeduck and mithy tried to reform NiP with Gambit star Alex Ich but they were banned by Riot for toxicity. Tabzz would join Froggen’s superteam Alliance and is currently playing in the World Championships. Dexter moved to America to play for CLG, where he would enjoy brief success but ultimately fail to requalify for the World Championships.

After a respectable 2-1 loss to NaJin Black Sword, it’s surprising that the biggest excitement for Gambit occurred not during, but after the World Championships. Star support Edward would return from his ill-fated stint with Curse and Gambit would run roughshod over starry names Cloud9 and Fnatic at IEM Cologne. They would continue their dominance by crushing XDG at the Battle of the Atlantic using bizarre picks like top lane Warwick and support Amumu. To observers, it looked like Gambit had definitely returned. Unfortunately, the team’s dominant play was brought to a shocking halt after multiple roadblocks. First, Gambit would fall at the IEM World Championships to KTB in a nailbiting 2-0. (KTB won a 60+ minute Game 1 with a backdoor.) Later on, the infamous “remake” against SK would drop Gambit out of a top 2 seed and into a matchup with Team ROCCAT. Roccat would upset Gambit 2-0 in the semi-finals and send the classic Gambit lineup to their first tournament finish outside of the top 4. In the offseason, Alex Ich would leave Gambit to reform NiP with mithy, Nukeduck, k0u, and Freeze. Unfortunately, Riot would promptly ban half of his team. Alex’s NiP squad would fail to qualify for the LCCS and subsequently disband. In the summer split, Gambit would bench Darien in favor of Kubon. Eventually, Genja would also step down from his starting role, citing a desire to recharge.

SKT would continue their Worlds dominance with an undefeated run through OGN Winter. It looked like SKT would be the best team in the world forever. However, star support and team captain PoohManDu would step down to try and deal with his recurring health issues. His support, Casper, was not up to scratch and SKT began dropping their first games in months. Although Pooh returned, he was never his old self. Star jungler bengi would also suffer a drastic drop-off in his play because he was unable to deal with the new metagame. Eventually, SKT would fail to qualify for the World Championships after losing back-to-back series to Samsung White and NaJin White Shield. Shortly after, PoohManDu and Piglet were kicked from SKT. Pooh will return to his studies and Piglet is weighing his options before returning to his professional career. With these swaps, it looks like Impact, bengi, and Faker are guaranteed to play for SKT in OGN Winter. (Teams that keep less than 3 players will lose their automatic OGN berth.)

Season 3 Worlds fan favorites Mineski would also disband, with various members joining teams such as the Manilla Eagles and the Imperial Pro Team.

Of TSM and Royal Club, only Dyrus and UZI respectively remain on their team’s starting rosters.

EDIT: I’ve been informed that TSM also kept WildTurtle from their S3 Worlds squad. This was a big oversight on my part, thank you!