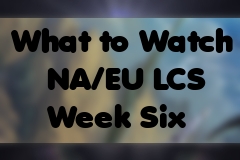 As predicted, the week was full of close games, which made for a miserable week for predictions.  Highlighted by a ridiculous win, Liquid over TSM typified the crazy throws and near throws we saw all week.  2/10 in EU, 4/10 in NA.  Let’s see if this week is any easier to predict.

With so many matchups going contrary to expectations, this week actually becomes more interesting, as some of the mid tier teams are surging while some of the presumed top teams are struggling with various weaknesses.  If anything I expect to see less complacency this week, which makes for good games.

Game to Watch:  SK suffered two losses, and will now face a 5/5 Unicorns team which, if it shows up, will make it a great match.  However if their last match is any indicator, the game to watch this week is the Gambit vs Copenhagen Wolves.  Last time was a blood bath, and both teams are looking in their best form of the split so far.

Game to Watch:  Again the Wolves are the ones to watch, as their match against Fnatic has some interesting implications.  The Wolves sit in third behind Fnatic, and would jump to one of the highest ranks their organization has seen if they manage to take down Fnatic if both teams win their day one matches.  Gambit is also poised to jump up the standings, though their match here against Roccat will be more interesting in its stat line than in actual gameplay.
(Had you told me at the start of the split that an Elements vs SK game would be third on my watch list, I wouldn’t have believed you, but here we are.)

Game to Watch:  Team Liquid vs Gravity has to be the game to watch.  With the students beating the masters last time around, (and Cop getting some sweet revenge on his replacement) Liquid looks much stronger with their benching of the struggling Piglet.  Popcorn match to be sure.

Game to Watch:  Last season the CLG vs Curse matches were always exciting, this season the newly minted Team Liquid is looking better than they ever did last season now that they are playing to their strengths.  Even in their loss to Winterfox last week they looked much stronger than before.  CLG is still in excellent shape despite picking up a third loss.  Regardless of the outcome this will be a good match.

Both sides of the Atlantic we’ve seen some exciting evolution as the split has progressed.  Favorites have fallen from grace, underdogs have shaken off early jitters.  As we progress into the second half of the split I expect the games to only get better.