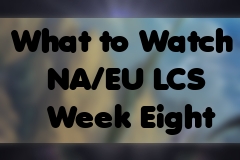 LCS is back!  As much fun as IEM was, I’m excited to see how the rest of the spring split plays out.  Last week I was 5/10 EU and 7/10 NA, and with so much time to prepare for their opponents I expect this week to be highly competitive once again.  Europe was shut down at IEM in somewhat brutal fashion, as was Cloud 9 from NA, but with TSM taking home the trophy, both regions have something to look to for improvement.  Even in a loss a team facing a diverse field gains a great deal of insight and valuable experience that’s not available to teams who sat on the side lines.  I especially think Gambit and SK will come away stronger, so it will be exciting to see how their styles have changed as we head into the playoffs.

Oh, and did I mention we get to see the TSM/CLG rematch this week?

Game to Watch:  The Copenhagen Wolves and the Unicorns of Love stand tied for fifth place, and would both like to make it to fourth to avoid a very dangerous playoff seed.  Last time they fought CW came out on top due to a solid Cassiopia from Soren and an insane Draven from Freeze.  You can expect the Draven ban, but otherwise the game will be unpredictable.  It was a bloody affair last time, this one will be bloody and have playoff implications, so it’ll be a good one.

Game to Watch:  Elements and Gambit look very different in terms of line up than when they last faced each other.  I don’t have a lot of hope for Elements, as their roster swaps have not alleviated their core problems, while Gambit have since upgraded their midlaner and gone on a tear.  If NiQ could go 2/0/5 during their last win against Elements, what will happen this time?  Should Elements lose here, they will be in a position where another loss will threaten them with relegation.  SK vs CW will also be great, but there is less on the line there, so I give the only-one-game nod to El v GMB.

Game to Watch:  Which team shows up this week?  Both Liquid and Cloud 9 have been all over the map performance wise.  I’d like to see Liquid bench Piglet and Cloud 9 bounce back from a tough IEM tournament and we’d see some high level play, but the reality is neither team has shown top caliber play recently, despite clearly being capable.  If Liquid wins here they can cruise into a solid playoff position.  C9 have to win here to have a shot at a high seed, as the rest of their schedule is tough.

Game to Watch:  Counter Logic Gaming and Team SoloMid both put on a show last time, with a clash that lived up to the hype.  I expect this time to be no different as CLG looks stronger every week, and TSM are fresh off an insane performance at IEM.  TSM played better than they have since their victory over Star Horn Royal Club at Worlds last year.  This should be a great match as always between these organizations, and with roughly even schedules going into playoffs, this game could easily be a prelude to the Spring Split final.