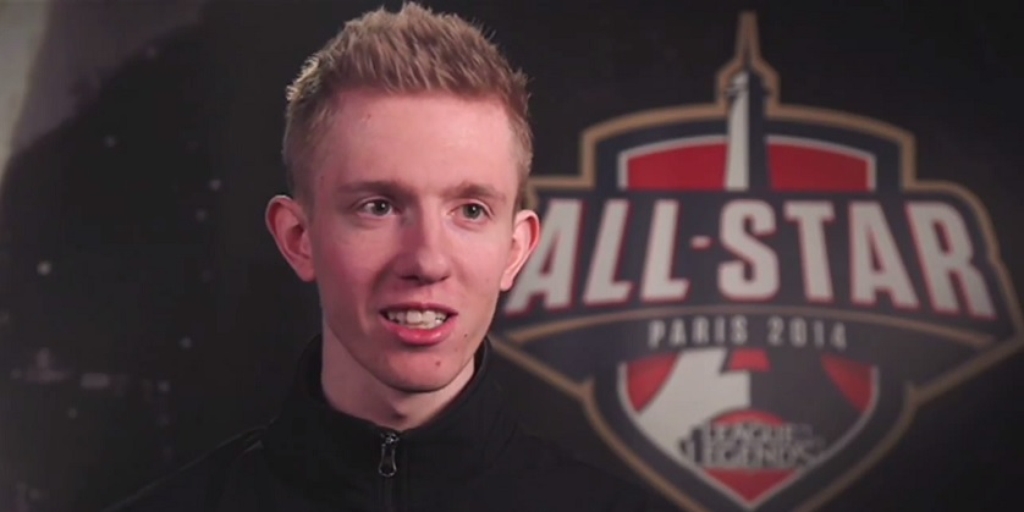 One of the most popular players in League of Legends history, current Elements mid laner Froggen is coming off of the most unsuccessful season of his career. Although his teams have traditionally been European powerhouses, his Season 5 Elements teams underperformed with back-to-back 7th place finishes in spite of constant roster swaps. But even after changing his teammates nearly once a month, Elements never built up the same synergy that Froggen’s CLG.EU and Alliance teams had. Froggen’s teammates frequently underperformed, and even his individually talented teammates, such as Spring split AD Carry Rekkles, failed to synergize with the Danish mid laner.

To make matters worse, Froggen himself seemed to struggle with the changing mid-lane meta at times. His trademark style of punishing mistakes and farming up for the late game increasingly fell by the wayside. In particular, the stacking dragon buff frequently hurt Elements. Because Froggen so frequently avoided early game fights, Elements were constantly forced them into unfavorable late game fights to stave off opponents from the critical fifth dragon buff. Considering Froggen’s long career, it’s possible that the years of meta shifts have finally worn-down one of the most consistent players in League of Legends history.

However, Froggen’s incredible statistics suggest that in spite of his clear-cut weaknesses, Froggen remains one of the most skilled individual players in the region. This season showed that Froggen, no longer at the peak of his powers, isn’t capable of carrying any group of teammates. But a team carefully built around the Danish star could bring Froggen back to the forefront of League of Legends.

Froggen remains one of the most devastating teamfighters in League of Legends. In the Summer split, the European mid laner dealt the second highest damage per minute in his region (after PePiiNero) and dealt the largest percentage of his team’s damage. A large part of Froggen’s success in teamfights comes from his love of late-game oriented champions, such as Kog’Maw, Vladimir, and Azir. Historically, Froggen’s best champions have also been late-game oriented. Arguably his three most famous champions, Anivia, Lux, and Karthus, are all damage-heavy picks that may even come back into the meta in Season 6. If a team has Froggen, they can load a higher number of utility oriented teamfighters than normal. Considering his ridiculous ability to deal damage, his teammates can succeed just by supporting him.

The other most notable attribute of Froggen’s gameplay is his dominant laning phase. Froggen excels at last hitting and poking his opponents out of lane. This may seem at odds with his love of late game champions, but Froggen’s laning often complements his champion selection. Even by picking late-game picks, Froggen is still able to come out ahead of his opponents. Last split, Froggen led all mid-laners in gold at 10 minutes, finishing with over double the gold lead of the second place finisher (Ryu), according to OraclesElixir.com. A big part of this is because many of Froggen’s favorite picks, although weak in the early game, are ranged champions with poke spells. Froggen is famous for arguing that the passive Karthus is a counter to LeBlanc, one of the deadliest assassins in the game. Due to his conservative mentality, Froggen rarely puts himself at risks and repeatedly punishes his opponents mistakes. Because he almost never fully goes on the offensive (often simply poking his opponents out of lane instead of outright going for kills) Froggen is a master at building up individual leads without much jungle help.

These two strengths combined paint a pretty clear picture of what Froggen brings to the team. Froggen is a strong late-game teamfight carry who can consistently win lane and rarely needs jungle attention to succeed.

However, Froggen’s unique brand of League of Legends also comes with it’s own weaknesses. One of the most obvious stems from his reluctance to all-in his opponents for kills. Because Froggen simply strives to punish his opponent’s mistakes in the early game rather than actively putting them into bad scenarios, he will enter the teamfight phase ahead of his opponents, but he will rarely put them at a significant disadvantage. Mid laners such as Febiven who snowball off of kills can build up big gold and experience advantages heading into the mid game. Froggen usually only builds up a sizable gold lead.

Going hand-in-hand with Froggen’s passive laning phase is his reluctance to roam in the early stages of the game. It’s important to note that late-game Froggen will consistently make plays with his large gold leads, but Froggen’s high valuation of early-game gold and experience means that his aggressiveness usually doesn’t kick in until after the 20 minute mark. This will put Froggen’s teammates at a notable disadvantage. Even if his opponent’s roams fail, the pressure might cause his teammates to fall behind in CS or to even give up the important stacking dragon buff. This lack of early game pressure is increased by his love of late-game picks. In matchups such as LeBlanc vs. Kog’Maw, it’s very difficult, if not outright impossible, for Froggen to roam against his opponents.

Froggen’s final notable issue is his seeming inability to shotcall. Many of Froggen’s teams have had poor shotcalling, even his most successful ones. CLG.EU, although occasionally clever strategically, usually simply defaulted to a heuristic of waiting for the late game. Froggen’s other successful team, Alliance, was extremely similar. Considering the fact that Froggen has played on every single one of these teams, it should be clear that Froggen’s shotcalling is either bad (if he is making these calls himself) or he is a reluctant or unable shotcaller (if his teammates are making these bad calls, but he isn’t speaking up to remedy them.)

What kind of teammates does Froggen need?

With a clear framework of Froggen’s game, it should be easy to find teammates that can emphasize his strengths and cover his weaknesses. It’s important to note that even on Froggen’s most successful teams, there were some players that did not fit in well with the team dynamic. For instance, although Wickd was a crucial part of CLG.EU’s success, he was often a liability on Alliance due to his untamed aggression. As a result, while using his best teams as a model is appropriate, it’s important to not simply look for players identical to Froggen’s teammates on successful lineups.

One of Froggen’s greatest strengths is his independence in lane. While most teams tend to focus on their mid-jungle synergy, Froggen can instead play with a farm-oriented jungler who prefers to build up a strong lead during teamfights. Both CLG.EU and Alliance featured farm-heavy junglers. While Snoopeh was a dedicated teamfighter on champions such as his beloved Amumu, Shook’s inconsistency meant that he often simply defaulted to farming up for the late game when his attempts to snowball the early game failed. Froggen’s independence allows him to enable his jungler to become a strong carry by themselves. An ideal jungler would include players such as Season 3 Meteos who could take advantage and farm up to become a carry in their own right.

Similarly, Froggen’s high damage nature means that stable utility players could easily find a role on his teams. Players that can win lane and stay safe (from the roaming opposing mid laner) would fit perfectly alongside Froggen. On CLG.EU, yellowpete’s late game damage output wasn’t stellar, but it was consistent. Although he was never a strong AD, he provided the utility and tertiary firepower the team needed to succeed. On Alliance, the team often struggled because Wickd’s desire to carry meant that the team often lacked crucial utility play. The addition of Rekkles in Season 5 was supposed to help remedy this problem, and it would have, had Alliance not simply switched out one weakness for another.

Due to Froggen’s lack of early game pressure, it’s crucial that one of his teammates is an early game playmaker who can draw attention to themselves. Although Froggen himself is generally able to avoid jungle ganks, teams that avoid ganking Froggen to target the side lanes can cause problems for his teammates. In games where the jungler ignores the mid lane, the fact that Froggen rarely kills his lane opponents means that it’s hard for him to abuse the 1v1 match-up – even if he accumulates large gold leads his teammates will have suffered equally from the jungle pressure. Things get worse when his lane opponents roam – the combined fact that Froggen neither draws significant jungle pressure nor follows his lane opponent can spell death for Froggen’s team. As a result, Froggen’s team requires a very specific kind of co-star – someone who can continually draw pressure in the early game while staying safe. Both of Froggen’s most successful teams have had this kind of player – Wickd on CLG.EU and Tabzz on Alliance. When Wickd fell off and began playing poorly, CLG.EU stopped being a top team. When Tabzz was replaced with Rekkles, Alliance finally had a strong utility player, but Rekkles’ own early game passivity combined with Wickd’s constant overaggression meant that Elements was never able to find the same success that Alliance did. This kind of player is crucial for Froggen to succeed, and, given the intense nature of the role, might even be a better player than Froggen himself.

Finally, Froggen’s teams require a strong shotcalling voice to direct the team. Too often, Froggen’s squads have defaulted to simply stalling until the late game, even when they have advantages. A strong shotcaller is unlikely to show a whole new side of Froggen – his game is probably going to stay the same no matter who he plays with, but they can help the team finally identify good times to act in early-mid game scenarios.

Froggen is a unique player in League of Legends, and building a team around him requires closely examining his gameplay. To best succeed, Froggen needs players that can take advantage of his strengths while covering his weaknesses. An example of a good team built around the Danish star would feature a high-farming jungler, a dominant early-game co-star in the side lanes, a supportive utility carry, and finally a strong shotcaller (in any position). Season 6 is a better time than ever for the Danish star to return to the fore of competitive LoL, as his beloved Anivia has finally returned to the battlefield. If given the right tools, Froggen will be able to return alongside her.