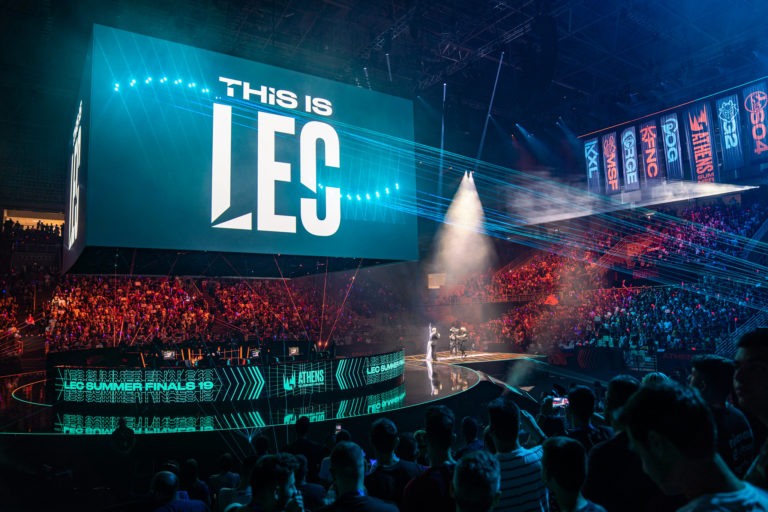 The 2020 LEC Summer Split has been an absolute typhoon. And with another super week coming up to bookend the split, the storm is sure to keep raging.

Just two games separate third place from ninth. The LEC has four tickets to Worlds this year (including the play-in tournament), so qualifying for the playoffs alone gives any team a good chance at playing on the biggest stage in professional League of Legends.

Championship Points will be granted for performance in the LEC Spring Split playoffs and the Summer Split regular season. Regional Finals will therefore no longer take place.

Here’s how the seeding for the Summer Split playoffs, sorted by total Championship Points, look going into the final week of the regular season.

In the event that multiple teams are tied in the Championship Points standings at the conclusion of the Summer Split, the team that gained the most points in the Summer Split will be considered the holder of the tiebreaker.

Again, only Summer Split performance matters in terms of who gets into the playoffs. Once the six teams are determined, then Championship Points kick in to potentially shuffle the seeding for the playoffs. LEC teams will qualify for Worlds based solely on Summer Split playoff results.

The playoffs feature a double-elimination bracket, with the No. 5 and 6 seeds starting in the losers bracket. The No. 1 seed gets to pick their opponent for the first round between the No. 3 and 4 seeded teams. Each match is a best-of-five.

Here are the potential playoff scenarios for each team in the 2020 LEC Summer Split.

MAD Lions have already clinched a playoff spot and have also escaped the mathematical possibility of starting the playoffs in the losers bracket. They can clinch a top-two seed with just one win in their last three tries, or if G2 and SK each drop at least one match.

Like MAD Lions, Rogue are guaranteed a spot in the playoffs and won’t start in the losers bracket. They also clinch a top-two seed by taking down just one of their three remaining opponents in Origen, Vitality, or MAD Lions, which could end up deciding who takes the top spot in the standings.

But if Rogue somehow go 0-3 and G2 go 3-0, then G2 would vault them into second place by virtue of a 2-0 record against Rogue in the regular split.

The LEC Summer Split regular season has been a roller coaster for most teams, to say the least—and EU’s poster boys have been no exception. It’d take a small series of miracles for G2 to secure a top-two seed. But while a winners bracket spot, let alone a playoff spot, isn’t secured, it’s much more feasible.

A 2-0 record against both Fnatic and Rogue looks nice, but it’s the 0-2 mark against Origen and the potential 0-2 against Excel and SK that could come back to bite G2 if a tiebreaker scenario comes into play. And with the majority of the league within two games of each other and no teams eliminated from contention, that could easily happen.

A win over SK tomorrow would be a boon for G2, but the match on Aug. 8 against seventh-place Misfits would go a longer way in clinching them a spot in the top six, if nothing else, because of the 2-0 record they’d secure with that win. If G2 can pick up those two wins (or any two of their final three games, the last of which is against Excel), they’re in, regardless of outside results.

Where things get dicey is if they only win one game. If Origen sweep Excel, SK, and Rogue, then they would overtake G2 given their aforementioned favorable head-to-head record. But at the end of the day, barring an 0-3 super week by G2 (if Origen, Vitality, and Misfits each drop two games, G2 would still be safe pre-tiebreakers), they need to either win two of three or win one and hope that both Origen and Vitality each drop a game.

Given that SK’s record is the same as G2’s, a lot of similar conditions are at play for them to clinch. The big difference is in their considerably tougher remaining schedule: Fnatic, G2, and Origen, all teams that have a lot to play for.

Like G2, if SK win two of their next three games, they’ll clinch at minimum a tiebreaker game unless they end up tied with Excel or Fnatic, against whom they’re 0-2 and 0-1, respectively. Even if SK’s lone loss is to Fnatic, if Fnatic also beat Excel and Schalke, then their head-to-head would vault them over SK and nullify a tiebreaker game despite equal records.

If SK fans watch their team win just one game, they better hope it’s against Fnatic since that’d even the head-to-head record, thereby leaving only one nightmare scenario—ending the split with the same record as Excel, who SK haven’t beaten in either try. It’s not much, but one nightmare scenario is better than two.

Excel and Fnatic constitute the next “tier” of teams. Being one game out of third and in a playoff spot heading into the last week of the season is a good thing in a vacuum. But the broader context of the congestion in the standings and the fact that last-place Schalke are riding a four-game win streak makes things a lot spicier. Momentum is critical in a playoff push and they have it.

Excel are also on a decent run of form. But two of their three matches are against G2 and Fnatic, both of whom, despite not looking like themselves this split, usually turn it on and look positively titanic when it matters.

Every game is important in its own way. In this order, beating Origen would push away a team that’s only a game behind them. Beating Fnatic would even their head-to-head record (and clinch a playoff spot if Excel beat Origen as well). That hypothetical Fnatic win is arguably the most important of the three because Excel doesn’t want to play G2 in the last game of the split with, potentially, a playoff spot on the line for both teams. A playoff spot almost certainly needs to have been clinched by then and the only way that it’s guaranteed pre-tiebreakers is by winning both of their games beforehand.

Fnatic have had a rough split. There are no two ways about it. The light at the end of the tunnel for them, however, is that their remaining games are against SK, Schalke and Excel. This means that, for similar reasons to the ones given for Excel, every game’s impact on Fnatic’s safety is inflated for better or worse.

Three wins out of three guarantee a playoff berth for Fnatic.

Two will do the trick unless they end up tied for the sixth spot with either G2 or Schalke (if the lone loss is against them). The conditions that would put Fnatic in a do-or-die tiebreaker scenario despite two wins are as follows: Either the loss is to SK or Excel (given that they win one other game) or if Origen win out. Misfits and Vitality could win all of their games and tie Fnatic at 9-9. But given their individual 0-2 head-to-head records against Fnatic, no tiebreaker would be played.

Fnatic also have experience on their side. They’ve competed in Worlds finals and that kind of high-intensity scenario, despite the results of said finals, will help them with the fact that there’s a proverbial gun to their head to make their own domestic playoffs.

The 6-9 teams make up the “Zero Agency” tier. Even with three wins, there are no guarantees for Misfits, Origen, and Vitality. And with the standings in the log jam they’re currently in, making sure you’ve gone 0-2 against as few teams as possible, especially those around you, is important.

For Misfits, Fnatic and G2 are the only real worries, but they’re the biggest of the “only real” worries. A tie in the standings with 7-8 Fnatic at split’s end is possible and their 0-2 head-to-head against them would mean that no tiebreaker would be forced.

G2, MAD Lions, and Vitality are a tough set of games. Misfits need to win at bare minimum two, but realistically all three, of these matches and hope that Fnatic drop the ball, so they’re going to need a small miracle.

Momentum is important heading into the last week of the regular split. But Origen have dropped four matches in a row, including a brutal loss to Vitality, with whom they’re competing for a playoff spot.

For Origen specifically, the game on Aug. 8 against SK is the one to watch out for. SK have to play a murderer’s row of opponents comprised of G2, Misfits, and Fnatic. It’s completely feasible that SK, who sit in a tie for third, drop the games against G2 and Fnatic. And if Origen can take care of business against Excel and Rogue (a tall task, but Rogue also have a little less to play for since they’ve already clinched), then beating SK and salvaging a 1-1 head-to-head record against them could end up saving their season.

Vitality might be in the most dire position of all the 6-9 teams. Unlike the other two teams with their record who could hypothetically make it into the playoffs with only one more win, if Fnatic/Excel bomb out and lose all three games, Vitality are 0-2 against both of those teams. So even in this world of minute possibilities and last-week miracles and tiebreaker scenarios, Vitality’s floor, mathematically speaking, is two wins.

Even then, obviously it’s not going to be easy. They play a scorching hot Schalke team, a desperate Misfits squad, and a dominant, methodical, first-place Rogue. Taking two of those three is certainly possible and taking down Misfits is the most important in a vacuum given their equal records. But they only play on Sunday, Aug. 9, and by then, the result probably won’t matter for either team.

Do you believe in miracles? Dead in the water two weeks ago, the LEC franchise that’s gone through by far the most turbulent 2020 proceeded to rattle off four straight wins over G2, Misfits, Excel, and Origen. Schalke sit just two games out of a playoff spot with three games to go. Their 0-8 start might have dug them too large a hole to escape, but it’s actually possible.

Schalke have five wins and need seven to have any sort of hope. Eight would be far more ideal, but seven can work because Fnatic, the team that first lost to Schalke this split, have seven wins and occupy one of the two final playoff spots along with Excel. Schalke are 1-1 against Excel, but crucially could clinch a 2-0 record against Fnatic, meaning that if the two teams end up with the same record, Schalke would leapfrog the European powerhouse.

That being said, it’d be difficult for Schalke to make the playoffs with only two wins in their last three. It’d require either Excel or Fnatic to lose all three of their games, and then neither Misfits nor Origen nor Vitality could win more than one game. And if Schalke were to lose to Vitality, it’d push their record to 0-2 against them, further complicating matters. And even if it was Excel who bombed out with all the other conditions being met, a tiebreaker would still have to be played for the sixth spot.

The bottom line is that, realistically, Schalke need to win out to make the playoffs. The amount of breathing room between seven and eight wins in the hunt for a playoff spot is a veritable chasm.