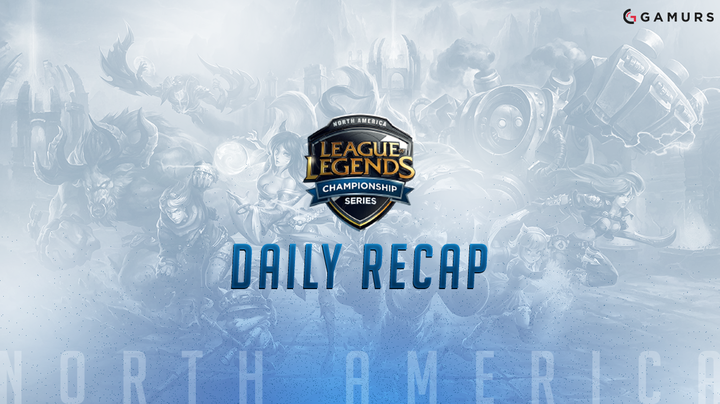 From Team SoloMid avoiding the tilt, to Cloud9 avoiding an upset from Phoenix1 here’s how Week 8 went down:

Game 1: The first match was mostly decided in the pick and ban stage. NRG countered themselves by picking Viktor into Vladmir in the mid lane and picking Gnar into Irelia in the top lane. TL essentially destroyed NRG after 20 minutes and won the game relatively easy. The best performance of the match came from TL mid laner Kim “Fenix” Jae-hoon, who 6/1/7 as Vladmir.

Game 2: The second game was about the same, including another poor draft by NRG. TL turned up the kill switch early, getting kills as early as 1:45 into the game. That trend continued and TL eventually prohibited NRG from finding any opportunity to take a lead. The best performance of the game came from TL jungler Joshua “Dardoch” Hartnett, who went 10/3/4 as Hecarim.

Game 1: TSM came out hot in the first game against NV. Despite taking a tough loss yesterday, TSM looked unphased and as strong as usual. TSM prevented NV from taking any towers Dragons or Barons – only two kills. TSM, on the other hand, grabbed 14 kills, nine towers, three Dragons and a Baron. The best performance of the match came from TSM jungler Dennis “Svenskeren” Johnsen, who went 7/0/5 as NIdalee.

Game 2: The second match was about the same for TSM, who took down NV in a 29 minute rout. The only objectives for NV came at the beginning of the game due to lane swapping well with TSM. Other than that, NV was never close to TSM. The best performance of the match came from TSM mid laner Søren “Bjergsen” Bjerg, who went 5/0/8 and had an insane 93% kill participation ratio as Karma.

Game 1: The first game was close until 28 minutes in when C9 took down two P1 members and a tower without any casualties. C9 then followed their lead and momentum and took down P1. The best performance of the match came from C9 mid laner Nicolaj “Jensen” Jensen, who went 8/1/4 as Cassiopeia.

Game 2: The second game was over for P1 about 20 minutes in. C9 ADC Zachary “Sneaky” Scuderi (10/1/9) found himself grabbing another pentakill as Jhin. It continually got worse for P1, as minutes after, Jensen found himself getting a quadra kill. C9 rode that lead and continued acing P1 until C9 destroyed their nexus.

Game 1: The first game was eventful, seeing either objectives or champions fall almost every two minutes of the game. However, EF was claiming objectives like Dragons, whereas CLG was claiming towers and inhibitors. The best performance of the match came from CLG mid laner Choi “Huhi” Jae-hyun, who went 6/2/4 as Cassiopeia.

Game 2: Huhi came out strong again during the second match, going 11/1/8 as Malzahar. CLG dominated EF throughout the match and didn’t really give EF any room to comeback into the game

What are your thoughts on Day 3, Week 8 of the NA LCS 2016 Summer Split? Who do you think will take the crown? Let us know in the comments below or on our Twitter – @GAMURScom.