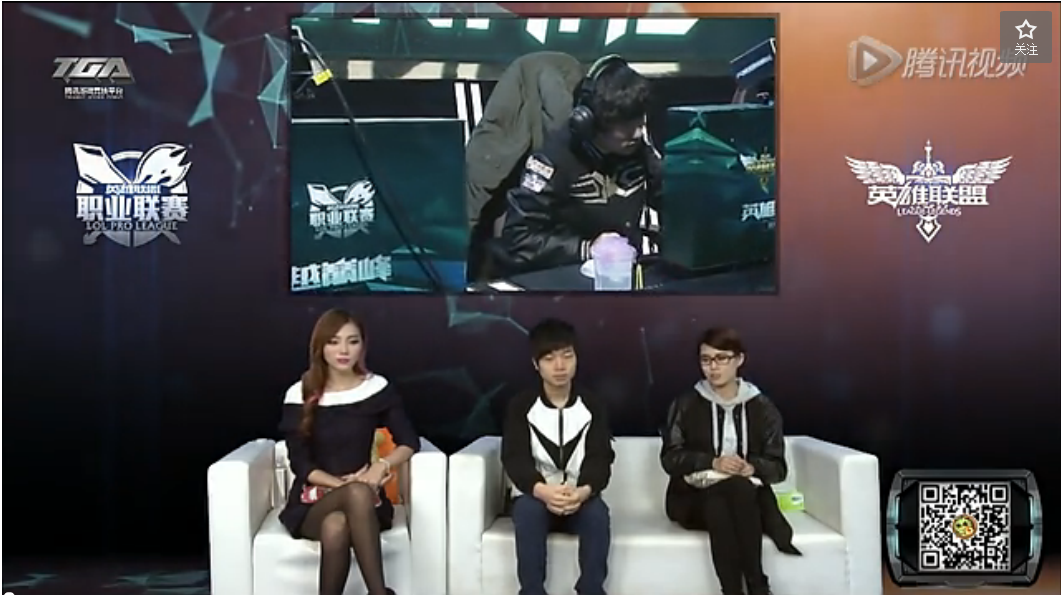 GodLike: I feel EDG is stronger coming into this game. I think Loli is starting for EDG…ah they replaced Clearlove. I think they switched Clearlove for Loli+Meiko to give the new guys have some competitive experience.

Hostess 1: how do you guys feel about Loli?

GodLike: I know him from Solo Q. He used to play ADC in ranked games, but then switched to jungler. Last year he played for EDG as their top laner, but he didn’t play very well back then. He plays almost every champion in solo Q. Three champions he will use most likely: Lee, Rek’sai, and Jarvan. I don’t think Snake will ban his Lee Sin because Clearlove is much stronger than him on that champion.

GodLike: Lulu ban against EDG, targeted ban for one of the EDG’s favourite pick.

GodLike: Yes but long-range mages are not used often nowadays. They can focus on picking Ahri for Baka. Lissandra is becoming more familiar to the teams, therefore not as contested. Kassadin and Veigar picks are in their pre-nerfed version, but next week a nerf to both of these champions since we will be on the latest patch for LPL. Kennen will also become strong next patch, especially after his two consecutive buffs plus a Gnar nerf.

GodLike: Riven confident pick from PawN! Riven counters Kassadin very hard; she has the potential to 1-shot Kassadin at level 6 if Kass doesn’t play carefully. Snake is looking to scale with Lucian in the bot lane for early power. EDG’s comp. focus on mid-game teamfight with Riven/Veigar/Kennen, almost invincible in team fights. If Snake can survive mid game, they can win easily late game.

GodLike: There are more and more young players in Challenger. Loli is about 17-18 years old. Deft should be MVP with his best performance in team fights with good flanks. Snake rushed early game skirmishes too much thinking they can initiate with Jarvan and Leona, but there was no follow up. They should have waited for late game for the easy win.

Hostess 2: Another target ban for Baka. I feel like Baka is being exploited a lot. They have to pick Lulu for Baka. It’s possible they are playing another protect the ADC comp. with 4 people.

GodLike: Looks like Clearlove is the coach for EDG today. They are going with Kryst4l on Kog’maw again.

Hostess 2: Nunu jungle was really popular in China before. But after Tristana rework for some reason Nunu fell off.

GodLike: Possible Hecarim pick for Flandre. Looks like they are doing the 4 support 1 ADC formation. I noticed EDG has a bit too much AP damage focus. They are also picking a hard engage comp. against Snake’s supportive comp. Snake used to be top/bot heavy, but now it’s just protect Kryst4l. I guess they are just focusing on whoever is performing better at the current time.

Hostess 1: PawN, I guess his name is based on his appearance. (Note: PawN sounds like Pàng ?, which means fat)

GodLike: Two ADCs on each team both carry a game. Snake’s Draven and Kog’maw looks really good. Snake’s recent poor performance could be attributed to other teams studying them harder, but Snake didn’t pay too much attention to that fact and they weren’t as prepared initially.

GodLike: ADC/Scaling comps. are becoming popular because tier 2 towers are too hard to take, so teams that play to scale has the advantage.

GodLike: I don’t think SHRC will change their rosters too much. Last week they played LPL and right after they played Demacia cup. Because they only get a day at most for break, they couldn’t practice too many different strategies and would likely play with only comfort strategies.

Hostess 2: You guys played a lot of scrims right?

GodLike: Ya we should get better results with Namei. A lot of pressure on him because only top 8 gets to playoffs, and we only have two weeks left.

Hostess 1: Let’s look at the ADC for SHRC. Wow 4 graves pick in a row for Wei.

GodLike: In the recent patch Graves is really strong due to his AD damage burst. Kalista is strong in Solo Q but hard to win. Her attack damage is too low against tanks and have to rely on her rend. OMG is likely to target ban Cola and Corn.

GodLike: OMG bans Azir because Cool can’t play that champion very well. Bans Kassadin because SHRC is usually good using that champion. Neither teams will ban ADCs because they are not the priority. Possible Insec picks jungle Zed. He always wanted to play Zed jungle, spammed him a lot in Solo Q but his coach won’t let him play.  I don’t think he will continue to play Hecarim jungle though, it’s mostly saved for Cola.

Hostess 2: You should cast every SHRC match from now on! You can guess all of their comps. with your eyes closed.

GodLike: Possible Xerath pick for SHRC or Leblanc. I don’t think Corn will play Leblanc. Ah Orianna pick! Makes sense because Corn thinks Orianna became stronger now that every other mid laners got nerfed. He played him a lot in Solo Q. Not too comfortable to pick Viktor though.

GodLike: Ah Orianna didn’t play too well. Rengar started with 3:1 but failed a couple of ganks. But Insec looks strong this today.

Hostess 1: Let’s see if SHRC will ban out Kalista.

GodLike: Why SHRC ban their own Kalista? I don’t think SHRC will pick Kalista, they are sticking with Grave’s burst. Ahhh they picked Kalista.

Hostess 2: If SHRC picks Uzi’s previous champion, is he going to get angry?

GodLike: Nah he is going to pick Graves instead. With the first pick Nami, I think they are reversing the comp. Uzi could also pick Lucian. Lucian became stronger now that other ADC received a bit of nerf. Lol look at Uzi picking Graves, he looks so happy. Real chance Insec picks Zed jungle here though.

Hostess 2: He picks Nidalee. I think SHRC knows you are casting so they are messing with your predictions on purpose.

GodLike: Namei said in scrims, when Insec plays Nidalee she doesn’t have a “Q” ability because Insec cannot land a single spear. Gnar vs. Rumble. Gnar is even against Rumble in lane, but with a teammate Gnar is better at catch Rumble than the other way around. OMG is not going to lane swap though. They want to show SHRC’s bot lane how to play, but they might get too cocky and it would funny if they get rekt.

Hostess 2: I think each promo videos should describe the story of the player. For Clearlove, the storyline is “Your time is over.”

GodLike: Turning point for OMG is when they destroyed SHRC in the Baron fight. Very quick games. Nothing wrong with their comp. but when they lane swapped, their top laner got caught too many times. Otherwise they would have done well with Rumble mid. I think the MVP here is Cloud.