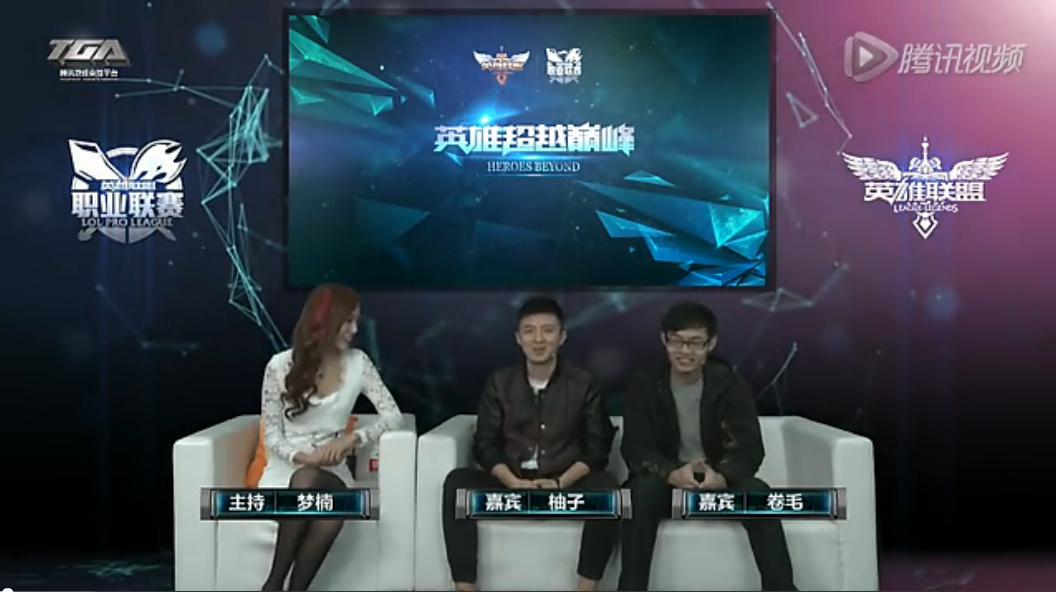 Hostess: We have SHRC vs. IG today. Really important match for both teams. If SHRC wins, they get 3 points today maintain their playoff hopes. If IG wins, they can challenge EDG.

Pomelo: Fzzf and I just met IG’s coach outside of the studios today.

Fzzf: Fans always ask if IG is sandbagging. But they played too many games, it’s impossible to sandbag at this point. Everyone is playing seriously. If they sandbag, then it will negatively affect their morale if they lose against the top 4 teams.

Pomelo: When I was playing against LGD last year for seeding, we thought about sandbagging to get a better semi-finals match-up. But we chose not to because 1) fans could tell and it will make us look bad 2) our team morale would be negatively affected.

Fzzf: Insec still unable to play means SHRC will have a weaker early game, since Insec makes most of the plays. But we will see how the new jungler performs. Not much to say about SHRC, they are not strong at the moment.

Fzzf: I think IG will 2-0 SHRC. Zztai’s change to top lane wasn’t good initially, but his champion pool has become wider. The mid and top lanes share a similar champion pool this meta, which helps him greatly. Besides, he is young and talented; he will improve over time.

Fzzf: Sejunai is super strong right now due to pre-nerf Cinderhulk (in LPL). The mid lane pick in this meta usually falls to the 4th-5th pick; jungler and top lane 1st pick. Gragas is also popular in the jungle because he plays similar to Sejunai: very easy clear without any counters. SHRC picks J4 for jungle. J4’s damage is a bit inconsistent. He has to rely on landing E-Q.

Fzzf: Kennen support is viable in this meta. He can support in lane, and in team fight he has AOE CC.

Pomelo: Namei locks in that Vayne pick with confidence! He is saying to Fzzf, “I will show you how to do damage!”

Fzzf: I don’t like his Vayne pick. Her burst damage isn’t very useful against all the tanky, CC heavy champions this meta. Also, her laning ability is weak. Vayne has to dodge too many abilities in this meta; even Uzi doesn’t like to play Vayne — and he loves Vayne.

Fzzf: Rookie’s Azir will have a hard time against Vlad in lane. He needs jungle help. Maybe Xerath would have been a better pick because of his longer range. I think SHRC has a weaker comp. this game. SHRC takes too long to scale with Vayne and Vladimir.

Fzzf: There are two ways to play support Kennen: 1) Go in with “E” and ult 2) Save ult for when enemies dive his ADC

Fzzf: Vayne isn’t a good pick in this meta at all.

Pomelo: This meta both the jungler and top lane position build tanky. Very difficult for ADC to carry unless 4-protect-1 comp.

Fzzf: Honestly Vlad is strong against tank because of his ult and low cooldown on the rest of his skills. That is why Vlad is a popular pick this meta. Jinx would have been better suited for the comp. She has longer range than Vayne as well. Outside of P/B, SHRC played a great early game, but in team fights they had no answer for Rookie and his tanky teammates.

Fzzf: The popular comp. this meta is 3-protect-2: everyone protects mid and ADC. Mid burst damage and ADC consistent damage.

Pomelo: We were trolling Namei in the studio after the game about why he pick Vayne and not Jinx. He said, “Jinx your ****” Lol.

Fzzf: I thought he played well in the early game. He just couldn’t do much in team fights.

Fzzf: Gragas first pick for SHRC. He is on par with Sejunai at the moment. IG picks Udyr. I have never seen Kakao play Udyr in Chinese Solo Queue though. Maybe he played in Korea.

Pomelo: What support is good against Thresh?

Fzzf: Morgana. If they pick Annie, she pairs well with Kalista. If Thresh gets jungler help, Annie is easy picking. But Annie is hard to play against in lane otherwise. Thresh is very strong this meta; the best you can do against him is go 50-50 in lane.

Fzzf: I don’t like Jinx or Kog’maw in SHRC’s comp. There are very little protection for them. When I was playing in EDG, Namei plays whatever I tell him. When I roam, I just tell him beforehand, and he listens.

Hostess: Lol you call Namei your son. Of course he will listen.

Pomelo: Isn’t Weixiao your other son? He listens to you as well.

Fzzf: IG gave SHRC a chance by fighting 4v5. They would have won easily otherwise.

Hostess: No change to the standings after the two teams split 1-1.

Fzzf: I am not sure why IG fought 4v5 two times, especially the time with Gragas in mid when Kid wasn’t there. I think MVP goes to Thresh. He landed so many good hooks.

Pomelo: I feel like both teams choked in the later parts of the game. They weren’t sure what to do or how to fight.

Hostess: EDG vs. VG, the 1st place team against the 4th place team. For both of these teams, points aren’t really important anymore.

Pomelo: I want you to be honest with me Fzzf. I had encounters with Clearlove before. How is his temper?

Fzzf: Hmm, actually his temper right now is ok. Before he had emotional issues, but now he is a veteran and he became mature. He knows that his job is to lead his team, and he shouldn’t throw fits with his teammates.

Fzzf: About EDG’s new base, they are trying to make it more of an office than a home environment. Also a foundation for future growth.

Pomelo: Can you leak some of EDG’s recently practiced strategies?

Fzzf: They are practicing everything. They are a world class team. If they want to win S5 world championship, they must be diverse in strategies and cannot be exploited by other teams.

Fzzf: Koro1 can go even against Gogoing and other elite top laners in China. His tremendous growth comes from his own desire to improve and also a ton of pressure from Clearlove. Clearlove helps him as well though.

Fzzf: VG didn’t expect Urgot from EDG. I don’t think PawN will take Zed this game. His team won’t let him. VG has to pick a bot lane that can survive the early game. They can either lane swap and starve their Hecarim, or let their bot lane tough it out.

Fzzf: Mid Morgana for PawN. Not a good match-up for him against Lulu, but good against VG’s comp. overall. EDG’s team comp. leans toward tankiness. VG has the Sivir movespeed advantage. They can hard engage with it.

Pomelo: Urgot isn’t scared of hard engages though. His ultimate can drastically raise his resistances.

Fzzf: EDG should have lost this one. But Clearlove got mega fed from one good team fight, and he snowballed incredibility hard afterwards.

Hostess: I guess Clearlove grew from a small pig to a big pig!

Fzzf: EDG said after the game that they picked Morgana because they were worried that PawN will get ganked if he was on another champion. They said Morgana would have a huge impact in team fights, but we didn’t see it.

Fzzf: I don’t think Clearlove needs to pick jungle early. But EDG takes Sejuani and Morgana. Morgana won’t be mid this game for EDG though. Gnar is still a good pick right now for VG.

Fzzf: Many teams in LPL can play Karthus. Usually he is banned against teams known to play Karthus. EDG picks Nami and Karthus to win lanes. Nami is the best lane bully.

Pomelo: Ya usually that lane has to be camped by the enemy jungler.

Pomelo: No I think people that go “W” first are retards because I land all my “Q”s and destroy people in lane.

Fzzf: VG didn’t play with Gnar’s rage bar very well. They should have fought sooner with Gnar’s full rage bar when sieging. I am not sure what they were doing at times, picking bad team fights without Gnar ultimate.

Fzzf: VG played well these two games though. They gave EDG a scare at times. VG has been steadily improving to become a strong team in LPL.

Follow me @stevenyuzk for latest updates! You can also find me on LiquidLegends!