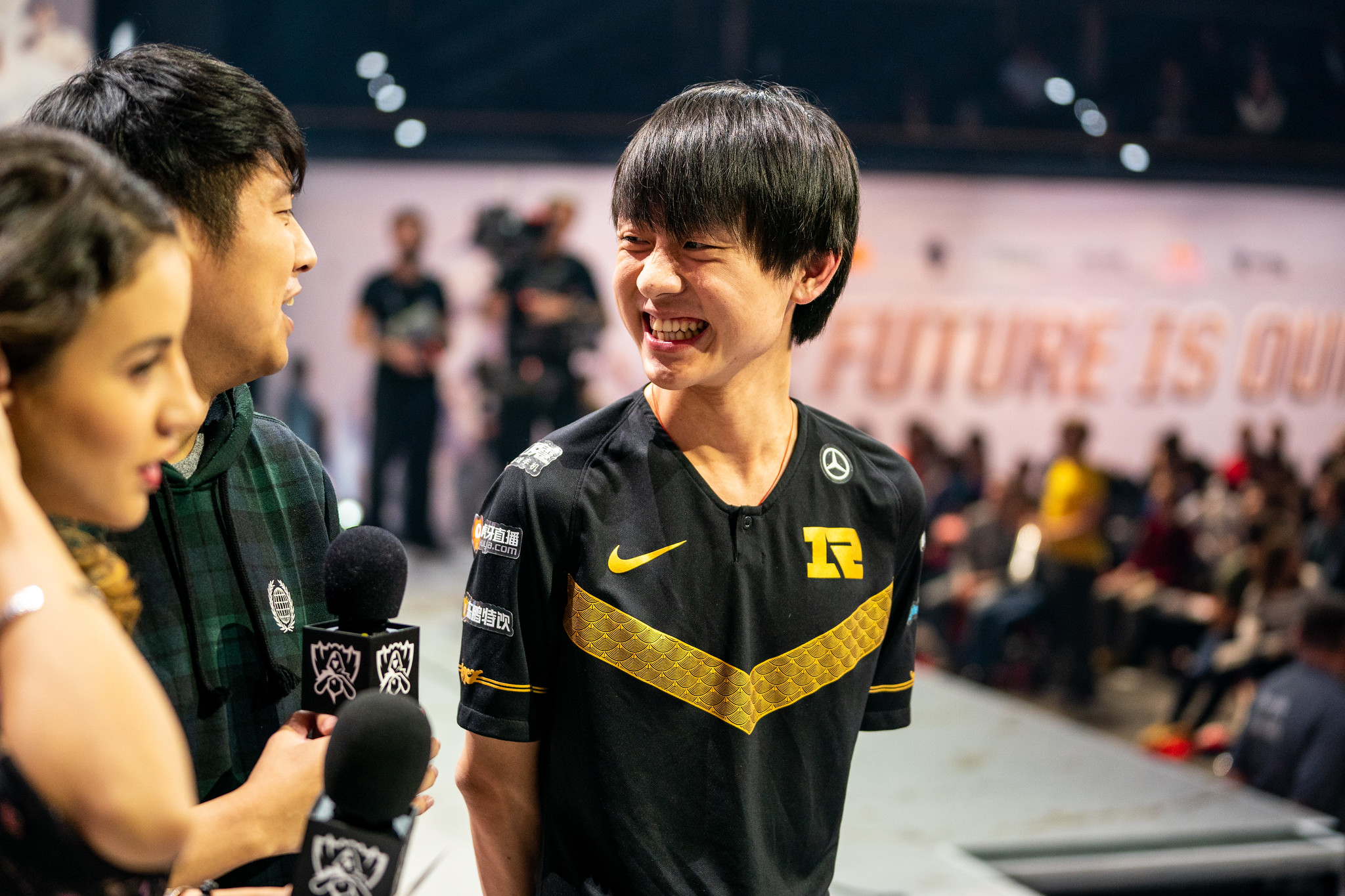 Free agent signings, academy graduates, and coaches throughout arguably the world’s deepest region will get their first chance to see how their squads mesh in the Demacia Cup, a relatively low-stakes preseason tournament for the LPL.

Whether FunPlus Phoenix’s humbling of G2 Esports at the 2019 World Championships did in fact signal the start of a new region’s reign atop the League of Legends competitive scene remains to be seen. But after a frantic free-agency period that included a head-spinning amount of roster swaps, the Demacia Cup will take up more of the spotlight than in previous years as the 2020 season approaches.

If the LPL was a deck of cards comprised of individual players, then the last month of free agency could be described as 52-card pickup.

FPX did not mess with their winning formula, and they will be trotting out their academy roster for this tournament.LNG Esports poached a new mid laner and jungler, Top Esports look even more deadly after their heartbreaking exit from the regional qualifiers, Uzi has a world-class ADC to compete for playing time with at RNG, and 2018 world champion JackeyLove still doesn’t have a team after leaving Invictus Gaming, despite still being in the conversation of best AD Carry in the region and world.

The tournament itself consists of all 16 LPL teams as well as four of the nine independent (non-academy) teams in the LDL, the Chinese circuit’s secondary league, split into four groups of five teams each. FPX caster Opal has blessed Western viewers with an English stream that will be rolling by the time the first matches start up today at 9pm CT. Whether you’re a regular late-night LPL watcher, or you just want to see the pros play on this roller coaster of a preseason patch, there are reasons for everyone to tune in this week.

The beginning of the Top Esports Worlds warpath

Top Esports has a chip on their shoulder. The team that was one win away from taking iG’s spot in Worlds is the only LPL heavyweight starting what is expected to be their 2020 core five at the Demacia Cup. Bai “369” Jia-Hao, Zhuo “Knight9” Ding, and Zhang “QiuQiu” Ming all return for TES in their respective roles. Despite losing their ADC in Lee “LokeN” Dong-wook as well as one of the region’s best junglers in Xiong “Xx” Yu-Long to LNG Esports, they replaced him with a former member of the Flash Wolves dynasty, RNG’s Hung “Karsa” Hao-Hsuan. While they are both elite junglers on paper, Karsa is an upgrade. Not only did he rank higher in both kill participation and KDA during the Summer Split, but he also has invaluable Worlds experience that will only benefit TES should they take that elusive leap on the world stage.

The only unproven on an otherwise loaded roster for TES is newly-minted academy graduate Ying “Photic” Qi-Shen. His Kai’sa was lethal in the LDL in 2019, but the ADC has yet to play a single game at the highest level. He and the rest of his team begin Group B action at 9pm CT tomorrow, highlighted by their bout against EDward Gaming on Sunday at 6am CT, who are without star jungler Clearlove (now EDG’s coach) and ADC Hu “iBoy” Xian-Zhao.

Karsa isn’t the only former Flash Wolf that has re-emerged in the LMS diaspora. Recent RNG signee Lu “Betty” Yu-Hung will get his first chance to prove he can compete with Uzi at ADC. The LPL giants will bring back and start Xie “Langx” Zhen-Ying, Li “Xiaohu” Yuan-Hao, and Shi “Ming” Sen-Ming, a roster unchanged from a disappointing Worlds exit a little over a month ago aside from ADC and jungle.

Filling the latter role is another player fresh from the LDL’s Young Miracles, Li “xiaolongbao” Xiao-Long, who had a solid LDL Summer Split and brings an extremely diverse champion pool to his new team. He is slated to start over academy callup Wang “S1xu” Kang-Can. Xiaolongbao will face his former team tomorrow morning at 4am CT.

Vici Gaming had a rough 2019, winning just four of their 30 matches during the year. They finished dead last in the Spring Split and second-to-last in the Summer Split, with only a less terrible map differential saving them from back-to-back finishes in the cellar. Something had to change at a fundamental level, and so far Vici have delivered in a big way.

Former SKT—yes, that SKT—head coach Kim “kkOma” Jeong-gyun has taken over as the team’s new head coach for 2020. He oversaw the greatest dynasty in the history of competitive League, a dynasty that started in 2013 when the first Faker-led SKT team put the world on notice in a steamrolling performance at Worlds.

The support on that team was Lee “PoohManDu” Jeong-hyeon, and this past offseason he decided to reunite with kkOma at Vici as an assistant coach, a role he served under kkOma before at SKT in 2016 and 2018. While great coaching does not a Worlds contender make, this is a fantastic start for a Vici team that needs drastic change to compete in the LPL in 2020.

Vici lost bot lane duo Ding “Puff” Wang and Su “Southwind” Zhi-Lin to the iG academy last week, who, despite their team’s results, were solid enough. Replacing Puff in the bot lane is former EDG ADC iBoy Lee “Chieftain” Jae-yub, who saw success with Bilibili Gaming’s academy but has not found a foothold in the LPL yet. Li “Aix” Yang also returns in the jungle for Vici, but this will be a battle to watch, especially if Chieftain can impress the new coaching staff at the Demacia Cup.

The overhauled Vici has their first contest at 10pm CT against FPX, which would be infinitely more terrifying if not for the fact that the reigning world champs will be starting academy players this tournament.