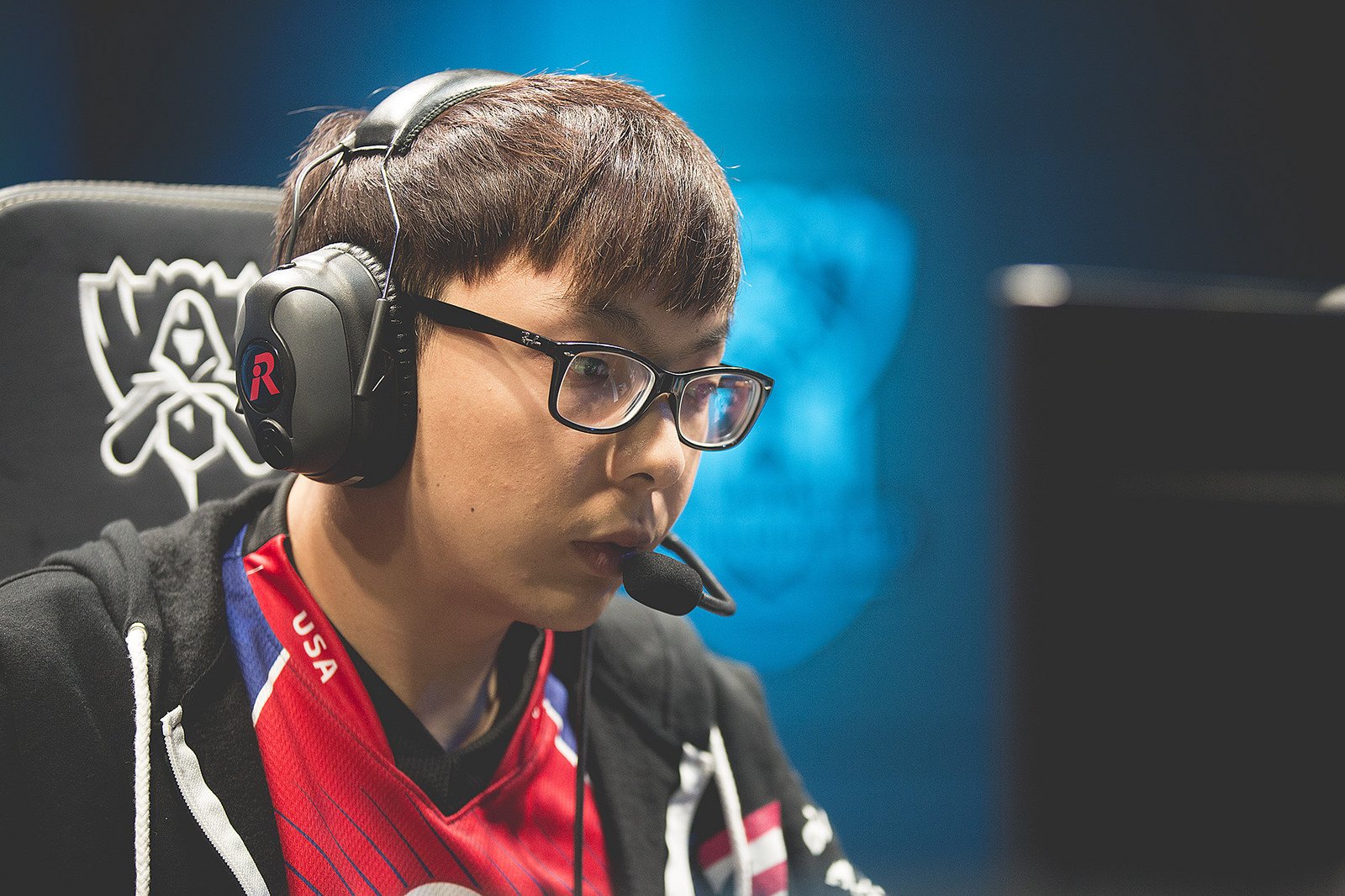 The news that Riot Games are considering implementing a five ban per team system has caused many to become concerned about the impact on the professional scene being for players with shallow champion pools to be completely exploited and those with very deep champion pools to immediately become the most valuable in the game, to an unreasonable degree – with the implication being that this would further extend the gap between the elite Koreans and the West.

In reality, what we currently know about how teams approach banning and the psychology which informs who and what they ban suggests this would not be the case. As such, here are five reasons not to fall prey to the five ban hysteria.

“After the pre-season, we’ll look into potentially changing to 10 bans in draft games. We’re just starting to gather feedback on that from both regular players and pros. We know there’s some definite interest in more bans. There are some potential issues we’d want to make sure we were able to address though before adding extra bans, including:

* We feel champ select’s too long already. We’d want to find ways to not increase its duration further as a result (e.g. multiple people from the same team banning at the same time?).

* We want to ensure that increased ability to target ban a position doesn’t create issues with how many champions a player needs to be able to play well (extreme scenario, 11 champs for one position – is that appropriate?)

* Adding four more bans increases the number of champions needed to play ranked by four. Is that a problem? A benefit?”

1. The current ban system allows teams to force an opponent on their fourth best champion.

When one thinks of a player with a shallow champion pool, it is rare that the play four champions to a degree which would make them dangerous or particularly competent in a professional game. Yet, how often are three bans focused from one team to that player’s role in the competitive scene? Almost never, to the degree it can essentially be banked against when planning a pick-and-ban phase.

Team Dignitas banning out three Junglers in the wake of Amazing’s ill-thought out AMA comment about his champion pool, forcing him onto a Volibear which could not impact the game positively, stands as a rare instance of full focus being placed upon one player at one role. Part of the reason this story remains so infamous is that this approach has simply not become anywhere close to a standard component of the pick-ban meta-game.

Just as teams right now do not force one specific player to play his fourth best champion, or fifth if the banning team were on blue and had first pick, so it is highly unlikely changes to the number of bans and picking system will result in teams focusing all of their own bans upon a single player. Thus, there will be no players being forced onto their sixth best or 11th best champions. To imagine otherwise is to ignore practically all evolution of the pick-ban meta-game and the basic psychology informing how teams ban against their opponents.

With the current ban system, it would also have been possible for both teams to focus ban the same position and force someone onto their seventh best champion, or eighth if blue side picked that role as well. That is not even a consideration necessary for competitive teams.

2. Teams ban to take away strength, not force weakness

The meta-game of pick-ban is typically to reduce the strength of the opposing team, by and large. This means targeting general power picks that will help the opponent, by virtue of how strong they are in the current meta-game or based on what the team banning wishes to potentially play. Aside from that approach, bans are mainly used on specific signature champions which might not be unusually strong within the meta-game but become strong relative to how good or comfortable the opposing player is on other picks in his pool. It’s less that a team is forcing him onto a weak pick directly as much as they are taking away what is a strength due to comfort or history with the champion.

Even with the latter point made, it is not uncommon for teams to allow through a signature champion of the opponent if it is felt that it is not strong enough in the current meta, as often seen with Froggen’s Anivia. By allowing it through the ban phase, the team in question can instead take more power picks away from the player and his team.

It also needs to be recognised that bans can be used to deny specific compositions, with the juggermaw being a famous instance, as opposed to simply remove strong champions or champions fitting for the player who will be piloting them. By denying certain options, the opposing team can sometimes be forced onto a less optimal composition, in terms of emphasising the strengths of the key champions within it. Likewise for a lane like botlane, where it is a matter of considering two champions playing there as opposed to just the ADC.

The only reasonable case of a specific player being fully banned out, without that necessarily encompassing just power picks, are the rare instances where the opposing team has a star who is so key to their win condition and only has three or four champions in his pool on which he could reasonably deliver victory to them with any consistency.

3. Most teams have more than one dangerous player

The prime example of the scenario outlined at the end of the last section is FORG1VEN in the EU LCS Spring playoffs, where it is remembered that he essentially had shown strength on a champion pool of three (Lucian, Graves and Caitlyn). He was the league MVP and practically unstoppable when give one of those picks, with the team playing around him and charging to a 15:3 regular split record. As such, it is oft repeated that teams simply banned out three champions from him.

In fact, that scenario played out in only a single game and the outcome of that game was an SK win with FORG1VEN on Vayne. For most of the playoffs, SK’s opponents – UoL and H2k, banned two ADCs and it’s not even the case that the opponent always first-picked an ADC.

The reason teams rarely focused all three of their bans onto FORG1VEN and why it was not even the sole ban strategy of the two Bo5 series was that SK had another star player who was a primary threat in Svenskeren. As such, the philosophy was primarily to take two ADCs from FORG1VEN and then a Jungle champion from Svenskeren. Tweaking the champions within that formula proved to the blueprint for both opponents to win the series and even then only in five full games each time, hardly an iron clad case for the approach’s degree of success.

A current player famously cited as having a weak or shallow champion pool is HuHi from CLG. Consider that teams who focus all of their bans upon him leave up powerful picks for Darshan and Aphromoo. What’s more, they allow Xmithie to potentially get whatever he wants in scenarios where CLG first-pick. Teams do not right now force HuHi to play his fourth or fifth best champion with the current system, so is it reasonable to consider he will be focused under the new ban system?

For strong teams, focus banning one player opens too much up for the rest of the team.  Focus KurO and you will quickly find that Smeb, peanut and GorillA have power picks that will likely destroy you regardless of how their mid lane does. Are there even teams who are in any way relevant internationally who are weak enough to have a single player who can be focused, without it destroying the banning team when the opponents put power picks onto even players considered weak?

4. Focus banning a single position is a gamble for the team banning too

Not only does focus banning out a single player gamble that he does not have pocket picks he is capable of making work, weighed against giving up any opportunity to deny power picks from other roles, but it also is a gamble on the part of the team in question. If the banning team does not have first pick, then their own player will sometimes need to play five champions if his team bans three.

That is one of the reasons that at S4 Worlds teams practically never banned against SSW’s DanDy, who was one of the players in the tournament ahead of his opposing position by the most distance. To ban DanDy ran the risk that Samsung themselves might ban the Jungle and thus his deep champion pool suddenly invalidated your own. Perhaps you intended to simply remove one or two key picks from him? Well if SSW responds with a couple of extra bans themselves, now he might be good enough to survive on a champion that is left over and your jungler might be completely lost.

Even with first pick, banning all three champions for one position would outright signal to the opponent both that you will likely first-pick a champion for that role and thus prepare them for the direction your draft is heading in. The follow-on thought will be that since you have focused one position, the opposing team can now begin to construct a very powerful and effective composition based around all the power picks left up, knowing that even if you pick some of them that the second best power pick will often be available for key roles.

5. A staggered ban phase is most likely

Most bizarre in the discussions which have thus-far taken place or observations noted by those considering the increase of bans to five is that many seem to speak as if it will simply be an extension of the current system, with teams banning five champions each before one is picked. Even in such a scenario, all of the above reasons remain valid and vital to teams considering what and how to ban. Yet, one must also consider that the ban may become staggered, as is the case in Dota2

So Dota has less bans before picks than LoL does. Even if LoL employed three at the beginning, in keeping with the current system, and then staggered the last two mid-way through the draft, it would not directly allow five bans to be focused onto one player, as is being suggested in some what hysterical tones. The positive of a staggered system is that it forces teams to initially reveal something about their draft, but also allows them to conceal something about who they will ban later. The draft becomes more a chess game and more reactive than the current LoL approach.

Dota2 is a game with a massive amount of diversity in how many heroes can be used and in which roles, but even so they adhere to a meta-game regarding denial of specific heroes and compositions, as opposed to piling all of one’s bans onto one player.

The world will not end overnight

The simplest way to off-set the alarmist exclamations of those worried an increase in bans will destroy competitive LoL, by virtue of making certain professional players non-factors in games, is to ask: why would adding two more bans, at any point in the draft, completely remove all current meta-game pick-ban approach theory, especially regarding power pick denial and selecting for composition?

No reasons that would suggest a radical overhaul have thusfar been put forwards, so fears seem simply to be projections of LoL-centric minds into the unknown of a world with more bans. HuHi will not be playing his sixth or 11th best champions in LCS matches. The champion select sky is not falling.