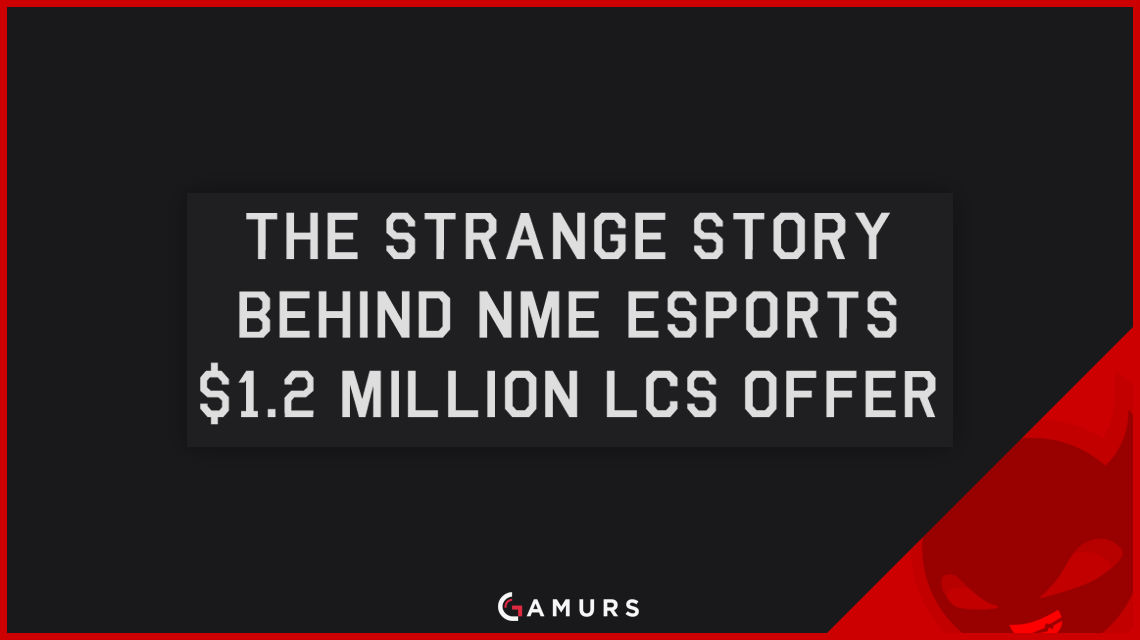 Many League of Legends fans were perplexed when they found out that Enemy eSports (often styled as NME eSports) declined an offer of $1.2 million shortly after entering the North American League Championship Series (LCS). Few saw such a value for the team, especially considering one could easily build their own League of Legends team for such a price. Even fewer failed to understand why the owners would not simply take the outrageous offer and run.

Most disregarded the statement, which was made by Dan “Clerkie” Clerke and published by the now defunct Esports Go publication, as hyperbole to either hype the team or generate interest in a legitimate sale. At the time, the NME roster was preparing to compete in the North American LCS Summer Season 2015 and consisted of:

It was eventually revealed to the public who the offer was supposedly made by, but, thanks to Chris Badawi’s AMA (Ask Me Anything) on the League of Legends subreddit, we now know the context of the offer.

Badawi also claims to have “inadvertently, accidentally, randomly and single-handedly set the going price of LCS teams over a year ago” as a result of the offer.

The story goes something like this: while building the Misfits roster that would eventually become known as the Renegades organization, Badawi became aware of someone who was signing players from the challenger ladder, paying them unprecedentedly high salaries to have them join his team. Reaching out to this mysterious owner, he discovered that Martin Shkreli was behind the signings.

Now known as one of the most despised men in America, at the time, Shkreli was merely another faceless billionaire, making his fortune through hedge fund management, biotechnologies and pharmaceuticals.

Strangely, despite putting a large amount of money in his newly created challenger team, the soon to be named Odyssey eSports, Badawi claims that Shkreli had no knowledge of the existence of the LCS before reaching out to him. Once he was aware of it, however, he had to be a part of it.

Interested in picking up a legitimate team and knowing that Badawi had connections to the esports community, he asked him to pursue such an endeavor for him. Knowing the owners of NME, Badawi quickly contacted them and asked if they would be interested in selling their LCS spot. Declining, largely due to the recent sale of Curse Academy only being 400k, Badawi decided to take a different approach.

Knowing how much wealth Shkreli had at his disposal, he chose to throw out a random number that he believed NME could not refuse and the Shkreli was able to pay. He ended up asking NME if $1.2 million would be enough for them to part with their team.

Although declining this offer, an NME owner quickly went to Esports Go and claimed this to be a hard offer that he nobly declined.

During the Summer Split, NME only managed to finish with a record of 4-14, placing them in second-to-last and forcing them into the Spring 2016 Relegation/Promotion tournament. There, they lost 3-0 to Team Coast and were removed from the LCS. They subsequently rebuilt their roster for the Challenger Series, but finished in last place and inevitably sold their spot to Cloud9 in order for them to form a challenger team.

The most interesting part of the story, however, was not only Badawi’s outrageous offer, but the consequence that it had on the scene as a whole. This news of a $1.2 million offer supposedly set the bar for the future of those who wished to pursue the purchase of LCS squads. Badawi claims that it was used as a benchmark of the sale of Team8, Gravity and Coast the following split.

This led to the arrival of Immortals, owned by a team of investors, Echo Fox, owned by former NBA star, Rick Fox, and NRG eSports, owned by two co-owners of the NBA’s Sacramento Kings.

The $1.2 million “offer” completely changed the landscape of the LCS and what it takes to own a professional League of Legends team. You can read Badawi’s account here, and browse through the rest of his AMA to hear several other interesting stories.

What do you think about this League of Legends story? Surely an interesting piece of history revealed through coincidence. Let us know in the comments below or tweet us @GAMURScom.