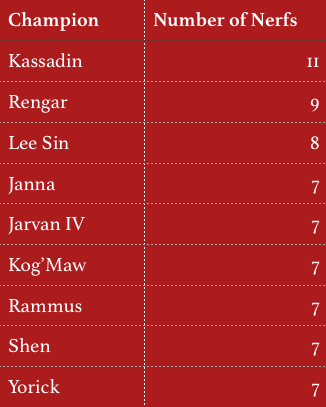 Note: This article contains only the data on all patches after and including the Yorick patch on June 22, 2011. This is when some believe balancing in League became similar to what it is today, although an explanation and argument why could take up a whole other article. Basically, mid 2011 is when patches became less frequent and the ADC-support meta took hold.

Also, I’ve only included the number of buffs and nerfs, not how big they were. Although this part could be a bit subjective, I only counted changes if: 1. They were meant as buffs or nerfs by Riot; 2. They were obviously big buffs or nerfs, even without intent, or 3. They were fairly major bug fixes. If a champion was reworked or had a large neutral change made to it, I counted the change as a “tweak”. Nerfplz.com was very helpful with this.

Before we get too far, here are the charts that most people came for (remember, this is only in “modern” League): 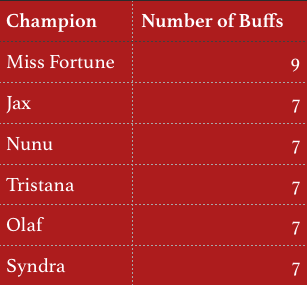 On the other hand, the only champions with zero nerfs are Draven, Karma, Lissandra, Malphite, Poppy, Quinn, Trundle, Varus and Vel’Koz, while the only ones with zero buffs are Aatrox, Braum, Darius, Jinx, Karthus, Lucian, Poppy and Rek’Sai (Lucian’s 3.12 and 4.12 changes was meant as a “tweaks”). If we change our metric to “percentage of patches nerfed/buffed”, Syndra and Rengar become the 3rd and 4th most buffed, but the rest of that leaderboard is dominated by newer champions.

All of these lists are interesting to look at, and there are certainly some surprises in the “buffed” column. However, I’m more interested in the general question; is there a pattern to which champions Riot likes to change the most? I took a look at all 391 buffs, 385 nerfs, and 98 tweaks since the Yorick patch to find out.

First, let’s look at role (PatchChange% means the percentage of patches that an average champion in a role was changed in, while Score is simply Buffs minus Nerfs):

These are Riot‘s designations, so this is how they feel about the different champions. Translation: the balance team loves changing assassins and supports (mostly nerfs), rarely nerfs mages, and doesn’t make changes to fighters very often. Some of the lack of changes to fighters can be attributed to a disdain for champs like Poppy, Irelia, and Aatrox, who are nerfed once or twice because of certain toxic gameplay elements.

We can go even deeper, though: which exact elements of assassins and supports make Riot want to change them so often? I tested 13 attributes of champions for significance (the math of how I did this is on Page 2), and I identified 6 characteristics which significantly affect balancing of modern League of Legends.

So you can stop worrying about Master Yi getting nerfed more than usual, I guess. Meanwhile, here are the 6 major factors that affect the frequency and type of balance in League of Legends, ranked from least important to most important:

It’s not surprising that older champions are changed more, while younger champions are released as very strong and then nerfed. However, the difference between the change rate of the very old champions and the middle-age champions is small but significant.

Effect: Champions with a shield get changed more often

This was a surprise. I almost didn’t include it, but possessing a shield turned out to have a small effect on how often a champion was changed. It looks like shield champions get nerfed more too, but it turns out that these shield champions have other elements that are more likely to get them nerfed. The difference in change rate holds up, though.

Effect: Manaless champions are more likely to be nerfed than buffed

This isn’t shocking, but it is somewhat startling to see how big the difference was. 74 nerfs in 1300 patches is a very high number.

This was the most influential single effect I saw in this project, and it all has to do with the healers’ massive “tweak” number. This is basically the balance team saying “We don’t know what to do with Soraka/Sona/Nidalee/Janna/Zilean”. (Yes, Zilean’s ult is a heal). Sona and Soraka were tweaked four times each, while the average champion was tweaked less than once.

Effect: Champions with untargetability are changed less often and are more likely to be buffed than nerfed

This was a factor I added at the last second, and it ended up being the biggest discovery of this project. “Untargetability” sounds a bit vague, but it includes removal from the game (Kalista, Shaco), invulnerability (Aatrox, Lissandra, Zilean), partial invulnerability (Elise, Fizz, Vladimir), untargetable dashes (Fiora, Maokai, Master Yi, Rek’Sai, Zed), and damage invulnerability (Kayle, Poppy, Tryndamere). Thanks Wikia!

Not only is this a huge factor in balancing, it actually works opposite to what I expected! Even though the score for the untargetables isn’t huge, keep in mind that these champions are otherwise very likely to be nerfed. 5 out of the 17 are manaless, and 13 out of the 17 have the #1 trait, which heavily favors nerfs. These champions should have been seeing the nerf bat a lot more often than they have been, although Shaco is lucky he missed out on pre-season 1 in this analysis. I can’t really explain this effect, but it’s a huge factor for champion balancing, apparently.

Everyone complains about more mobile champions crowding out the less mobile ones, and the balance teams seems to be listening to the cries. This is despite dashes being very rare on heavily nerfed supports. Our old friends Kassadin and Rengar are very influential in this, I’m guessing.

Many assumptions about the balance team’s work ring true in this analysis. Mobility, healing, shields and secondary resources all influence champion balance. These are all factors associated with assassins and supports, which supports the high nerf numbers for these two classes. However, untargetable champions have generally not been nerfed in the last 4 years, which might be contrary to what people believe. By these characteristics, the math says that Shen should be the champion Riot looks to change the most (not including the very new champs), while Vladimir is the one expected to change the least.

MF is a huge outlier here.

For this article, I used multiple linear regression with the 13 factors to try to figure out which ones could predict the number of changes a champion got, and what a champ’s score was. I used backwards stepwise regression, which means I first used all 13 factors (This was for “changes”, and all are dummy variables except Skillshots, Days since Release, and Difficulty): 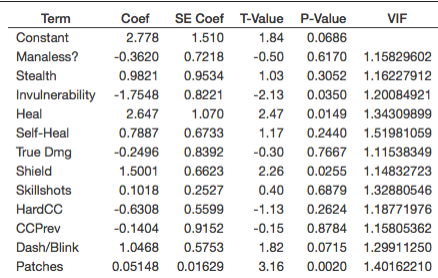 and whittled them down, one by one, by whichever one had the highest p-value. I stopped when removing a factor made the “prediction R-squared” go down. 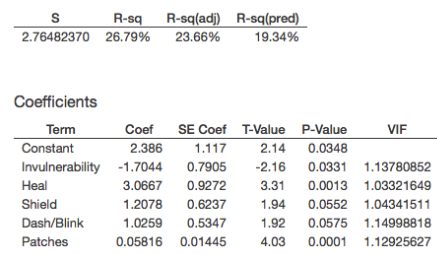 Even though the p-values were just over .05, they were acceptable because they made our R-sq(pred) go up.

The regression equations are: