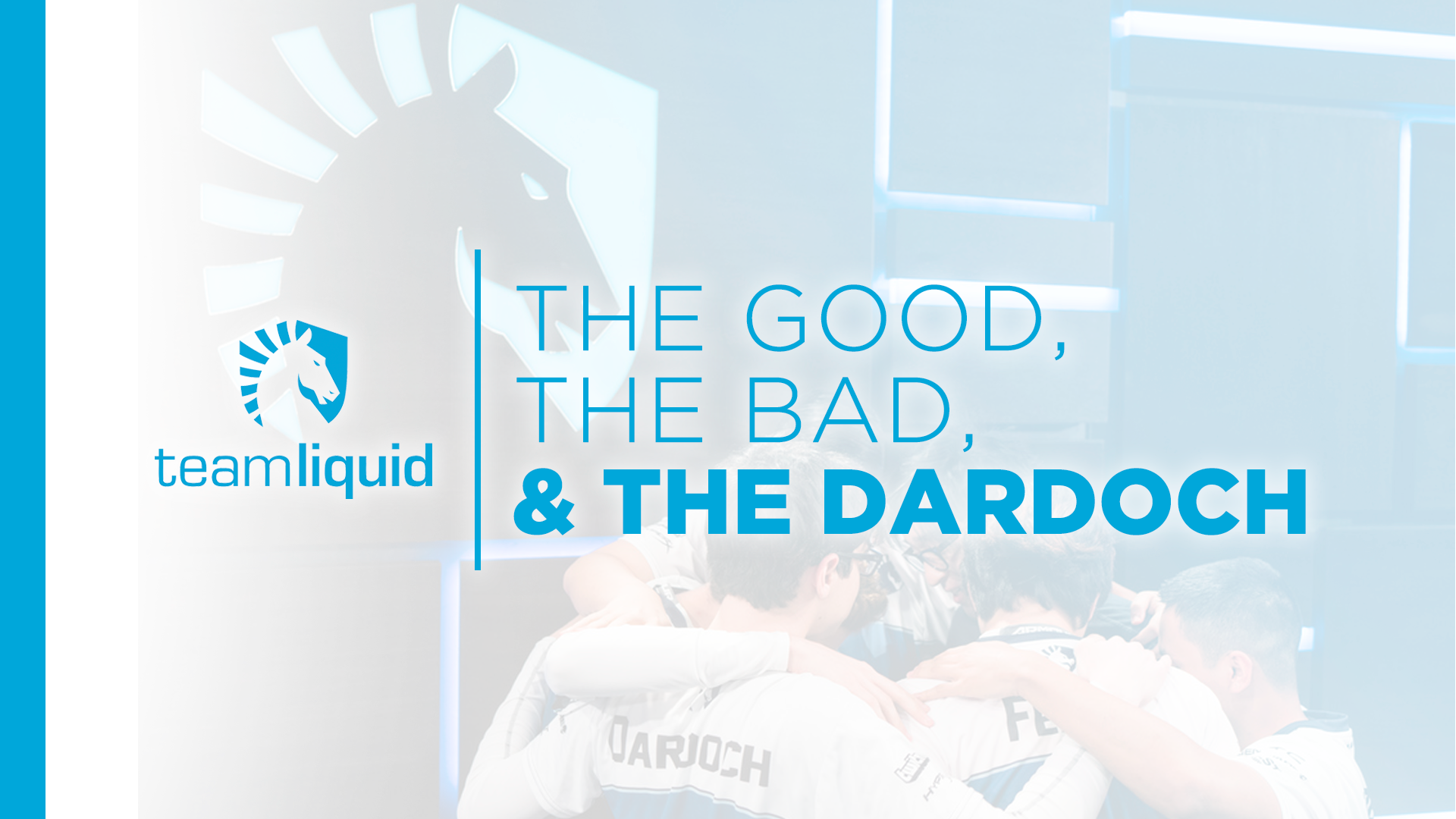 This article is the second of six that will be highlighting every North American League Championship Series team that made the playoffs, starting with the six-seed and going up. The current squad: Team Liquid. Before we dive in, let’s look at the roster:

Last split, this Team Liquid squad hit a wall: the “fourth-place curse.” In the regular season, the team finished No. 4. In the playoffs, the team finished, you guessed it, No. 4. Beginning the Spring Split with a 10-man roster, basically a combination of their LCS and Challenger Series rosters, Liquid looked to introduce something new to the NA LCS. The 10-man roster really just ended up being a full revamp, as Dardoch and Matt came from the CS team and became starters on the LCS team after one week, and Lourlo took over the top lane. Chae “Piglet” Gwang-jin, a former World Champion and Liquid’s starting AD Carry since Spring 2015, led the squad to their fourth-place finish last split in a meta that heavily favored ADC players.

Beginning this split, however, Liquid struggled heavily. Dardoch was suspended (initially for two weeks) for disciplinary reasons after reportedly getting into several arguments with some of his teammates and coaches, but he was brought back into the starting lineup mid-series in a Week One fight with Team SoloMid. Why? The team needed his shotcalling and ability to take control of a game. Without Dardoch, they were lost.

The problems persisted, however, and Liquid faced a 1-3 start at the end of Week Two, with their only win coming against the team who finished in last place, Echo Fox. There still appeared to be some sort of rift in the team. Just a day or two before Week Three matches started, Liquid announced that Piglet would be taking a break for the week and playing for the Team Liquid Academy squad, while fabbbyyy played for the main squad. It was only supposed to be a week, if we believe Liquid’s initial statement, but things got interesting when Liquid won both of their series.

So, the TLA takeover was basically complete. Dardoch, fabbbyyy, and Matt all had their spots. The team had synergy. For the most part, this squad looked really good. While Liquid went 1-3 in their first two weeks of play, they went 7-3 in the next five. Who was the squad led by? Dardoch.

Dardoch’s team listened to every word he said, and every call he made. He took control of this squad and all seemed well. The internal issues were a thing of the past, everyone was getting along and playing well. Of course, Dardoch’s leadership played a big part in this, but who was the consistent force behind Liquid’s victories? Well, it was still Dardoch, but his ability to dictate the flow of the game and gank the mid lane allowed FeniX to build up and look like an MVP-calibre mid laner.

The meta this split is all about the solo lane players and the jungle, as duo lanes are typically stuck in support and utility roles. Backtracking a bit, this is why losing a former World Champion did not hurt Liquid. In fact, it helped them. Piglet is a carry, not a utility player. This, more than likely, is what created somewhat of a rift in the beginning of the split. Piglet tried to play carry champions, it did not work, Dardoch lashed out… It all sort of makes sense if you think about it. Fabbbyyy, on the other hand, is perfectly fine with taking a backseat and playing a utility role while supporting his team and helping them win. Though fabbbyyy is a downgrade from Piglet on paper, his play style better suits the current meta and helps the team dynamic.

One of the ways that this replacement could fail, is if the meta shifts again and fabbbyyy has to actually play a carry role. Fabbbyyy has some of the lowest Damage per Minute and Creep Score out of all the ADC players in the NA LCS. Not being able to farm and output damage is not exactly a good thing for an ADC. Granted, the team dynamic does not focus on getting fabbbyyy farm and making sure he is putting out damage. After all, he is on utility champions. Still though, other players who use champions like Ashe, Jhin, and Sivir (fabbbyyy’s three most used champions) output exceedingly more damage and secure more farm overall. Piglet may take too many risks and play too hard with carry champions, but if the meta shifts, fabbbyyy may not be able to carry this team as the ADC.

But back to the solo laners, and more specifically, FeniX. As usual, FeniX is likely the most underrated player in the NA LCS. Last split, he was a constant in keeping his team afloat, but was outshined by Piglet. This split, the same story repeats itself, but this time, FeniX is being outshined by Dardoch. He is, however, getting a little more recognition due to the Player of the Game honors. In its most basic form, this is given after every game to the player who helps his team the most in a victory. Only two players in the league had more than FeniX’s eight: Søren “Bjergsen” Bjerg and Yiliang “Doublelift” Peng of Team SoloMid.

FeniX’s contributions are undeniable. This team may be led by Dardoch, but it revolves around FeniX. He has the highest gold share, creep score, kills, damage, damage per minute… Basically he gets the most resources and he makes sure he puts them to good use. FeniX is the constant in this roster. Even if we stop looking at his stats, his contributions are staring us in the face. He can lead. Yes, Dardoch is the in-game leader and the hype man and all of that, but FeniX is the calm veteran, leading by example and keeping his cool in dire situations.

FeniX may be the main resource eater and damage dealer, but it all still goes back to Dardoch. I mean, the guy was suspended for three games and he still had seven Player of the Game honors. That is still only one less than FeniX. Dardoch dictates the flow of games, puts both Lourlo and FeniX ahead, keeps the enemy jungler guessing trying to figure out where he is, and he is not greedy. His old personality was headstrong, fighting all the time, grabbing farm and kills that did not necessarily belong to him. In the Summer Split, Dardoch became a new player.

He has matured, both on and off the rift. Dardoch used to be easily tilted, and could cost his team the game if he let it get to him. Now, he stays focused and keeps his team positive, even in losing situations. On top of that, he knows what is his and what is not. Sure, he may be a bit over-aggressive at times and die a little too frequently, but every death sets up one of his teammates to get a kill. Dardoch sets his team up for success anytime he can. The same, actually, can be said for Matt.

Not really seen as one of the top supports in the league, Matt’s rise to the LCS from TLA went relatively unnoticed when compared to Dardoch. As everyone else on Liquid, Matt’s accomplishments are stuck behind Dardoch’s shadow. Like Dardoch, Matt dies quite a bit to set his team up for success. He does not initiate fights as much as Dardoch, but Matt gets vision and keeps watch over the map. When an opportunity arises, he makes sure his team knows that a play can be made. Does he die getting this vision and starting these big plays? Frequently, yes, but he sets his team up for success.

Everything has seemed positive about this roster after bouncing back from a 1-3 start in the first two weeks to go 7-3 in the next five, but something went wrong. Liquid ended the split the same way it began, 1-3 in the final two weeks.

What happened? That question is practically impossible to answer without insight from the team, but it is clear that Liquid is not playing at the same calibre and with the same synergy that they had in the middle of the split. One possible answer? Young leadership. Dardoch may have better control of his emotions now, but it is unclear just how much of a hold he has on them. Aside from that, Matt, fabbbyyy, and Lourlo are all young and relatively inexperienced at the LCS level. It is entirely possible that this team is just struggling under the pressure of competing against teams as talented as TSM, Immortals, Counter Logic Gaming, etc. When four out of five players are this inexperienced, nerves can kick in and that can lead to a drop in performance and even fighting within the team.

Did any of that happen? Who knows. Maybe Liquid just had a couple bad weeks and the squad will be back at full force for revenge against CLG in the quarterfinals after the 3-2 loss last split in the semifinals. Liquid can, because of their fourth-place finish last split, qualify for Worlds during the playoffs, but they would have to defeat both CLG and TSM to do so. That may be shooting a little too high. Still, they will keep CLG from auto-qualifying if Liquid wins the first-round match, and that is something worth fighting for.

In an interview with theScoreesports, Bjergsen stated that he would rather face CLG than Liquid in the semifinals, calling attention to Liquid’s inconsistency and saying he is “kind of scared” whenever facing Liquid because sometimes the team is “world-contending” and other times “just average.” Getting Bjergsen even slightly worried shows just how good this Liquid squad can be. It all depends on how they show up.

Can Liquid take down CLG in the first round? If so, can they push it to the next level and beat TSM? Let us know by commenting below or tweeting us @GAMURScom.