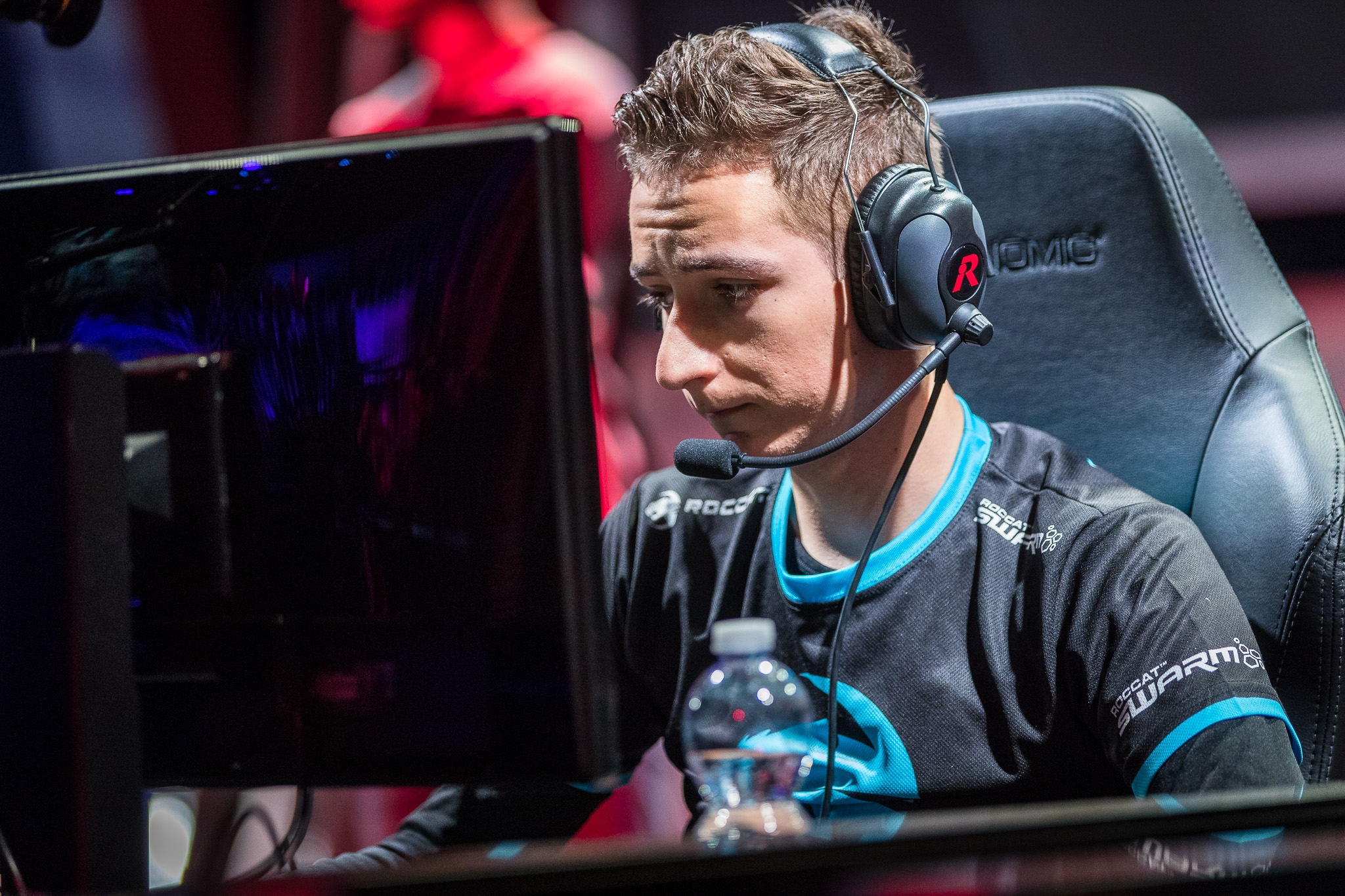 ROCCAT stand up from their desks and breathe a heavy sigh of relief. They’ve escaped relegation, again. Yet despite the victory, you can’t help but feel for one player: Pierre “Steeelback” Medjaldi.

If Steeelback were a superhero, he’d be “Captain Reliable.” Yes, this sounds pretty boring. But every crew needs that person they can always count on. When things go south, Steeelback isn’t going to single-handedly carry you to safety, but he won’t crumble along with everyone else. Unlike players like Yilliang “Doubelift” Peng and Konstantinos “FORG1VEN” Tzortziou, he doesn’t rely on mechanical ability, but superior teamfight positioning. It’s for this reason that he deserves better than bottom of the standings with the rag-tag ROCCAT side.

An air of uncertainty has followed Steeelback throughout his career for reasons I can’t fully ascertain. Drafted straight out of Challenger and into one of the best teams in the region, did he crumble? Did he fall apart under the pressure of performing alongside Fabian “Febiven” Diepstraten and Heo “Huni” Seung-hoon? Hell no. Steeelback played his role, collected the highest KDA in the LCS, and unsurprisingly got the boot when Fnatic’s prodigy, Martin “Rekkles” Larsson, came back home after running away to Elements for a split.

Then came the dark period, the few months he spent in the North American Challenger Series. Team Odyssey, which will forever be remembered as pharma bro Martin Shkreli’s failed attempt at esports, then merged with Team Imagine to form a largely forgettable attempt at qualification to the LCS. I don’t think I even need to point out who the best performing player was.

After having enough of floundering in the abyss of the North American Challenger Series, Steeelback made his way back to Europe. Initially primed to take the vacant Gambit Gaming spot, he eventually ended up on Unicorns of Love. It finally looked like Steeelback might get his chance to prove his carry potential. But Riot Games had a different plan.

Goodbye Danil “Diamondprox” Reshetnikov, perhaps one of the best junglers of all time, hello Rudy “Rudy” Beltran, and later Jean-Victor “Loulex” Burgevin. The legendary Russian jungler was forced out of the LCS when Riot implemented new visa requirements for the league. Despite the obvious setback this caused, Unicorns of Love—not just Steeelback—actually managed to clock a half-decent season. Fifth place in the regular season led to a playoffs tie against Origen when they were still a top European team. It wasn’t a surprise when they ultimately lost to Origen, but it did lead to an exodus of the starting lineup, including the journeyman Steeelback.

This is how he found himself on ROCCAT. Rebuilding after a dismal Spring Split, the side retained Felix “Betsy” Edling, who seemed to be growing into a solid, middle-of-the-pack mid laner in the region. Recruits in the form of Steeelback and two South Korean imports could have been promising, but once again he ended up being one of the few bright spots in a largely disappointing lineup.

Steeelback certainly isn’t the standout, key player on most of these teams. But not once has he been the breaking point, either. On Fnatic, as a rookie in the LCS, he played clean-up crew for the side, refining what are now his defining features: positioning and teamfighting. He’s one of those players that will almost always be in the right place at the right time, which counter-balances his relatively weak laning phase. He thrives best when on a team that doesn’t rely on him as the sole carry.

ROCCAT, though perhaps unintended, featured almost no carry potential from any other lane. Lee “Parang” Sang-won may go down as one of the worst imports in LCS history after a terrible Summer Split, while Betsy failed to live up to the hype he built after promising performances last split. Failure was inevitable, and yet despite the torrid season, Steeelback can look back at a performance that doesn’t warrant a fight against relegation. He’s not a world-beater, but certainly at the very least he’s a mid-level player capable of holding his own against the region’s best.

He deserves better. But where? Leaving Unicorns of Love after the Spring Split was a mistake in hindsight, but a return wouldn’t be out of the question. Kim “Veritas” Kyoung-min didn’t have a groundbreaking split and the move would free up a valuable import slot that so many teams are looking for these days. Having prior experience with Zdravets “Hylissang” Galabov is a key factor that could make this move a possibility.

LCS veterans Origen just survived a close scrape with relegation alongside ROCCAT, and will definitely be on the hunt for a new AD Carry after owner and usual mid laner Enrique “Xpeke” Cedeno was forced to fill in at the position for most of the season. Carry threats in the form of Paul “sOAZ” Boyer and Tristan “PowerOfEvil” Schrage could allow Steeelback to thrive alongside the well-respected Glenn “Hybrid” Doornenbal in the bottom lane. Origen certainly need an answer to their problems, and Steeelback could just be it.

Each time the silly season of roster changes rolls around, we get moves that we could have never predicted. So who knows, maybe ROCCAT will look to improve their own squad after re-qualifying for the LCS. If they can acquire new talent in the top lane and newcomer Jonas “Memento” Elmarghichi can continue improving after a strong showing at the promotion tournament, ROCCAT might just have the talent needed to make a playoff push.

Hopefully Steeelback will find the right mix next Spring. Perhaps his laning phase still needs some work, perhaps he’s not capable of mechanically outplaying the stars of the region, but with Steeelback you get consistency, and there sure isn’t a whole lot of that outside of the top few teams in Europe. Maybe it’s time for teams to stop overlooking that facet of Steeelback and actually utilize him to his strengths.