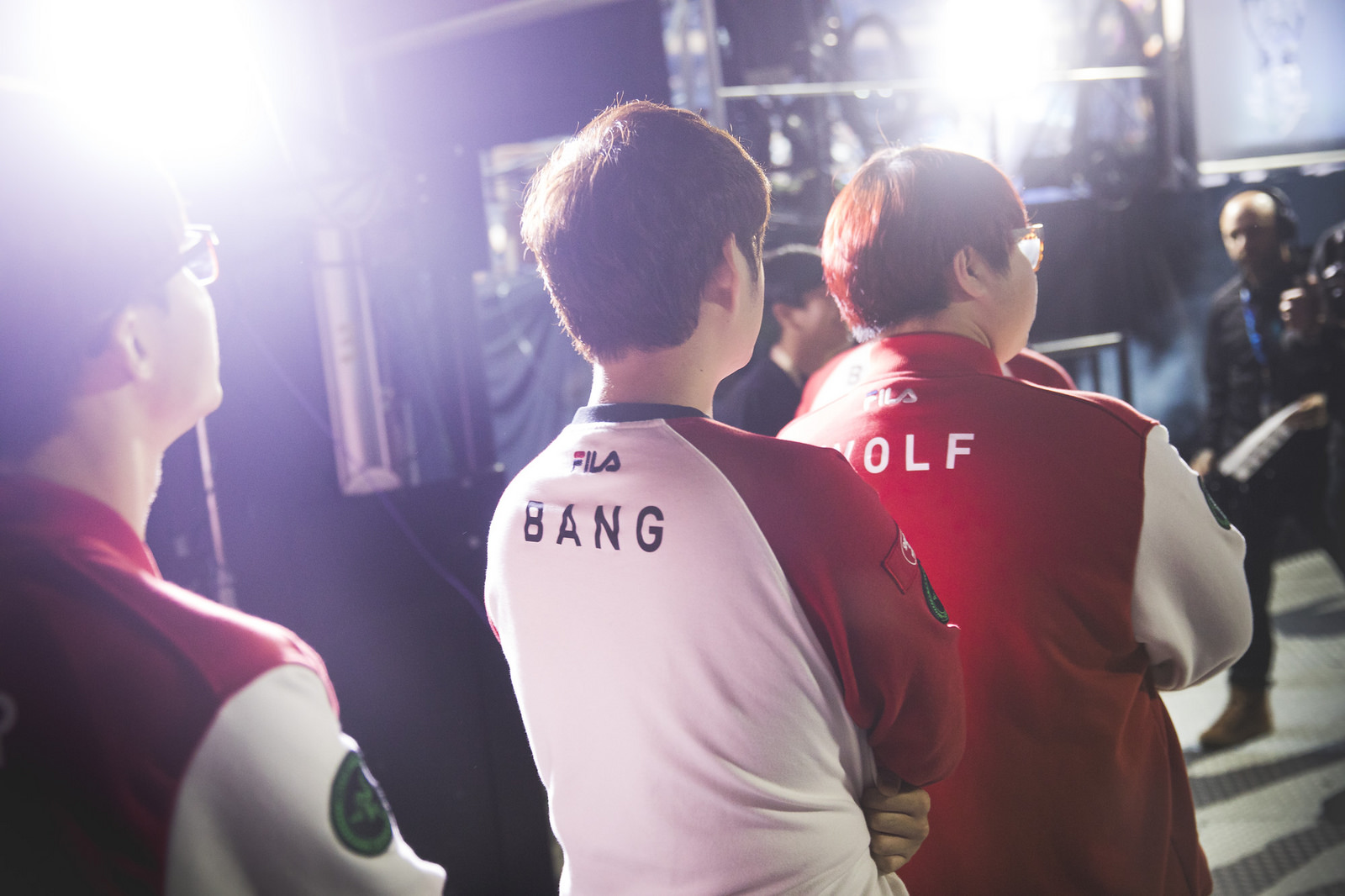 Everyone knows that SK Telecom T1 is Lee “Faker” Sang-heyok’s team. He’s the best player in the world. But a lot of their success over the past two years can be attributed to their bottom lane duo of Junsik “Bang” Bae at ADC and Lee “Wolf” Jae-wan supporting him.

Following their latest Worlds victory, both players spoke with Inven Global in separate interviews to talk about their time on SKT and life as pro gamers. They talked about life before turning pro, playing on SKT, and what their motivations are going forward.

Both players were introduced to League while in high school. “When I was a freshman in high school, one of my friends asked me to play League of Legends with him,” said Bang. “I soon noticed that I was pretty good.” Wolf, too, started young. “Ever since I reached the top of Korean solo queue back when I was a 10th-grader, I wanted to go pro.”

Both had trouble balancing the number of hours required to climb on South Korea’s ladder with their school requirements. For Bang, that balance was “very exhausting.” Wolf had another solution. “I asked all ten of my teachers to let me sleep in class because I wanted to practice LoL all night to become a professional gamer,” he said, laughing. “Six of the ten said it was okay for me to sleep in class.”

Initially, Wolf wanted to play a high-damage style: “I don’t like playing support, and I rarely play support in solo queue. In other games, I usually like to play DPS,” Wolf said. But then he had a realization: “there weren’t many good amateur supports.” So, in a decision that would shape his trajectory for years to come, he chose to practice that role while Bang became an ADC.

Making a career out of a video game can be tough but Bang’s family accepted his decision to turn pro. Wolf’s mother required more convincing, but now she seems all-in on her son’s profession. “She keeps up with all sorts of things in the scene, even rumors such as Faker’s salary and how Mata is doing in China,” Wolf explained. “She even knows things that I’m not even aware of. I think it’s pretty amazing.”

The pressure of SKT

Bang actually started his pro career with Korea’s other telecom side, KT, before moving to NaJin Shield and Xenics Blast. He said that he matured a lot with those organizations, while having some of the best times of his life. “I had zero stress about winning back then. I just loved every minute of everything,” reminisced Bang. “I didn’t play so well, granted, but it was my happiest times as a pro player. I’m pretty happy right now too, of course, but it can’t compare to back then.”

Happiness is also a fleeting feeling for Wolf as well. “I guess I’m the happiest now?” Wolf wondered. “I was pretty happy when I won my first LCK, Worlds, Korea eSports Awards, and this year’s Worlds, but I’m not sure when I was the happiest.”

Signing with SKT changed a lot for both players. One of the major influences is coach Kim “kkOma“ Jung-gyun’s brutally honest feedback. “[kkOma] made me realize I’d been approaching the game entirely wrong,” Bang said. “It was a real wake-up call.” But kkOma’s tactics have clearly worked. Bang continued: “Under kkOma’s new practice routine, honest feedback, and effective conflict mediation, I saw myself improving daily. It was pressure, but also a reason to push myself harder. kkOma helped me believe in myself.”

Wolf acknowledged with that much pressure, burnout is real. “To be honest, I was able to continue pushing myself due to the numbers in my bank account,” Wolf said. “Also, there’s pride involved–I want to meet fans in my best form.”

Despite SKT’s success, that pressure can be hard to balance. “My first emotion after winning [Season 5] Worlds was relief: ‘Thank god we won.’”, Bang remembers. “The fact that one mistake could cost us a game weighed on me so heavily. Yes, everyone makes mistakes, but I was unable to forgive my own. So I worked all year long to play as perfectly as possible.”

It’s fun to watch League’s starry-eyed teenagers turn into real professionals. But there is a cost to that journey as well. The popular saying is that winning cures all, but for Bang winning in Season 5 only increased expectations and pressure in Season 6. “I began to think: ‘I won everything there is to win, but I still have to do the exact same thing all over again. I’m back to square one. Nothing really changed, except for even more pressure’”, Bang said.

Frustrated by that pressure and by comments from outsiders not familiar with the amount of work he put in, Bang turned to counselling. “I learned the power of optimism and tried to apply it in real life,” Bang explained. “I’ll have a solid state of mind to fall back on when the time comes for me to quit competitive gaming. Last year, I grew as a player. This year, I grew as a person.”

Wolf, too, has had to find motivation. For him, it goes back to his roots. “My mother has a heart condition. I gave her my credit card so she can go to nice restaurants and pay hospital bills. She still doesn’t like to use my credit card, but I wish she would and get better. I think she feels that the money I earn is too precious to spend.”

Going into this third year with the team, Bang has gone from the fun-loving teenager to a steely pro. League may not have the same appeal as it did when he was a teenager, but gaming is in his blood. “Although it’s tough at times, I believe this is the best job for me,” Bang said. “I don’t think I’d be as happy doing anything else.”

Wolf, though was more about continuing as a pro gamer for a long time. “I feel like I’m wearing a mask,” Wolf began. “I want to be Jaewan Lee, but I’m wearing a mask called ‘Wolf’. I don’t think I’m cut out to be a pro gamer.” If not a professional gamer, then what? Wolf’s thought of that, too. “If I quit being a pro player, I’d like to explore other options in eSports such as commentator, caster, reporter, or counsellor,” Wolf said. “Or maybe I’d leave eSports and try to become a literature teacher, which was my dream before I got into gaming.”

With his colorful personality and drive to improve, Wolf should succeed at whatever venture he sets out on.