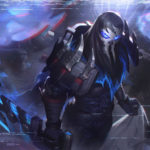 A total of seven new League of Legends skins are arriving on the live servers in this patch, including the second batch of PsyOps skins, Championship LeBlanc, and True Damage Yasuo’s Prestige Edition.

In Patch 10.18, Riot Games debuted the new spy-themed PsyOps skin line with skins for Sona, Ezreal, Master Yi, Shen, and Vi. This time around, however, Pyke, Viktor, Zed, Kayle, and League’s newest champion Samira will all receive skins for the thematic.

Riot is also releasing the latest Championship skin ahead of the 2020 World Championship, which kicks off on Sept. 25. LeBlanc is the lucky recipient of this year’s esports-inspired look and reps purple, blue, and gold colors in honor of the international event.

Like previous True Damage Prestige skins, Riot Games has teamed up with AAPE BY *A BATHING APE to create a Prestige Edition for True Damage Yasuo. The special variant of Yasuo’s hip-hop-themed skin features the swordsman in golden streetwear with AAPE’s name running up one side of his jacket. Fans can purchase the Prestige skin with 100 Prestige Points from the Hextech Crafting tab.

Each of the PsyOps skins will release with a set of eight chromas for additional purchase. There will also be three chromas for Championship LeBlanc in celebration of this year’s League World Championship.

Championship LeBlanc will hit the Rift alongside the newest round of PsyOps skins on Sept. 17. True Damage Yasuo Prestige Edition will arrive on the live servers on Sept. 25.