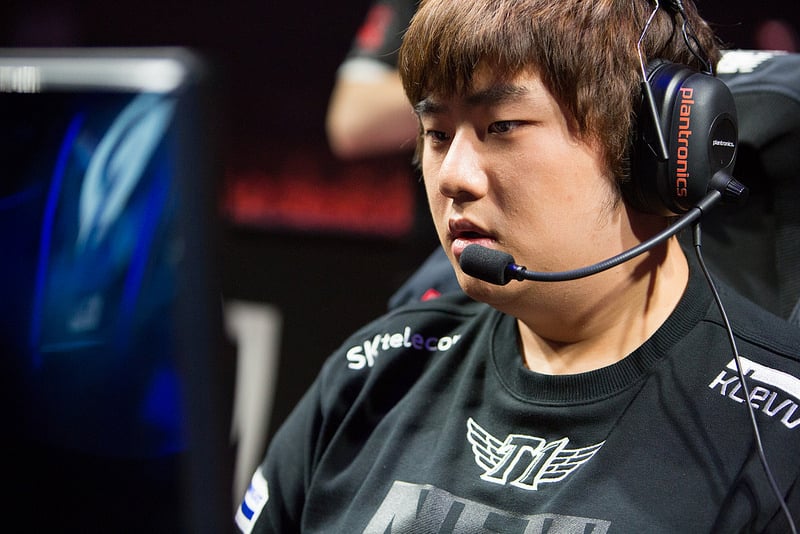 The League of Legends World Championship is the premier tournament of the year held by Riot Games in four different locations this year. Paris, London, Brussels, and Berlin. In Brussels, Belgium where the Semi-Finals games were played this year, four teams clashed to meet in hopes of advancing towards the World Championship Finals and hoisting the Summoner Cup above their heads of whom only 20 players have had the grace of doing so.

Rankings are chosen by performance displayed during the Season 5 World Championship Semi-Finals.

The 1400 LP Solo Queue god that is Bang has undoubtedly unleashed his true potential at the Season 5 World Championships Semi-Finals. Bang’s overwhelmingly dominant marksman play is evident by his 73 KDA that was unfortunately ended by AHQ’s support, Albis. First game with SKT T1 on blue side first picked Bang his terrifying Kalista, which he is professionally undefeated on with 13 wins and 0 losses. Bang’s performance may not necessarily create hours of mechanical highlight outplays but if Bang was anything, he would be consistent. Bang’s hour of hard carrying SKT T1 in the spotlight may not be clear as OG Niels’ role in his team but Bang is without a second thought, one if not the best marksman in the world. Regardless of the final result, Bang who made his professional debut in October 2012 on Najin Shield, has made it to the Worlds finals playing for one of the largest Korean eSports organisations, SKT T1.

The captain of the Korean League of Legends powerhouse team, SKT T1, has shown to the world not only can he play tank/utility champions such as his famous Maokai which he has professionally won 36 games and 1 lost on, but can also be flexible in his playstyle to carry when his team needs. In their match versus European fan favourite, Origen, MaRin flaunted one of his all-time dominant champions, Rumble against the French veteran, sOAZ. MaRin has had an astounding performance without faltering in any of his matchups versus elite tier top laners in the World Championships. MaRin is the top laner with the highest Average Gold Differential at 10 Minutes at 451.0 while his adversary sOAZ only sits at 3.2, the lowest of any Semi-Finals top laner. MaRin’s brilliant performance definitely attests to him being one of the best top laners and players in his respective position. With kkOma’s fantastic strategical mind, MaRin is definitely more set up for success than sOAZ by having the highest Average Share of Team’s Total Gold at 24.9% but it doesn’t diminish how important MaRin’s value in his team is.

Smeb has definitely show cased his world-class hard carrying style on champions such as Fiora, Hecarim, Riven and Darius in the Semi-Finals match against Fnatic. Smeb, unlike his opponent Huni, has proven he can perform consistently in a long Best of Five matches. Playing in LCK BO3 regular week-to-week format has given Smeb experience to deal with those series in which we have one or two off games. Smeb did not falter when it came to the matchup versus Huni. Huni thought he knew the true definition of carry, but when push came to shove, Smeb annihilated Huni on the rift with his Flame-esque carry style. Without a doubt, Smeb controlled the champion Fiora as if he had embodied her himself and decimated Huni’s infamous Riven play. First in Game One, Smeb played into the Hecarim matchup with Riven and Game Three into the Riven matchup with Hecarim. Smeb sits atop the ladder of most kills for individual player at 74. Eight kills above the next highest holder, his teammate Kuro at 64. The KOO Tigers’ demon top laner also holds the title for highest Average Share of Team’s Total Damage to Champions at 27.3% while his opponent Huni sits below at 22.9%. In every possible sense of the word, Smeb is the true definition of a ‘Carry’.

GorillA has been the pinnacle of the KOO Tiger’s success throughout the Semi-Final series against the European Titans, Fnatic. In Game One of the series, WIth Tahm Kench being a highly contested pick as the tournament has progressed, GorillA picked Alistar first rotation on red side to deny it from the deadly hands of Fnatic’s captain, YellOwStaR. GorillA leads the scoreboard with most assist of any individual player at Worlds at 167 assists, averaging 12.8 assist per game. Out of all four supports in the Semi-Finals, GorillA has the highest Kill Participation with a whopping 76.4%, whereas YellOwStaR has the lowest at 65.4%. GorillA also has the highest Average Wards Placed Per Minute at 1.45 of any of the top four supports while also maintaining the lowest Average Wards Cleared Per Minute at 0.24, where his counterpart YellOwStaR has the highest at 0.31.

GorillA has displayed his mechanical prowess in all of his games and certainly did not disappoint us coming into the Semi-Finals of the World Championships and he shows no sign of slowing down. Showing off his deep champion pool with 7 unique picks in 13 of his games at the World Championship so far. We have yet to see any more crazy pocket picks from GorillA since he pulled the Tahm Kench out in the Group Stages versus Counter Logic Gaming. Coming into Worlds GorillA has been hyped by many players and analysts alike, and so far he has shown us his name deserves to be cemented as not only the best performing player in the Semi-Finals but as the Best Support in the World. GorillA display of his godlike teamfighting and positioning skills has definitely proved to us his dreams of etching his name on the Summoner’s Cup can come true.