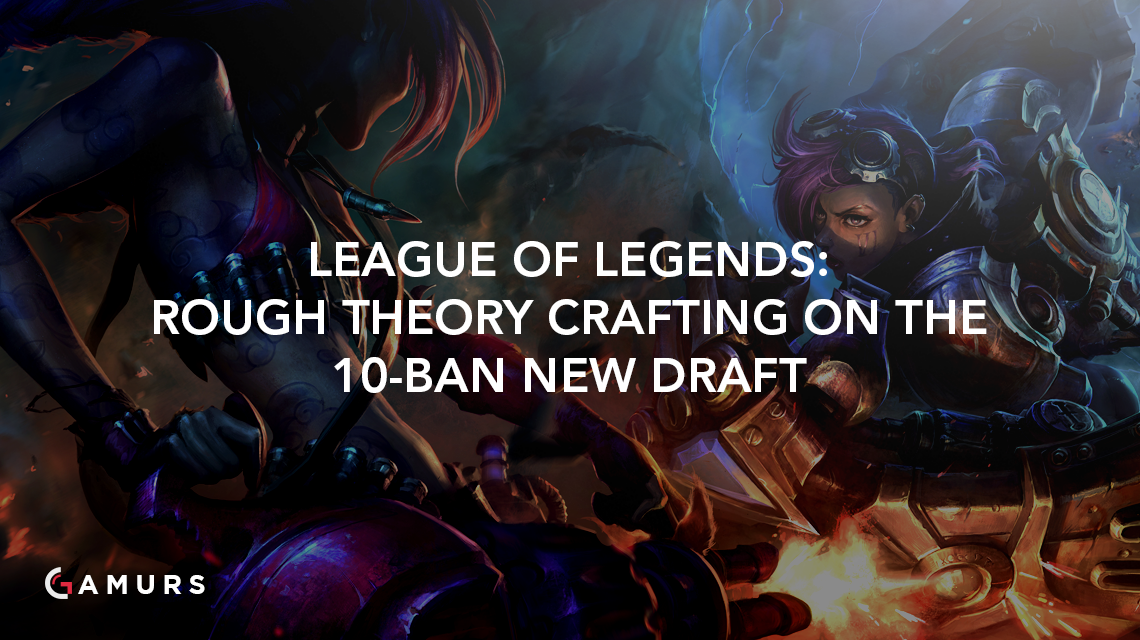 Riot released the new competitve draft format, and it looks quite interesting. The additional ban phase has the potential to improve champion diversity while exposing players with weak champion pools. It adds an additional dimension with impact to all phases of the draft. The best way to understand this is through a combination of recent drafts and hypotheticals.

BANS *Important note: both teams stuck to their bans through a remake/redraft.

RNG’s strategy is clear: Nidalee/Rek’sai are comfort champions for TSM’s jungler, Dennis “Svenskeren” Johnsen, and they don’t want to pick Elise in their first rotations. RNG also knows that Sven will probably pick Lee Sin; when RNG took Lee, TSM had options like Olaf/Hecarim available and instead took Skarner. If TSM doesn’t take Lee, then RNG gets Lee Sin and another strong first round pick.

At first glance this seems slightly insane on RNG’s part: why pick two solo laners and set TSM up for two counterpicks? In theory, it looks like a bad setup: TSM is given the choice to pick either their solo laners here with counters or take their bot lane, or some combination of the two. If we look at this draft and the remake one together, Cassiopeia is the other hotly contested pick between both teams, and in RNG’s eyes, there isn’t much on the board to answer the Cass pick especially with Aurelion Sol off the table (remake was due to a Sol bug and removed him from play).

TSM opts for their botlane picks in the next phase:

RNG answers TSM’s botlane picks with with Hecarim and Sivir. This cycle shows TSM’s priority is higher on Jhin than on Sivir based on the draft in front of them, pressured even further when Cass is on the opposing team: the issue is not just “Jhin is a good pick” but “we can’t give them Jhin/Cass/Rumble” unless TSM has an answer for that type of comp. Nami here serves two purposes then: assert a strong botlane and provide a teamfight tool when the game progresses past laning phase.

RNG’s Hecarim pick places thier composition deeply into teamfight territory and cements this composition with Sivir. In lane, Sivir’s strong pushing force will likely keep here out of towerdive territory, while her ultimate will allow RNG to dictate the fights they do and don’t want.

TSM picks its answers to RNG’s laners and team comp, while RNG’s final Alistar pick finishes off the draft.

Rather than discuss all the intricacies of the draft at the end, let’s theorize what would happen under the new system.

The new system makes RNG’s drafting strategy effectively force both teams to take a jungler in this first pick phase; if RNG doesn’t take Hecarim, TSM could use its two bans to force RNG into a catastrophic jungle matchup. On the other hand, ERNGDG can spend their two bans on a top and mid lane champion to push for two winning lanes. TSM here can spend its two bans on bottom lane to stretch a lead even further here for themself. At this point TSM theoretically loses the draft: at best, they have one lane to win through to compensate for two other lanes. Adding another ban phase into the draft creates complex dimensions for analysts and coaches to work through, trickling down to how players will be developing their pool.

Teams now have some choices to make about the draft that they didn’t have before: do you pick in the same lanes as the other team during the first phase, getting matchups that are at least close, or do you accept the losing lane and pick a stronger set in other areas of the map? Forcing teams into specific picks is a double-edged sword. Sure, you can ban out three junglers, but if the pool of playable champions in a role is small, you’re forced into the picking for the role as well.

A conservative strategy is to ban out strong heroes with limited counters; these are champions that can be blind picked with relative confidence or don’t have good responses. On blue side, ban out one strong pick in each lane, while red side bans out strong “first pick” champions (this is how TSM vs RNG played out). In the pick phase, teams will simply go down the list in priority: which champion is worth the most at the given moment? Then the second ban/pick phase is about enhancing the comps: if you win through lane, win harder. If you teamfight, ban out their (dis)engage. The first pick rotation should be able to reflect the way a team wants to win, while the second will see teams vying for compositional enhancement.

The fundamentals of a draft do not change, but coaches and analysts will have different options for how to manuever setting up for the game. Consider the old model: red side could hold its last pick as a counter to any one of blue side’s picks. That isn’t the case any longer, since those options can get banned out. Holding onto a pick is a risky gamble, one that may end up costing a team the game. Players and coaches need a bigger set of answers to the meta champions compared to before.