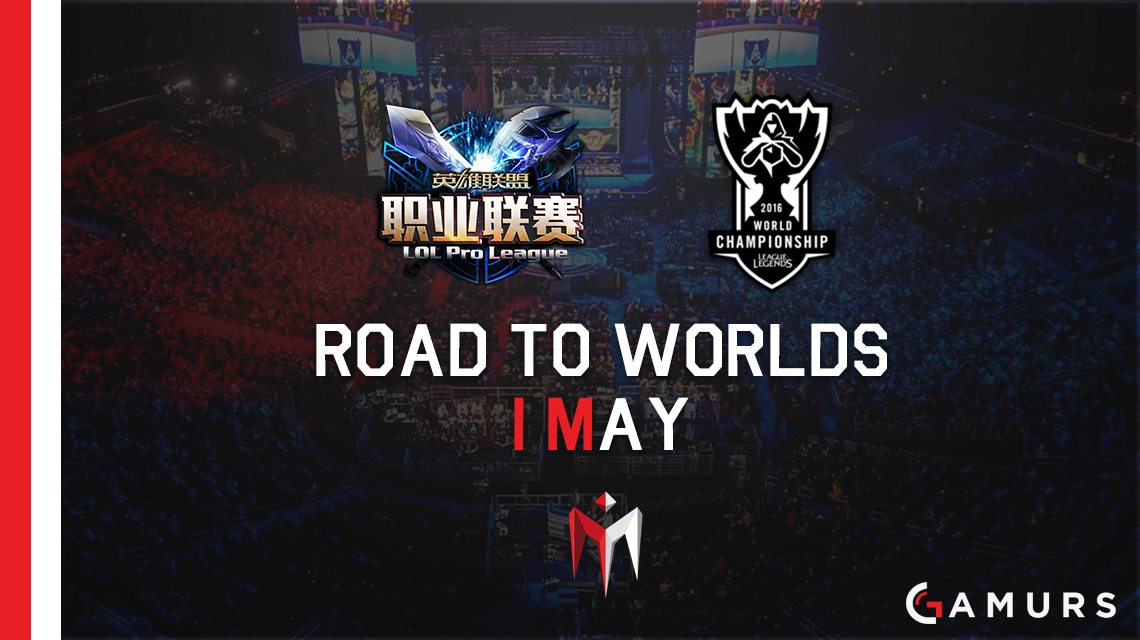 A GAMURS exclusive series, taking a look at the 16 teams goingto Worlds from the beginning of their qualification and see justhow their road to worlds went. Today, we look at “I May,” formallyknown as “EDward Esports,” of the LPL.

The start of challengers to the LPLs prodigies.

It’s odd to think that I May began as EDward Gaming’s Challengerteam, simply called EDward Esports (EDE) in the second tier of theChinese League. They were formed on Dec. 25, 2015 and would be oneof the 16 teams, yes, 16 teams, competing in the LOL Secondary ProLeague (LSPL) for a chance to get into the top 4 in order to playin the playoffs to go into the Summer Split as an official memberof the LPL.

Matches are best-of-ones with teams having to play three matchesthroughout the week at various times and intervals to allow forsuch a huge roster of teams and players taking part in theSecondary division. Three games over a three day period.

EDE were quick to show their dominance in the leagueweek-by-week, finishing at the top of the table with an impressivedisplay that ended in a 25-5 record, only losing to a few teamsoverall to take 1st place commandingly and put them at the top ofthe playoff position, being joined by Young Miracles, MF Gaming and2144 Gaming for a chance at that automatic qualification spot intothe LPL.

EDE would be waiting in the final round to meet 2nd-place YoungMiracles in a match that would last five games to crown EDE winnersof the Spring Playoffs.

EDE would be able to jump the gun and gain automatic promotionto the LPL by winning the Summer Playoffs and miss the SummerPromotion tournament that awaited Youth Miracles and MFGaming.

This would be the last appearance of the team EDward Esports asthey were bought and rebranded into Team I May, due to Riot ruleson more than one team being owned by the sameorganization. The team kept its original roster in placefor the Summer Split 2016 for the LPL with greater things still tocome.

I May is born

The LPL, for those who are unaware, is split into two differentgroups of six teams. Both groups follow best-of-three formats,winning a game gets you one point, losing a game loses you onepoint, and the teams with the most points at the end are placedhigher in the playoff brackets.

This would be I May’s entrance into the LPL in Group B, with theworld stage just one step away in a league filled to the brim withimposing players and teams. But I May would be sure to start withan impressive debut, beating LGD Gaming 2-0 to take their first twopoints as an LPL team.

I May would finish in group B as tied for 3rd, leading thetiebreaker scenario over Vici Gaming, to take them into playoffs intheir debut split. In the first round, I May faced off againstInvictus Gaming of Group A. It would be a clean sweep 3-0 for IMay. This would find them against Snake eSports, 2nd-placefinishers in Group A, for a more challenging fight, but even Snakewould be unable to stop I May from advancing as I May took theseries 3-1.

Only one team was now standing in the way of I May and a chanceto play in the finals and fight for the unlikely 1st-seed fromChina. That team, would be the monoliths which were Royal NeverGive Up (RNG).

RNG took the first game uncontested from I May, but I Maythen took the next game to tie the series at 1-1. This wouldproceed into games 3 and 4 with the series then tied at 2-2 ,butalas, it was not meant to be as I May were soundly beaten andforced to head into the 3rd-place match. RNG would go on to faceEDward Gaming, with I May being forced to fight Team WE. I May wonthe match 3-1, took 200 Championship Points and the top seed goinginto the Regional Qualifiers, their last chance to get toWorlds after just coming out of the Secondary League a few monthsago.

I May would have to wait awhile to find out their opponents,with Snake taking out Vici Gaming in the first round and Team WEdispatching Snake in the second round in unconvincing fashion toset up a date with destiny with I May.

Team WE would be the ones to take first blood as they looked tocement themselves as the third seed for the LPL once again,starting the series off 1-0 in their favor. However, I May wouldstrike back, showing exactly why they finished 3rd overall in theirfirst split in the LPL to tie the series 1-1.

Team WE would not allow I May any breathing room at all as theytook the series back to 2-1 in their favor, but they would beunable to keep up the momentum as I May regained a tie in theseries, taking it all to that final game for that final Worldsspot.

I May would not sit down. The team beat WE to the 3rd placeoverall in the LPL Summer Split and would once again, findthemselves toppling the giants and stealing that all importantfinal win to take the crown and take the 3rd seed into Worlds.

I May’s final roster heading to Worlds is Shek “AmazingJ” Wai Ho in the top lane, Fan”Avoidless” Zeon Wai in the Jungle,Kang “Athena” Ha-Woon in the mid-lane, Xie”Jinjiao” Jin-Shan as the marksmen and Yun”Road” Han-Gil as the team’s support.

This, ladies and gentlemen, is I May’s “Road to Worlds!”