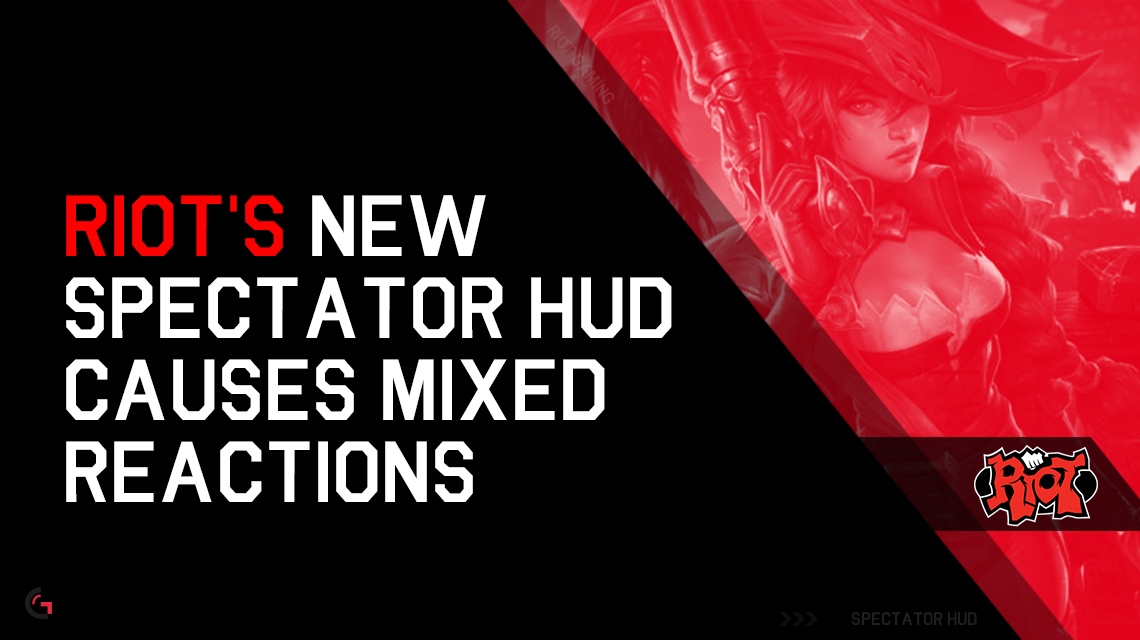 In a post atlolesports.com, RiotGames debuted the new heads up display for competitive matches. Thenew look has not yet been pushed out, but Riot showcased what theyhave been working on in a week seven match between Counter LogicGaming and Immortals. They asked for the viewers to take a look atthe new HUD, and give their thoughts on where improvements could bemade. The reactions, unfortunately for Riot, were mostly negativeas the new HUD really strayed away from the traditional and currentHUD.

In the post, Riot stated theirgoals with the introduction of this new HUD, saying that they werelooking to “get rid of the clutter and optimize for viewingthe action.” In order to do that, they said they have“…rethought the layout and have cut down and consolidatedthe elements on the screen.”

Riot also wanted viewers to“… more quickly and easily understand the state of thegame, going on to add that “At the moment, it’s not alwayseasy to follow stats and info during a pro match.”

Riot stressed that this is stillvery much a work in progress, and are looking for insight from thepublic on where they can improve. At this time, there is currentlyno set date for when this new HUD will be introduced in livematches.

For those unable to watch thevideo linked above, here is a quick screenshot of the new HUD inaction:

As you can see, the traditionalchampion stats on the bottom has now been trimmed down and moved tosit vertically on the left side of the screen, with item buildspositioned like they are in-game to show three items on the top rowand another three on the bottom. The usual things, such as summonerspells, health and KDA, are still visible.

One new feature is the number inbetween the two champions. For example, we can look at the matchupbetween Gragas and Rek’Sai. We can see a +1.0k in blue, whichmeans the person on the blue team in this matchup, in this caseRek’Sai, has a 1.0k gold advantage over the enemyjungler.

The new champion scoreboard hasbeen the target of most of the negative comments, saying that itfeels “alien” as one person put it, to have the boardon the left side of the screen. Other people also called the statsnow “…extremely distracting,” as well as “…super weird and awkward.”

The scoreboard on the top wasalso trimmed down, and is now much more thin, and takes up lessreal estate on the screen, as was Riot’s intentions with thenew HUD. The trade off there is it is now for some people,including myself, difficult to understand the information in thebox. With people touching on how hard it is to quickly glance andtell the difference between kills and towers taken.

One other major change is theremoval of player cams from the stream, which was met by muchcriticism. When this change came up in the discussions, a Riotemployee responded by saying the following: “We think thatplayer cams are great and we plan to work with broadcast to bringthem on to show player reactions when necessary. Ultimately though,in the interests of maximizing the amount of space available towatch game play, we decided to pull player cams as a permanent HUDelement.” One person replied to this by saying“I’m fine with whatever they do, just not removing theplayer cams.”

There are some people, theminority, who say they like the changes, and refreshes the game forthem. Whether or not people will adjust to this new HUD is yet tobe seen, but I can tell you that it has grown on me since I firstsaw it. It will take time to get used to the champions on the left,if that is where they remain and Riot does not adjust it back tothe bottom. Like they said, it is a work in progress, so thingswill likely change.

Finally, here is a screenshot ofhow the HUD folds down during teamfights to showcase more of theaction. Everything stays the same for the most part, but thechampion scoreboard collapses to show just summoner spells, HP, andthat green dot, which is the player’s ultimates. This, ofcourse, is combined with the usual zoom out that occurs when alarge fight begins:

What are your thoughts on the HUD? Let us know by tweeting us @GAMURScom, or leaving a reply below.