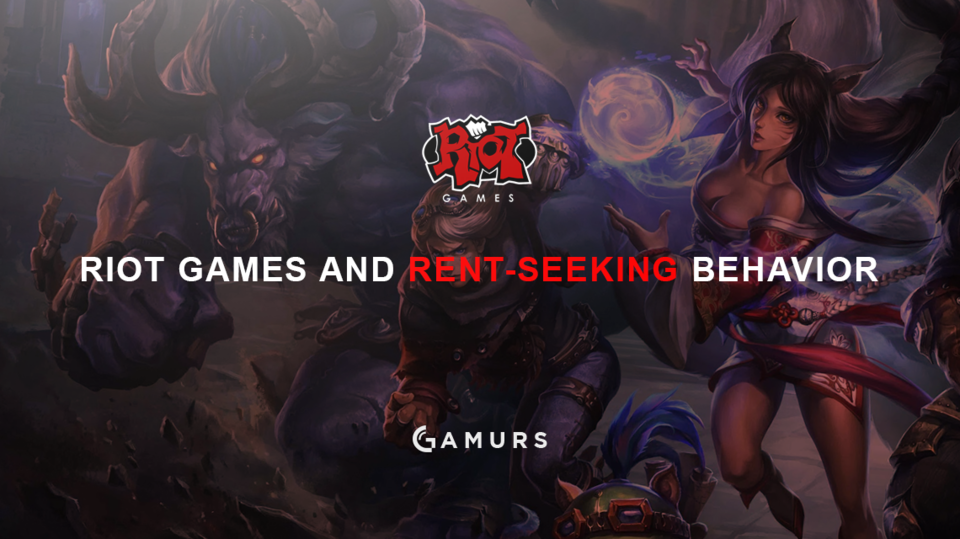 In his most recent video, Monte Cristo highlights that team owners and casters are also hamstrung or earn subpar “market value” by the monopolized League of Legends ecosystem. If Riot Games is using their resources to obtain monetary gain from the esports component of League of Legends at the net detriment of the industry, then this is rent-seeking behavior.

Adam Smith classified three types of incomes streams: wages, profit, and rent. Wages are earned by workers in exchange for their labor, profit is earned by business through intense investments of capital, while rent is income earned through ownership alone. Rent-seeking behavior is an effort to earn a profit from ownership that actually exceeds the cost of ownership, thereby creating a net economic loss.

Most commonly, rent-seeking behavior can be seen in “special interest” lobbying groups. For example, a national association of sugar farmers could demand that foreign sugar be taxed or tariffed at ridiculous rates. Then, if legislators agree, competitive foreign suppliers will be eliminated, which will raise prices and create market inefficiency. Domestic farmers take complete market share and can raise prices above the previous market equilibrium. By using or abusing politics and the law, national sugar farmers help themselves while damaging the economy as a whole.

Is Riot abusing their intellectual property? Are Riot’s LCS, LCK, and LPL systems rent-seeking? And does the public statements of Merrill and other Riot employees reflect their actual policy positions?

According to several repeatable sources, the now-infamous pharmaceutical executive Martin Shkreli was highly interested in purchasing or creating a League of Legends professional team in the early months of 2015. His interest in the game and its esports component is quite the interesting intersection. Shkreli’s recent actions in the pharmaceutical industry are perhaps the best contemporary examples of how monopoly power and the legal system can be abused to generate exuberant profits in a modern economy.

In 2015, Shkreli founded Turing Pharmaceuticals with a simple business model: buy the patent rights for three highly necessary drugs and raise the prices on those drugs dramatically. In September 2015, Turing increased the price of Daraprim, which treats malaria and toxoplasmosis in AIDS infected populations, from $13.50 per pill to $750 per pill. This drug is often medically necessary and patent law prevents any other company from selling this same drug, giving Shkreli and Turing Pharmaceuticals an unfettered monopoly. Despite the public outcry at the injustice of such practices, it was completely legal and in the best interests of the company to do so.If anything, they could have charged more.

Riot Games owns the broadcasting rights to League of Legends, so like Shkreli, it controls much of the market surrounding it’s game. Unlike other developers, Riot has taken advantage of these legal rights, taking almost monopolistic control of upper end tournament play. They do not have to pay fair market rates for its casting talent because Riot Games does not operate the esports component of its business like a free market.

In CS:GO, Valve mostly allows individual tournament organizers to compensate teams, players, and broadcasting talent to create their events. The matching of buyers and sellers or laborers and employees creates “market value.” Organizers cannot force undercompensation as teams or talent can choose to not attend the event or attend an alternative. It is in an organizer’s best interest to compensate its partners according to their actual value of their participation. The attendance of certain teams could bring in sponsors or the presence of better broadcast talent can increase viewership, creating “value.” To compensate above that value creates a loss, to pay below value makes teams or talent want to seek fairer alternatives.

Now in a larger economic sense it is hard to say Riot has a “monopoly” as casting talent could always switch games or choose to exit the esports industry. The problem is that the skills needed to be a good League of Legends coach, player, or caster are only partially transferable to other areas of life or even other esports games. The discrepancy between in market value and out of market value allows a monopolistic Riot system to undercompensate. A caster worth $1000 in value per event in League of Legends may only be worth $500 per event in CS:GO, which allows Riot to pay its casters about $600 per event without fear of transfer. If there is no other employer in League of Legends other than Riot, that caster has no means of attaining his actual value.

But when the scene is already structured in this monopolistic fashion, is it really unfair that Riot, like Shkreli, are imposing wages and rates dramatically different from parallel markets? Is it wrong to maximize profits if those profits jeopardize a more general public good?

In the 1980s, Jack Welch of General Electric popularized the notion that the goal for any publically traded corporations should be to maximize shareholder value. From a shareholder maximizing perspective, Riot is encouraged to compensate owners and players in a way that maximizes shareholder value, not necessarily generating industry wide wealth.

If Riot operated with this perspective, even if research showed that the 2016 World Championship had to have a $2 million prize pool instead of a $1 million prize pool to best reflect the value provided by teams and players at the event, Riot could only increase its prize pool if that increase will add an equivalent or greater amount of value back to themselves through the form of marketing or goodwill.

Is a shareholder value maximizing perspective conducive to a healthy business environment? To what degree should individual actors pursue their own self-interest? Should profit be abandoned if it creates a net social negative or is all rent-seeking behavior justified if it maximizes shareholder value?

But Riot Games does not use this argument to justify its decision making in its esports operations. Riot frequently claims to makes decisions based on promoting a “healthy ecosystem.” For example, on Aug. 1, when they announced changes to interregional eligibility, they wrote, “We had to weigh the meaningful hardship that this change will cause several teams and players with the importance of preserving the future of an ecosystem that has a healthy balance of local and imported players —this was a tough choice that we did not make lightly.”

Since Merrill’s made his comments on Reddit, several former or current owners have written or insulated that running an LCS organization has become increasingly difficult financially. Several measures could be taken in order to increase the income streams of these organizations, whether that be increased stipends, revenue sharing, more prize money, shared revenue on in-game item sales, or several other measures.

But it is not in Riot’s best interest to do these things, and from Merrill’s comments, it seems that  Riot employees think the LCS system provides enough opportunities for funding already, “if [Reginald] is so concerned with the financial health of his players, maybe he should spend some more of the millions he made/makes from League of Legends instead of investing into other esports where he is losing money.”

By taking complete control over League of Legends esport almost exclusively, Riot Games has limited free market forces from teams, owners, players, and talent, in order maximize the marketing component of the competitive scene. It is completely within their right to do so, it is their intellectual property, and some might say they should do so in order to maximize the shareholder value of their publicly traded parent company, Tencent, but their rhetoric seems out of line with their actions.

How can Merrill or any other employee label or insulate certain owners as “good,” “bad,” or “greedy” when their own rent-seeking or profit-seeking behavior has allegedly stunted the profitability of the scene? How can the public be assured that Riot’s intentions are altruistic when their monopolistic system enables and even encourages Riot to underpay its fellow industry participants? And how will Riot address their apparent duplicity moving forwards?