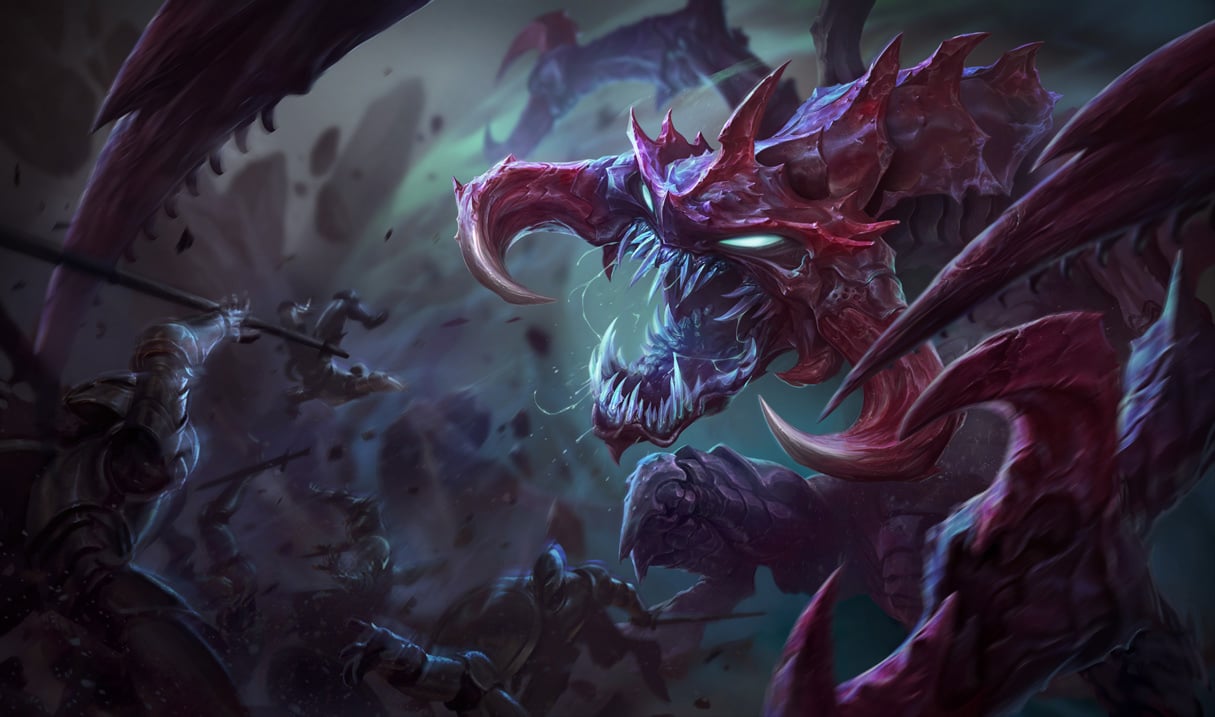 What has 12,000 health and can one-shot any ADC? That’s right, you guessed it—Cho’Gath.

Cho’Gath has been changed and buffed a ton over the course of this season, and he’s turned into quite the monster as a result. Between lower costs on abilities, a redesigned Vorpal Spikes, lower cooldowns, and flat-out more damage, it’s not hard to see why Cho’Gath is being played a ton more now than he was… ever, really. The biggest buff to Cho this year, however, wasn’t a change to him at all, it was a change to an item.

The Gargoyle Stoneplate was introduced in Patch 7.9 a few months ago, and it’s since become the go-to item for any team-fighting tank. It starts out with a meager 40 armor and 40 magic resist, but if you’re around at least three enemy champions, those are doubled to 80 each. There’s also an active ability on the item that temporarily boosts your health, and if you’re around at least three enemies, it actually doubles your health. Sounds pretty broken, right? Don’t worry, when you activate the item, it also lowers your damage output by 60 percent, so you’re not that OP. Well, except for Cho’Gath.

See, when you activate the item, it lowers all outgoing damage—except for true damage—so Cho’Gath’s ultimate ability, the one that deals upwards of 1,000 true damage to champions in the late game, is totally unhindered by the debuff. Actually, it makes it even more powerful, because his ultimate’s damage also scales from his health.

Not to mention, Cho’Gath can get up to around 8,000 health with Feast stacks by the end of the game. With Stoneplate, that becomes 16,000 health and one horrifying nightmare.

This interaction certainly doesn’t seem intended. Firstly, because it’s totally OP, and secondly, because it seems odd that the Stoneplate would lower all outgoing damage except for true damage. It seems like the design team almost forgot to include true damage in the effect, because the item’s tooltip doesn’t mention that it doesn’t affect true damage, it just says it “reduces the damage you deal by 60 percent for 4 seconds.”

Well, Riot thinks this interaction is totally balanced. More shockingly, it seems the item was designed to behave this way intentionally, according to Riot’s recent post on the official League of Legends forums.

According to Riot, Cho’Gath is very immobile and kite-able, so the fact that he can one-shot anyone that isn’t a tank is totally fair. That sentiment is incorrect when things like Flash exist in the game, because what counterplay is there to a Flash-ult from Cho? There is none. You die because of one ability in less than half of a second. But the company’s stance isn’t entirely wrong.

Cho has long cast times on his crowd control compared to other tanks, which makes him especially easy to mess with during team fights, so the likelihood of him getting to his targets to one-shot them in the middle of chaos is very low if the enemy team knows what they’re doing. The thing is, though, if he has 16,000 health, a ton of resistances, and an ultimate that deals that much true damage, you essentially cannot initiate a teamfight while the Stoneplate active is up. If any of your team gets close to him, they won’t be able to kill him and he’ll literally just eat them.

Most other tanks have windows of cooldowns and abilities to dodge, allowing room for the enemy to outplay them in the mess of a team fight. There’s always breathing room, and the way to outplay them will never be just to avoid them altogether, it’s to outsmart them. With Cho’Gath, though, things are different. Don’t get near him, and you won’t die.

This is a very unhealthy interaction, so hopefully Riot will change their stance on the matter soon, or at least give a little compromise.