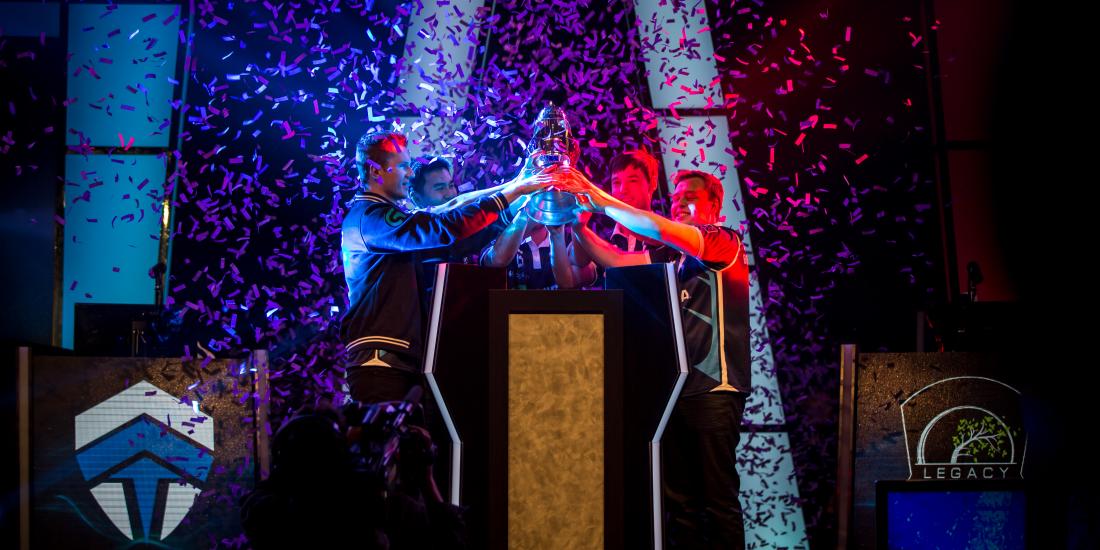 Dubbed Oceania’s titans, The Chiefs Esports Club quickly became famous throughout Oceania for their near-untouchable results ever since the team formed. To mark the start of the second OPL split, they returned with a roster change and another level of supremacy. Former Legacy superstar, Bryce ‘EGym’ Paule joined the squad, replacing Andrew ‘Rosey’ Rose.

Questions were raised about the unpredicted change. It was difficult to understand why the longest standing roster in the Oceanic scene, with a history of consistently admirable results, would make such a massive switch. However, The Chiefs silenced them with their untouchable record, improving on their impressive results from last split (13-1) in surreal fashion, failing to drop a single game throughout the regular season and semi-finals.

So what makes this current roster even stronger than the last?

An Added Threat in the Bot Lane – Introducing EGym

Rosey was definitely no pushover in the support role, however the addition of EGym gave a new  found aggression to the Chiefs’ bottom lane. Known for his Alistar, he flaunted his ability to transition into an aggressive support with an ability to dominate the lane phase. Able to seamlessly change his role allowed the Chiefs’ duo to adjust to differing enemy bottom laners and adapt to different scenarios with far more freedom. This meant that the directions they could take in the draft phase widened dramatically, having a firm grasp on lane swap scenarios and a range of support picks.

EGym was previously on the only team to ever defeat The Chiefs at a major LAN event. Under Legacy eSports, he showcased exactly why he deserved to be competing at Wildcards, drawing eyes to his Alistar play on the world stage —becoming a massive talking point on Reddit at the time.

The last time The Chiefs had the opportunity go overseas (under their former organisation at the time Team Immunity), plenty of well-known European players had positive words to say about the Australian duo, most notably Rekkless suggesting they were one of the best duo lanes he had played against at the time. Now with EGym in the place of Rosey, the pair is even stronger because of their lane dominance and ability to amass advantages heading into the mid-game. It could be argued that with the former Rosey passivity, Raydere was unable to play to his fullest and take the largest advantage possible from lane. Rosey’s passivity hindered Raydere’s ability to play to his fullest but since EGym’s acquisition, we are finally seeing more kills in the lane phase, in both 2v2s and in conjunction with ganks from Spookz.

This recent change of style in the bottom lane doesn’t just affect the bottom side though. Having a threat elsewhere on the map really allows Swiffer to come into his own as a mid-laner, giving him a lot of freedom to impact the map, as well as remove his opponent from the game. This split we’ve seen more aggressive moves out of Swiffer in lane phase, in addition to more initiatives with Spookz; forcing more 2v2 fights against the alternate middle-jungle combo as well as seizing opportunities to influence elsewhere on the map.

For the longest time, the Chiefs commonly defaulted to their go-to composition without hesitation. The original roster would opt for pick compositions, through the use of champions like Annie support and Twisted Fate. From there, they found a home in siege-focused line-ups, even bringing out a surprising support Ziggs in the 2014 Autumn Finals.  After falling short against Legacy, they surged back to their former selves. Delving almost entirely into team-fighting, they used their experience and history to their advantage against the rest of the teams in the competition.

This season is a different story as the squad has proven themselves through diversifying their drafting. Now, it’s hard to identify a preferred style out of The Chiefs, having consistent wins across the board with compositions ranging from team fighting and objective control, to split-pushing and scaling. The Chiefs are more flexible when it comes to drafting than ever heading into Wildcards. In comparison to previous international expeditions, they are more prepared to face unfamiliar opponents, able to adapt and react to whatever gets thrown at them.This isa very necessary step in tackling the ambiguous playstyles they are sure to face in Turkey.

Rather than focusing on counter-picking individual lanes, the team now has further ability to draft full team compositions that deal with alternative playstyles effectively. An obvious example of this would be Chiefs’ notable utilization of 4-1 split pushing in plenty of their games this split; with Swip3rR playing away from the rest of the team, drawing pressure and splitting the enemy team. This allowed the Chiefs to overcome team-fight oriented compositions or abuse lack of wave-clear in the enemy team.

Although unnoticeable locally, becoming more adaptive was probably the biggest step up for The Chiefs this year and one of the most important areas of improvement in preparation for IWC.

The Chiefs’ near-flawless objective control and ability to play the macro-game is nothing new to the informed viewer. However, The Chiefs have improved in both areas when compared to previous seasons. More barons, dragons, and vision control —the team has an even more commanding power over objectives and the game overall.

This improvement seems to stem from a more thorough understanding of their limits and capabilities at every stage of the game. One of the more notable examples of this is their ability to regularly attempt, and secure, dragons in early stages of the game, often only minutes in.. Similarly, their ability to take control of Baron vision and collapse on it to take it at unpredictably early times have caught a few teams off-guard, resulting in a massive lead entirely for free.

This is achieved through dominant and consistent warding. In addition to this, Chiefs compound on this through subtle actions that regularly go unnoticed to viewers and even sometimes their opponents. An example of this would be Chiefs’ deciding a time to poke their opponent down, committing resources if they have to. Even if they don’t send them back, which is what a lot of teams deem necessary to start a dragon early, Chiefs’ will immediately head to the pit after merely taking a player to half health, knowing that it’s a large enough advantage to have complete control over the objective. Taking the initial dragon is the first link of a regularly-occurring chain reaction where The Chiefs are able to maintain control of the dragon through the timer and plan out their moves accordingly.

Heading Back to the World Stage

Although it’s been quite the hiatus, The Chiefs finally have the opportunity to make strides in an international setting not unlike their previous appearances at Wildcards and the World Cyber Games in 2013 and this year’s first IWC tournament.

At their last appearance in Turkey, the now-Chiefs flaunted compelling results in their first two games. Up against Lyon first, they showcased their ability to adjust, counteracting Lyon’s 2v1 middle lane with a fast rotation along with gank pressure. In Game 2 against a rival they will be meeting yet again this year, Dark Passage, they destructively took the victory with a 16 kill (21-5) differential at 30:00.

When the 2013 World Cyber Games rolled around, The Chiefs (then-Immunity) earned their right to represent Australia against some of the best teams from around the world. Just some of the names attending for their respective countries included reputable Chinese teams, World Elite and OMG, as well as Korean superstars, CJ Blaze.

An unfortunate start to the Group Stage left the Australian hopefuls in a do-or-die match against one of the world’s best teams at the time, Blaze. Most people considered the game a complete write-off.

How could a team virtually unknown to the world stage hope to contend with some of the greatest players in the world?

Whether it was being backed against the wall or having nothing to lose, Immunity were seemingly undeterred by what stood in front of them, running their typical invasive style right from the beginning.

Spookz was the first member to take the fight to the Koreans, finding DayDream in his jungle and flashing onto him unrelenting for first blood. Returning to the middle lane and catching DayDream and Ambition for a counter-gank, Immunity’s first kill was quickly followed by two more. Swiffer and Spookz surged further ahead, finding more kills on their respective opponents until they had constructed a 5 kill lead by 9:30, to their own surprise. Slowly but surely though, CJ Blaze began to retake control and pull ahead in the later stages of the game. Unfortunately not being able to close out the game, The Chiefs were knocked out of the tournament then and there. Leaving with smiles of disbelief, they knew they had not only surprised everyone watching but had left their names echoing throughout the convention centre.

This year, still under their former roster at the time, The Chiefs’ beginning to IWC was no different to their previous international escapades. Kicking off the round-robin stage with a 2-1 record on Day 1, it finally looked as if the team could finally break through the group stage for the first time. It was unfortunately short-lived as the Aussies went on to have 1-2 and 1-1 records respectively on the days to follow, narrowly missing out on the finals stage.

Heading into their third International Wildcard Tournament, The Chiefs are one of the most internationally experienced teams in the competition, only rivalled in that field by Dark Passage. Despite their impressive overseas showings so far, The Chiefs have never been able to seal the deal and move on through the qualifiers.

This year is a different story though. A revamped roster and an advanced skill-set brings an intimidatingly new Chiefs into fruition. Australia’s household team finally have the tools necessary to succeed at Wildcards.

Zeror is an Oceanic eSports journalist and avid writer who hails from Perth, Western Australia. Although constructing mostly League of Legends and Call of Duty content, Blake has an undying passion for all eSports, particularly FPS titles.

In addition to writing, Blake also currently competes in the Dirty Bomb Pro Series, as well as works in Social Media and PR for Australia’s Pro LAN Circuit, ACL.