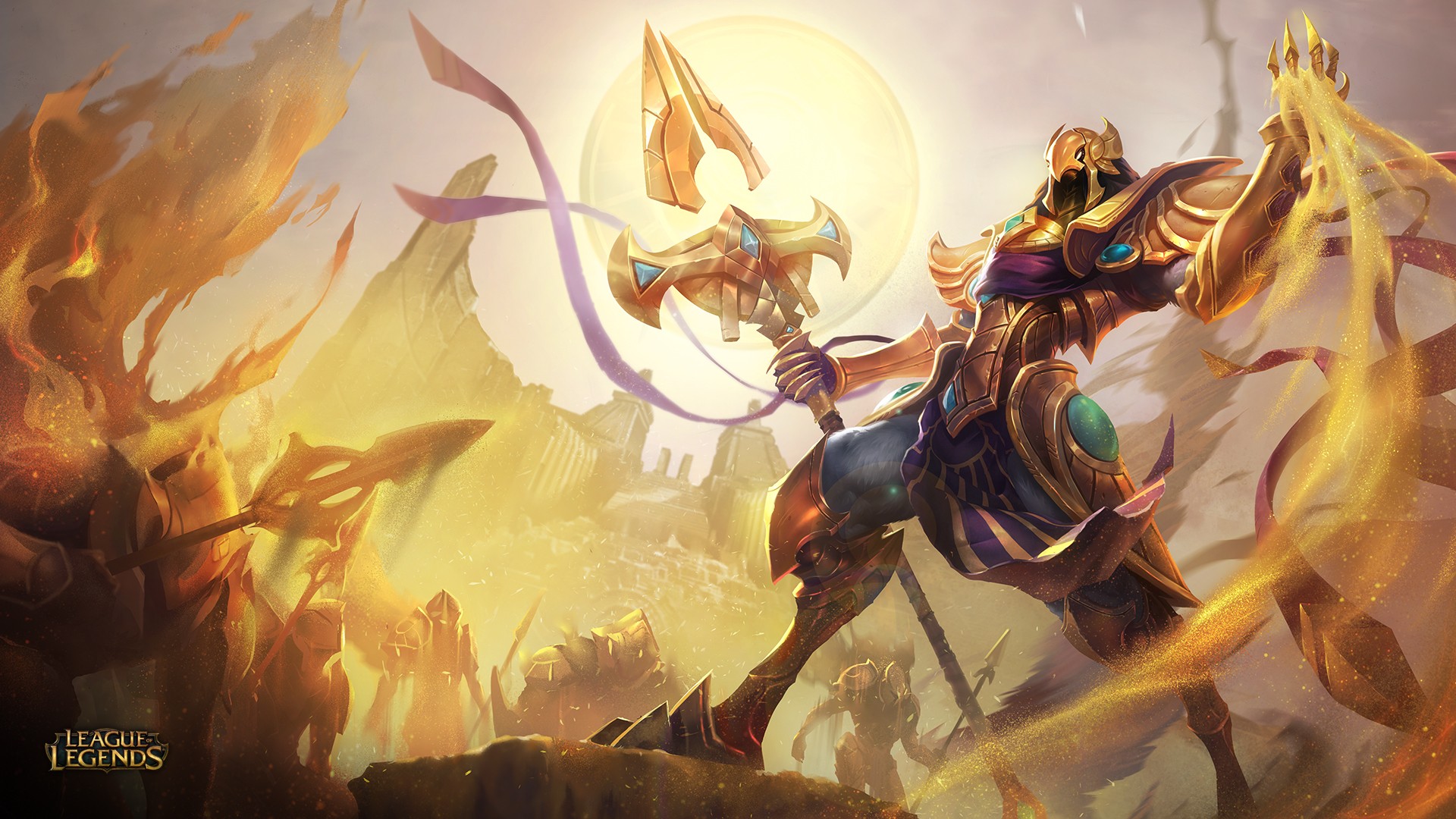 Surrenderat20’s PBE update has indicated that Riot plans on nerfing the popular mid laner Azir. One PBE patch removed both the shield and knock-up on his e (Shifting Sands), a spell that allows him to jump towards one of his sand soldiers. The latest PBE update has reverted the shield change but retains the knock-up removal. It’s difficult to predict the results of balance changes, but it seems like this change to Azir’s utility and playmaking will have a substantial impact on his perfromance.

On one level, it makes sense for Azir nerfs to come. The king of Shurima has been popular in competitive play ever since his release. In the Summer Split, Azir has been the most popular mid laner in all regions, being played a total of 103 times. In addition, Azir has a very high pick or ban rate. Azir has been picked or banned in 73% of games, 6th highest in the world and again number 1 for mid laners. Azir has been nearly as popular in solo queue play. He is the second most popular mid lane champion, behind only Ahri.

However, a look at win rates suggests that these changes are too heavy-handed. While this article will mostly focus on Azir’s nerf and what it means for competitive play, it’s important to note that Azir has only a 45.94% win rate in solo queue play, suggesting that Azir balance for the sake of solo queue is unneeded. That being said, experienced Azir players with over 50 games played have a 52% win rate, and Azir experts with over 125 games played have a 55% win rate. It’s possible that Riot is hoping to address the strong performance from these veteran Azir players, but it seems like mastering a champion should be rewarded rather than punished.

In competitive play, Azir has a 50.5% win rate. Although Azir is clearly regarded as a strong pick, he is nowhere near gamebreaking – commonly picked champions like Gragas, Kalista, and Sivir all have win rates above 56%. In comparison, the team that picks Azir has a roughly even chance of winning the game. If Riot is hoping to balance Azir in competitive play, they are late to the party. Pro players have already identified the weaknesses of Azir and devised the appropriate counters. This article will use the example of Azir to discuss how some balance changes are unneeded because of player-driven innovations which organically balance champions without outside intervention. The two players this article focuses on, PowerofEvil and Keane, are some of the most obvious innovators in Western LoL and demonstrate different aspects of how to counter meta champions.

Trading card games (TCGs) have some key similarities to patch e-sports. TCGs will often introduce new sets or shake up the metagame with ban list changes. New sets introduce new cards to the game and ban lists restrict the number of cards a player can use in a deck. New sets are similar to the introduction of new champions, and the ban list works in a way similar to balance changes by nerfing certain decktypes. Changes such as a ban list or nerfs are artificial balance changes – the game designers are stepping in to address an imbalance in the game’s power structure.

However, there are also ways for players themselves to address balance changes, by adjusting their strategies to introduce counters to the current popular options. The first of the two most prominent counter-strategies is the use of tech cards. Tech cards are cards which fit into the goals of a meta deck while countering the most popular cards. Rather than devoting the entire deck to countering the meta, the deck still focuses on the same strategies as the most popular decks, but features some one-of counters. One example of a tech card in Hearthstone would be the use of Harrison Jones in a metagame which heavily emphasizes weapons.

The champion selections of Unicorns of Love mid laner PowerofEvil strongly resemble tech. PowerofEvil’s signature innovations counter the meta-game while still retaining the same playstyle as the meta champions. The current metagame places a heavy emphasis on poke/DPS mid laners. The three most popular selections worldwide are Azir, Viktor, and Cassiopeia. These champions boast relatively strong range and are able to easily harass opponents out of lane with their range advantage. PowerofEvil has countered these champions by innovating picks which can out-range these champions in the laning phase and out-damage them in the late game.

The picks PowerofEvil has been best known for innovating this season are Varus and Kog’Maw. Perhaps as an indication of how strong they are against the meta, Varus boasts a 57.4% win rate after 47 games. AP Kog’Maw boasts a 70.6% win rate, but only in 17 tries. Both of these champions boast key traits which allow them to counter the meta. Varus is able to use his AD to poke and bully his opponents out of lane. On the other hand, Kog is able to farm safely against the meta picks, particularly Azir, while getting what is effectively a free lane to scale into the late game. Most importantly, these champions play the same role as the popular meta picks. Both Varus and AP Kog’Maw are high DPS poke champions, so they fit seamlessly into the current meta compositions. Although his own team didn’t follow the meta, teams which want to play conventional strategies have profited from PoE’s innovations. Teams which pick Varus and Kog’Maw do not have to adjust their strategies to accomodate these champions. Because of this, PowerofEvil’s tech picks have caught on and teams around the world are now playing these champions.

Whereas PowerofEvil has popularized strategies which counter the meta while still fitting into common competitive team comps, Keane’s picks which require a much higher level of team-wide devotion. Power of Evil’s picks fit into the meta because they were still poke/DPS champions. Rather than fighting fire with fire, Keane has decided to counter poke with hard engage. These strategies have been effective – Gravity is currently sitting on top of the NA LCS and teams have seemingly little to no idea how to deal with their strategies. Other than Orianna (who can still engage with her ult) Keane has exclusively played engage champions in the mid lane, with his most favored picks being Urgot and Jarvan the Fourth.

Because Keane is not playing the standard meta champions, Gravity has had to change their team dynamic. Because Keane’s champions do not deal as much damage as the meta picks, top laner Hauntzer and AD Carry Altec both have shifted into damage-oriented carry roles. In addition, support BunnyFuFuu has favored the off-meta Shen, a champion who can support his teams dives from anywhere on the map. Gravity’s dramatic team transformation resembles the second popular counter strategy seen in TCGs – the anti-meta deck. Whereas tech cards are cards which counter the meta while complementing the deck’s main strategy, an anti-meta deck is a deck whose entire purpose is to counter the most popular strategies. Anti-meta decks rely on capitalizing on the main weakness of the popular meta decks. Often, anti-meta decks are weak against decks other than the one they were built to counter. One example of a anti-meta deck in Hearthstone was this Warlock OTK deck. At the time, the most popular deck was Miracle Rogue, a deck which centered around stalling in the early game to draw into a one-turn-kill strategy later on in the game. This Warlock OTK deck was able to kill Miracle Rogue before the deck reached its power point. Against other matchups however, Miracle Rogue remained a superior strategy because there the benefits of a reliable one-turn-kill was better than the faster, but more inconsistent, Warlock OTK.

Similarly, Gravity’s team comps are designed to beat out the current meta-game by taking advantage of their weaknesses. In a sustained fight, the current mid laners and AD Carries are able to rack up massive damage scores do to their DPS. Gravity’s team comps are focused on killing their opponents before they can respond, thereby nullifying the long-term damage threat. In MOBAs, anti-meta team compositions have an additional risk – bans. A well-placed ban could nullify a team’s anti-meta team composition by removing key champions. Consequently, most teams either don’t play anti-meta compositions or save them only for the most drastic circumstances. (EDG’s infamous anti-LeBlanc comp against SKT.) However, GV has been able to consistently play anti-meta compositions because Keane has shown proficiency on a wide array of all-in champions (8 different champions in 12 games this season.) Partially because other mid laners don’t have this breadth of champion knowledge and partially because it probably isn’t optimal for teams that already have mid-centric strategies to dramatically restructure their carry priorities, Keane’s anti-meta strategies have not caught on in the rest of the world.

Nerfs, buffs, and reworks are all important tools for game to use to balance gameplay. However, its important not to change already balanced game aspects due to potential damaging ripple effects. In solo queue play, Azir is a below-average performer. Only experienced Azir players are able to boast a positive win rate on the champion. If Riot is aiming the curb the strong play of these players, perhaps the Azir nerfs are justified. However, if Azir’s nerf is directed towards competitive play, it seems like Riot’s good intentions are somewhat misplaced. Players have already balanced Azir with player-driven balance tactics. PowerofEvil showed teams how they could counter Azir’s range and poke by teching champions with superior range and damage into their team compositions such as Kog’Maw and Varus. Although other teams have been slow to pick up on Keane’s innovations, his use of all-in champions to burst down Azir and nullify is damage has also been a suitable counter.

Azir’s popularity remains a fair reason to rebalance the champion, but his even win rate and the innovations we’ve seen to counter him stand as strong reasons for keeping him as-is. The strategies players have developed to balance Azir themselves are interesting and exciting. If it’s not broken, perhaps there’s no need to fix it.