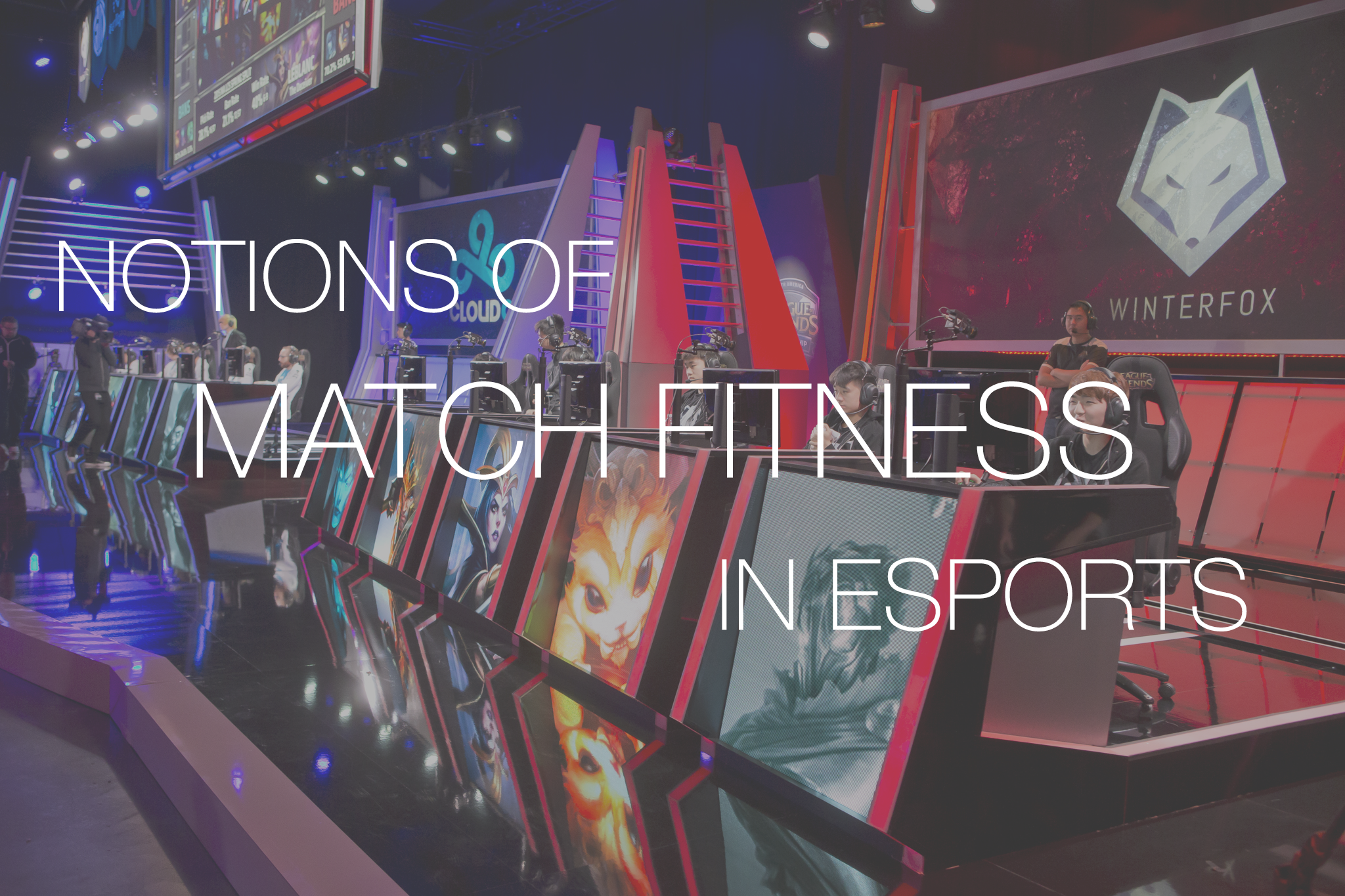 Preface: Thank you, reader, for clicking my link and starting an unintelligent adventure into my words, but I must warn you this post will be very much blog-like and rambly. It’ll draw on my previous experiences, and more importantly, my often outlandish opinions on just about everything.

If you do not appreciate the sound of that, avert your eyes.

Recently, I heard a comment made by an Australia CS:GO player of Team Immunity, Snyper, mention that his squad struggled internationally or something along those lines. His cited reasoning was not because they weren’t good enough, nor were they underprepared with strategies or executes. He raised, to my understanding anyway, the idea of a team’s ‘match fitness’ — obviously insinuating Team Immunity was not ‘match fit’.

I come from a traditional sports background, specifically tennis. If any of you are familiar with tennis, elite players often comment on both mental and physical fitness required to play at a professional level. You need only think about one of the epic finals of a Slam that went for four or five hours, or even the Isner-Mahut match in 2010 that went for 11 hours! Players and athletes who are by all definitions incredibly fit, won’t proclaim they’re ‘match fit’ until they’ve actually started their intensive training routines and practice sets, and even until they actually enter a tournament setting.

Match fitness, unlike regular fitness, is what separates the talented from the unbelievable. It’s that final edge that reminds you why they’re out playing, and why you’re enjoying as a spectator. It’s that level of fitness that allows you to play at this extreme level for four hours straight, have one day’s rest and back it up in the next round.

So, here is where it gets interesting. Match fitness, as I somewhat mentioned earlier, doesn’t only apply to physical strength, endurance, or stamina. I believe it also very much applies to mental strength, resilience, and fortitude. Sticking to tennis, a player has to keep a positive frame of mind after losing a 30-shot rally, or after a double fault. If he or she has their serve broken, they need to introspect on the fly and adjust their game. Even worse, a player has dropped his first two sets and needs to find the courage to go on, as well as the physical fitness to play another 3 hours to earn their victory.

This is match fitness.

When a player is at their peak form, physically and mentally, and ready for competition. Now, to redirect this back to the original paraphrasing of Snyper, I interpreted his experience to mean that although they had scrimmed against teams back home, and run strategies that were a surefire success against weaker foe, it didn’t dent the armour of stronger teams from around the globe. They were feeling alright heading into the competition, but didn’t have that edge.

Another easy comparison to make is looking at LCS or LCK teams, or even more appropriately, LPL teams. Teams often start off with mixed success, but generally take a few weeks or matches to find their stride. Maybe their scrim partners were vulnerable to something in practice they were capable of handling under the gun. Maybe the lack of pressure influences the ease of execution — maybe both.

Another (funnier) comparison to make is when people hilariously talk about translating scrim performance onto the stage. How they’ve “been doing so well in scrims” or that “if only they could translate scrim performance” are common excuses or explanations about poor results. Although it is bordering on meme territory, it certainly does hold an amount of truth. Maybe not match altering performance every time it is raised, but a certain influence on play is very often tangible.

To me, this once again comes down to match fitness. The issue does not necessarily have a black and white solution, however. I won’t pretend I have all of the answers, but I will comment on my personal experiences with this phenomenon with the team I currently coach, the Chiefs Esports Club. The ideation of reaching match fitness is a fickle thing, and very hard to analyse. In my opinion, it is something that can’t really pass the eye-test, it’s an underlying concept that is felt rather than seen. When my team is on point, it looks effortless. Their communication is astute and purposeful, their decision making is quick and proactive, and their in-game mechanics or micro are precise and exact. It’s the meshing of all of these little things, when a team is on top of their game.

Match fitness lacks a recipe. Finding it, too, is often a hard process. Or so it feels that way. The issue comes down to scrim culture and practice efficacy. For the Chiefs, we aim to play five nights a week and hope to get four or five hours each night of scrims. The sad reality is teams often quit the blocks early, players lag, someone needs to use a substitute, or teams aren’t taking their practice seriously. This isn’t me attacking specific teams or calling them out, this is just addressing an issue that’s close to home. I recently commented in a vlog that we found it hard to get good practice in Australia, prior to attending the International Wildcard Qualifiers. Many teams weren’t playing, others weren’t very competitive, which was on top of teams still stopping after one or two games. Thankfully, a lot of this was rectified when we played against teams from the Challenger Series and LCS over in our bootcamp, and we almost automatically felt like we were on the backfoot. The level difference of practice — not just skill, but the preparation they put into scrims, the timeliness in their manner and punctuality, the effort level they gave to each scrim, even down to teams being very open to when a game was over and surrendering to not waste time.

And still, we fell short to the Bangkok Titans. For me, it wasn’t that we couldn’t necessarily translate our scrim performance to the big stage, it was that our scrim ‘performance’ domestically was all but irrelevant when it mattered. Beating teams with two substitutes or pausing intermittently isn’t practice. Drafting against a team that has someone playing Hearthstone isn’t challenging. Playing one and a half games instead of a best of five doesn’t help us become ‘match fit’.

Sadly, issues of match fitness are not only isolated to Wildcard regions, and they’re not only prevalent in practice. Ultimately, every competitor has their sights set on winning. Their playoffs, their finals, but most importantly, World Championships. Currently, to win the League of Legends World Championship, you need to play six best of ones, and come within the top two out of four places in your group. From there, you need to win three consecutive best of fives to take away the cup. The takeaway message placing the most weighting on the best of five series, where the majority of your games will be played.

Currently, the most popular leagues in the World would arguably be the EU and NA LCS. While they certainly are not the strongest leagues, they do draw a lot of the public eye. Maybe the sheer number of China’s population eclipses that of the LCS, however, the point stands. I won’t heavily buy into the LCS format debate, you’ve all heard it. On top of that, you most likely already agree that a best of two/three format is much more robust and fair. Again, it also has the most practicality in terms of what we’re all fighting for. The phrase “best of none” feels all but too appropriate here. If the only thing standing between your team and a Championship title is a best of five, your regular season best of ones will hold little weight in terms of relevancy.

Match fitness, the drive that will take you over the line in Game 5, isn’t going to be sourced from best of ones or bad scrim practices. This isn’t a plea or wakeup call to teams, this is simply my observations and analysis on the matter. But it should not be surprising to anyone when teams from the Eastern regions, where everybody has currently amalgamated to for their final bootcamps, continue to excel — it should just become expected at this point.