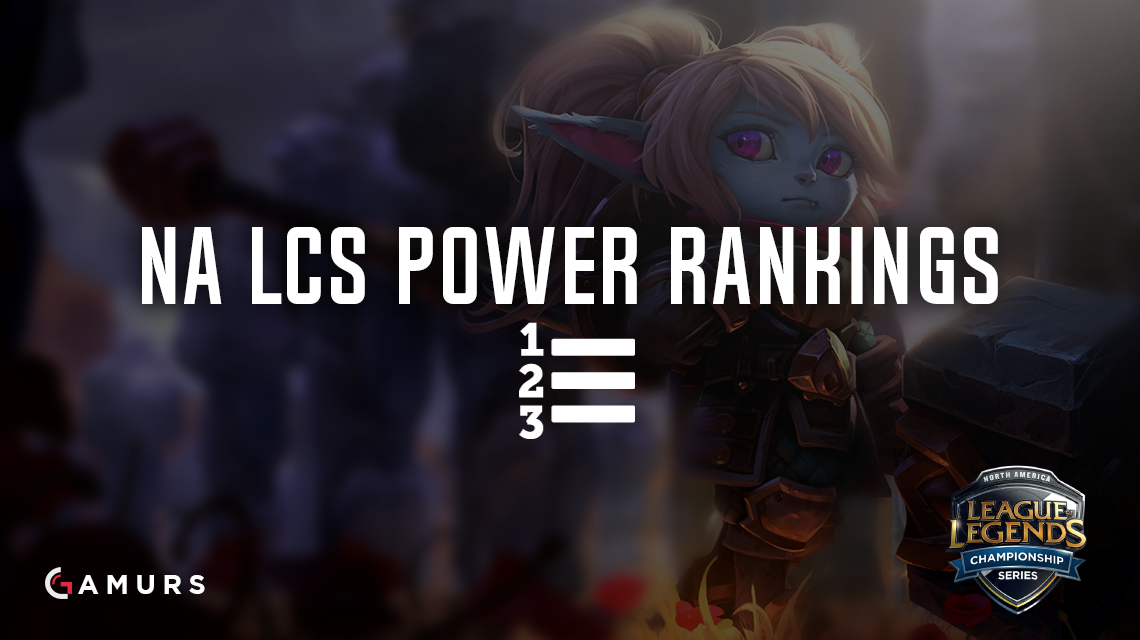 Week two of the North American League Championship series has come to a close, and the parity in this league is currently very apparent. Let’s just see how long it lasts. After a perfect week one, Cloud9 repeated the performance in week two, while FlyQuest took its first series loss. Dignitas fell, Phoenix1 rose, Echo Fox won games… like I said, parity. An updated version of GAMURS’s NA LCS power rankings is here, and the list once again looks a little different than it did last week.

Without further ado, here are the Feb. 2 power rankings for the 2017 NA LCS spring split, starting from No. 10.

Team EnVyUs’s performances so far make this team our unanimous last place pick. In the first week of play, they lost four relatively close games against FlyQuest and Counter Logic Gaming, resulting in two sweeps, but they were without LirA due to visa issues. Fans had hope for this week, but the team actually looks like it is in a worse place now that the players have to figure out how to adjust with LirA back in the starting position. Phoenix1 crushed EnVyUs 2-0, and aside from a decent game one, Immortals crushed them as well. This team does not look great, and they have a lot of adjusting to do.

This week, the squad takes on Team Liquid and Cloud9. Liquid offers a slight chance at redemption, as the team has had a slow start. EnVyUs could finally pull out a win in that series. It’s not extremely likely, but it could definitely happen. Against Cloud9, to put it bluntly, there is no hope. Cloud9 has looked like the best team in the league for two weeks, and EnVyUs has looked like the worst team in the league. At best, EnVyUs goes 1-1 this week and gets on the right track. At worst, they lose to Liquid and fans begin to sweat immensely.

Despite only losing to two seemingly very good teams last week, Liquid has dropped significantly in our rankings. As the author, I think this drop is a little extreme, but that’s the beauty of staff input. Regardless, Liquid fell last week to two pretty solid Team SoloMid and Phoenix1 squads, and did not look very good in the process. Week one gave fans slight hope, and week two ripped it away. Liquid is off to a shaky start, with most of the blame seemingly going toward Lourlo and Goldenglue, though Reignover’s style of play in this meta is also being called into question.

This week, Liquid faces Team EnVyUs and Echo Fox. The series against EnVyUs is the closest to a guaranteed win that any team could come across right now, so a loss there will be completely demoralizing for this squad. Based on week one performances from both teams, Liquid can beat Echo Fox as well. Based on week two, however, Echo Fox should stomp Liquid. It all depends on which team shows up on the rift. Since Goldenglue is being so heavily questioned, we may finally see Link make his return to the LCS this week, and sometimes, one player swap can make all the difference.

Immortals, ever-stagnant and maybe even worse between weeks one and two, is a team that does not look great. The lost sweep to Cloud9 was no surprise, but the tight series against EnVyUs was extremely worrying. In the end, Dardoch did what he does best and carried the team to victory, but he will not be able to do that against better teams. This squad has an obvious lack of synergy and is struggling in the new meta, and the players need to quickly adapt or they will be in a bad place when the end of the split comes around.

The road does not get any easier this week, as Immortals face off against Phoenix1 and FlyQuest. Phoenix1 is looking like one of the stronger teams in the NA LCS, and Dardoch won’t be able to steamroll Inori and his laners. FlyQuest, despite suffering a loss last week, seems to be a strong team as well, and shot calling from Hai should easily take down Immortals. This team is in for a rough week, unless the players went through a miraculous evolution in the past few days.

Counter Logic Gaming had a pretty tough week two, and looked inconsistent. The team was absolutely stomped by FlyQuest, but actually put up an incredible fight against league-leading Cloud9. Due to inconsistency, and leaning toward more bad performances than good ones, CLG stays low in our rankings. We all know this team’s potential based off of the series against Cloud9 and what we’ve seen from this roster in previous splits, but they aren’t quite meeting the mark.

This week gives CLG a chance to prove themselves and show that the series against Cloud9 was no fluke, as Team SoloMid and Team Dignitas stand in CLG’s path. These squads both look strong, so the average viewer would predict a 0-2 week for CLG. Knowing the way this team works, though, typically playing to the level of its opponent, CLG could walk away with a perfect week.

Echo Fox completely flipped the script on us last week, as the team went from reactive to proactive and won two series against very good teams. Froggen looks like a monster in the mid lane again, Akaadian is the front runner for rookie of the split, and the rest of the team looked good last week too. The question, is whether or not they can keep it up.

This week, against Team Liquid and Cloud9, Echo Fox can at least cement its place as a mid table team. Beating Liquid is expected at this point if this team keeps up its current form. Cloud9 is the consensus best team in the league right now, so a win or a close series against them would make Echo Fox’s stock soar. It’s entirely possible, however, that Echo Fox comes back down to Earth and fails to perform as well this week.

Because of the 0-2 week, Dignitas dropped three spots down to our initial ranking for the team. Still, No. 5 isn’t all that bad. The losses were close, against two good looking teams, and it would not be at all surprising to see Dignitas bounce back this week with a 2-0 performance.

FlyQuest and Counter Logic Gaming stand between Dignitas and a return to good form, and FlyQuest offers the most resistance. Behind Moon’s play in the jungle and Hai’s shot calling in the mid lane, FlyQuest looks like quite the intimidating team right now. Against Dignitas’s struggling communication, FlyQuest could shine. CLG, unless they continue their newly found form, should fall to Dignitas relatively easily.

FlyQuest dominated CLG this week, and held a close series against a vastly improved Echo Fox. Yes, they lost to Echo Fox, and they are still ranked above Echo Fox. Sue us. If these two teams played again this week, we’re confident that FlyQuest would win the series. The biggest weak point on FlyQuest is Balls, and the loss to Echo Fox was mainly due to the team’s newfound aggressive and proactive style of play. FlyQuest was not ready for it, and could not adapt quickly enough within the series, but likely would have been prepared had Echo Fox shown that form in week one.

This week, Hai’s guys take on Dignitas and Immortals. The series against Dignitas should be a fun one to watch, and either team could come out on top. If Dignitas returns to the form they were in week one, they should take the series. If FlyQuest stays consistent and Dignitas continues to slow, the series is theirs. Against Immortals, don’t expect FlyQuest to struggle. Dardoch is carrying Immortals single-handedly right now, and you cannot do that when you play against Hai, especially when he has a confident jungler at his side.

Phoenix1 does not have the most impressive resumé so far, but at least the team is consistently winning and looking good doing it. With a week one win over Echo Fox and week two wins over EnVyUs and Liquid, Phoenix1 has only lost to Dignitas so far. Though the team has looked strong in all four series, they did fail the only tough test they have had so far.

Team SoloMid started slow in week one, but kicked it into gear in week two. Every player seemed to return to last season’s form, or at least get very close. Aside from a weak game two against Liquid, TSM looked impressive. Based on last split, we know this team has potential. They may be reaching that potential soon.

TSM takes on Counter Logic Gaming and Phoenix1 this week. CLG, unless their upward trend is increased exponentially, should fall to TSM relatively smoothly. Phoenix1 will provide a good test for this lineup, as they are one of the other top teams in the league right now. If Bjergsen and company go 2-0 this week, the future looks bright for TSM fans.

Unanimously in first place, Cloud9 is the best team in the NA LCS right now without a doubt. Immortals put up no fight at all last week, while Counter Logic Gaming almost knocked the giants down. Impact and Jensen are so strong in lane that Contractz’s job in the jungle is much easier than it would be if he were on a different team. No NA LCS team can match Cloud9’s solo laners, and with a confident jungler and a powerful duo lane, it isn’t likely that this team will lose any time soon.

This week, Cloud9 takes on Team EnVyUs and Echo Fox. The series against EnVyUs should be a clean sweep, but Echo Fox could pose a problem. If Akaadian and crew can knock Contractz off his game early and make him uncomfortable, this could be a good series. Expect Cloud9 to walk away on top, but it may not be easy.

What do you think about our power rankings for this week? Are there any teams that you would rank higher or lower? Let us know by commenting below or tweeting us @GAMURScom.