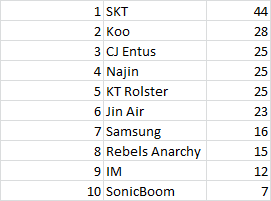 It’s a new horizon for LCS and after many a plea from players and fans, its format is changing. Riot announced changes to the EU and NA LCS (click here if you live in a cave and didn’t know about that) that will be going live on summer split, so the first split of Season 6 will still run as usual but in the next split, things are going to change.

“But, what are these changes?” One may ask. Well, thankfully Riot was nice enough to write a big ass post explaining the Why’s, Pros and Cons, and all of that. But I’m just going to do a TL;DR version of it: NA LCS will be played in a Bo3’s format. EU LCS will play in a Bo2’s format.

So, if you read carefully the title of this post you know I’ll be talking about EU LCS from now on.

The best of two format

Personally, my favorite format for League of Legends championships. I’ll explain that later on, but let’s take a look at what really means to play a best of two.

A Bo1 is a one chance match. If you screw up and lose the game, it’s lost. You don’t get to try and turn it.

A Bo3 is a two chances match. If you screw up, you have another game do adapt, and you can turn the series, but you’ll always have a winner.

A Bo2 is the only format that allows for ties. And that’s what I really like about it. It gives you one and a half chance. If you screw up and lose the first game, you can still adapt and win the next one, but at the cost of a tie. You get punished for losing, but also rewarded for getting back on your feet.

And why is that so awesome? Let’s take for example week three from LCK 2015 Regular Split. SKT T1 played against Samsumg Galaxy.

Samsung is far from being a bad team, but they were facing what came to be the best team in the world this year. They managed to take a game out of SKT, but it meant nothing on placements.

If it was a Bo2, it would have been a tie. So, let’s do some dreaming and change LCK a bit. If every game that wasn’t a 2-0 swipe was a tie, this is how the LCK standings would look like:

The same teams would have qualified to playoffs, but in a different way.

With a threeway-tiebreaker to decide the gauntlet (there would be plenty of time to play that, with one game less every match). So, the championship changes a little bit. Koo would be second place on LCK, but the games they took away from other teams in the Bo3’s didn’t count.

Now, let’s get out of my imaginary LCK and go for one of the Leagues that is actually played in the Bo2’s format.

The CBLOL and the Best of Two format

So, the Best of two is pretty simple to understand. Win = 3 points. Tie = 1 point each. Lose = No points. But how does this format affect the championship in a greater level? Well, at least for the second split of CBLOL, it made it a lot more interesting.

CBLOL has 8 teams and it was played along 7 weeks, with every team facing each other once in a best of two and I got to say, it was thrilling to watch it. Even if the level of play on Brazil is lower than the strongest regions, it was an awesome championship. Small teams taking games from bigger teams and forcing ties led to a completely open week 7 (the last week of group stage).

On the 7th week, every team that was on bottom half of the table had chances of going down, including Kabum, that was by all means, a strong team at the region. A newcomer team, INTZ Red, the sister team of INTZ, forced a tie in their last game. Kabum was relegated, INTZ Red made to the quarter-finals. This situation was close and was exciting. It was entertaining to watch. Best of ones are entertaining but don’t give any chance to the loser. Best of three’s give a chance but gives no reward for winning a game if you lost the series. Best of twos provide all of that.

For me, Bo2’s are the best for group stages. And Bo5’s for the finals, but I won’t talk about that right now. But these are not the only benefits of Bo2’s.

In a best of two, doesn’t matter how the games go, there will only be two games. Why is that important? It’s easier to schedule games. If I’m playing a Bo2 and I’ll give one hour for each game I’m pretty sure that in two hours the games are already over or, at least, close to ending. So if I schedule a match for 2 hours after the first one, it’s likely to be on time.

In a Bo3, if I give one hour for each game I have to schedule the next match to 3 hours later because there might be a game going on still if the teams are 1-1. But hey, if a team goes 2-0 then I have a choice. To start the next game right away (screwing fans that programmed themselves to watch the next match in three hours) or I wait one hour before the next match begins (screwing the fans that will have sit and listen for one hour of phreak’s jokes). Is that a huge problem? Not at all, but Bo2’s are more predictable timewise.

I hope you enjoyed the read and if you want to reach me, hit me up on  twitter (@thypedroftw) or in the comments section below.