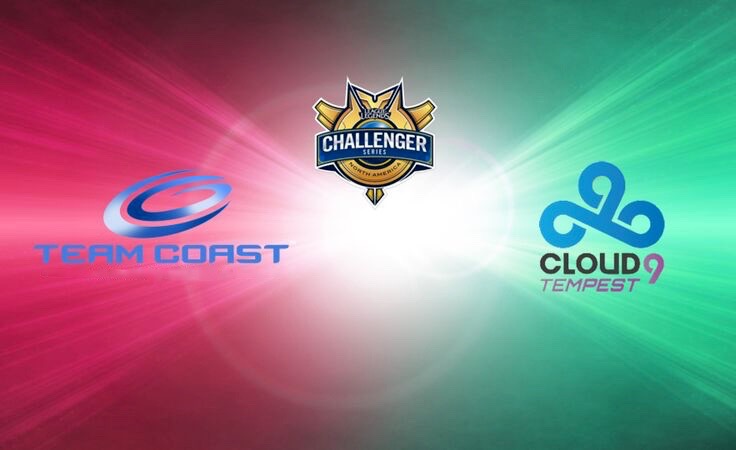 After a disappointing LCS spring split where the team was auto-relegated with a 1-17 record, Team Coast planned for the North American Challenger Series (NACS) by announcing former pro-player Saintvicious as head coach. The organization also had a minor roster shuffle replacing Mancloud and WTHeaven with NA challenger midlaner Pekin Woof and the relatively unknown Korean solo queue jungler Shrimp. Due to the uninspiring roster moves at the time, most believed the team would not find much success with the likes of fan favorite Renegades and the promising Cloud 9 Tempest in the competition. But the team in blue proved otherwise.

Led by Saintvicious, Team Coast enjoyed an immaculate run in the North American Challenger Series by placing first and dropping only 2 of their 11 games, showing little weakness to their gameplay.

Going into the playoffs, Team Coast is the team to beat.

Cloud9 Tempest is the only team set to compete in the playoffs with a full North American line up. The current team consists of Top laner Solo, Jungler Hard, Midlaner Yusui, ADC Lod, and former Team Coast Support Sheep. This team (sans Sheep) was set to compete in last split’s Challenger Series, but were disqualified from participating after it was revealed that the team had used a player outside of their listed roster during the final matches in the qualifiers. The team would wait until summer to have a second attempt at qualifying for the NACS.

Further controversy occurred, however, as midlaner Yusui was temporarily banned for four weeks for purchasing several dozen botted accounts. However, the club successfully qualified for the NACS after winning the final round versus CLG Black with substitute midlaner Jintae.

Cloud9 Tempest was among the favorites to perform this split, with young talents Yusui and Hard leading the charge. However, the team endured a tumultuous split with poor performances due to visa issues preventing the team from moving into a gaming house, minimal on-hand coaching, and internet issues. It was not until the final weeks of the NACS that Cloud9’s management moved their challenger team into their team house for a bootcamp. The move did not have an immediate impact though, as the team still had an underwhelming 4th place finish with a 5-5 record.

Note: Team Coast played an extra game due to a tie-breaker

Cris is infamously known and criticized for his poor performances with Team Coast last split, and many asked if the top laner was even good enough to be in the challenger series. Cris responded to his critics with solid play and a number of carry performances. Statistically, Cris is currently the best top laner in the NACS dealing the highest damage per minute (488 damage, 183 damage above average) and playing a huge part of his team’s damage (24.8%) from his role. Additionally, Cris regularly accrues a good gold lead at 10 minutes (+189 gold), which helps him snowball uncontrollably when he plays carry tops like Ekko and Ryze. Cris might be a low tier LCS top laner, but in the NACS, he is the best.

Cris’ counterpart is Solo, a relatively unknown challenger top laner. Solo’s biggest strength on Cloud9 Tempest is his ability to play utility tops, such as Maokai or Shen, for his team. Solo is also capable of playing carry tops like Hecarim and Fizz, but his performances on those champions leave much to be desired.

Solo is a reliable top laner, but Cris has been on red-hot form this split and I expect to see Cris attempting to snowball on carry champions like Olaf or Fizz.

Coast hit the jackpot fishing Shrimp out of Korean solo queue. Arguably the team’s best performing member and the best jungler in the NACS, Shrimp is a huge playmaker for the team with the highest kill participation at 82.4%. Shrimp loves going aggressive, but do not confuse his play style with Rush’s Rambo approach. Unlike the Impulse jungler, Shrimp builds sightstone and effectively uses vision to create opportunities for his team. Additionally, the Korean rookie enjoys map control champions like Nunu, whom he cites as one of his favorite champions to play. In that sense, he is more like Move who creates opportunities and paves the way for his carries to finish off the enemy.

On the other side of the jungle is Hard, another promising North American talent, who is also the early game shotcaller for his team. While Hard’s stats illustrate him as an average player, the Cloud9 Tempest jungler has had a tough split due to his team’s struggles, and has not yet fully exhibited his capacity as a top challenger player yet. One redeeming quality, however, is the amount of vision he provides for his team (0.90 Wards Per Minute).

Both team’s performances will heavily depend on this jungle matchup. Hard has the potential to develop into an LCS jungler, but his counterpart is currently performing at a different level. Shrimp’s move-esque play style will be the source of Team Coast’s victories.

On a team with many bright points, Pekin Woof does not shine much. The Coast midlaner is a serviceable component, but has weaknesses could compromise the team in the playoffs. The biggest problem for Pekin Woof, is that he regularly falls behind in lane (-48 Gold Difference at 10 minutes), and against better midlaners like Yusui or Alex Ich, this could be heavily exploited. Additionally, he has not played a big part in his team’s damage (29.3%), which is not a good sign for a midlaner in a top challenger team. Fortunately for Coast, however, this meta is not too harsh on underperforming midlaners with the likes of Viktor, Kog’Maw, and Varus able to scale very well into the mid and late game.

On the other end of the midlane is the gifted challenger player Yusui. The 17-year-old star talent is mechanically the best midlaner in the challenger scene, who is also able to adapt to different play styles depending on his team’s needs. Yusui manages to repeatedly create himself an early gold lead in lane (+198 gold), but due to his team’s struggles, has been unable to effectively snowball into the mid and late game. Furthermore, Yusui does 36.1% of his team’s damage, but only 584 damage per minute (below average), which means the whole team has not been able to output enough damage. On top of that, the midlaner is only a part of 53.7% of his team’s kills. If Yusui hopes to beat Coast in the semi-final, he will need to lead his team to victory by involving himself in more fights and skirmishes and increasing his impact.

Yusui is undoubtedly the better midlaner in this matchup. If Cloud9 Tempest has any chance of winning, it will be on Yusui.

Alongside Cris, Mash is another player that endured an underwhelming LCS Spring Split, but, like his top laner, has managed to outshine his opponents in the summer NACS. Mash currently holds the highest KDA (16.60), the third highest kill participation (75.5%), the third highest damage per minute (502), and the second highest gold difference at 10 minutes (+172). Mash has done an excellent job executing laneswaps, playing a variety of different ADCs, and stepping up to become one of the primary carries on the team.

Mash will be facing off against LOD, a former midlane main. LOD is a talented player who has had a poor split statistically. The Cloud9 Tempest ADC deals below average damage per minute (383) and consistently puts himself in a gold deficit at 10 minutes (-223). LOD is currently one of the weak points in the team, and will have a lot to prove going into the playoffs.

Mash has been a very consistent performer for Team Coast, and his experience will see him win this matchup very handedly.

KonKwon is currently the best support in the challenger scene. Not only is he a ward machine with 1.37 wards placed per minute, but he is also a playmaker for the team on tanks like Alistar and Nautilus, which perfectly supplements Shrimp’s aggression.

On the other side of the matchup will be Sheep. The former Coast support has a ton of challenger experience and has bounced around plenty of teams in the last two years. Overall, Sheep is a dependable and consistent player who occasionally has his moments on Thresh, but is unlikely to have the biggest impact on the team.

KonKwon has proven his ability this split and is performing at a peak that we have not seen Sheep play at yet.

Just a quick glance at these stats tells you how dominant Team Coast has been this split. Whether that is due to the players clicking very well together, Saintvicious’ coaching, or a mix of the two, Coast have looked like a team ahead of the curve strategically. The team is able to create a massive gold advantage by the 15 minute mark (+1282 gold) through lane dominance and well-executed lane swaps. In addition, Coast has taken first blood in 91% of their games – a staggering statistic over 11 games and a testament to the team’s aggressive nature with Cris and Shrimp. The only weakness Coast has shown is in their lack of midlane pressure early on, but the strength of the rest of the team and the forgiving midlane meta makes it difficult for opponent to expose.

On the other hand, Cloud9 Tempest’s column reflects the team’s split. The lack of on-hand coaching  resulted in poor drafts and a lack of understanding of the laneswap meta, being one of the slowest teams to kill their first turret (13.6 minutes) and taking down the first turret of the game only 50% of the time. Fortunately, however, the team possessed enough talent to rack up some wins through sheer outplay. When the players were finally moved into the organization’s gaming house, the team showed slight improvement in the last week of the split, where they were able to pull off a win versus their semi-final opponents, Coast. This offers some hope for the underdogs going into tonight’s semi-final.

Cloud9 Tempest have finally managed to get the infrastructure and support required to guide their talented roster. With another two weeks of bootcamp, we might witness a renewed and reinvigorated squad. They have already managed to take a game off of Coast in the regular split, so winning a game in a best of 3 is not outside the realm of possibility. However, Team Coast has shown not only consistency, but also mechanical and tactical dominance. I expect to see a better Cloud9 Tempest, but, once again, I will have to side with the team that has the experience, leadership, as well as the proven results, over the team that has shown potential.