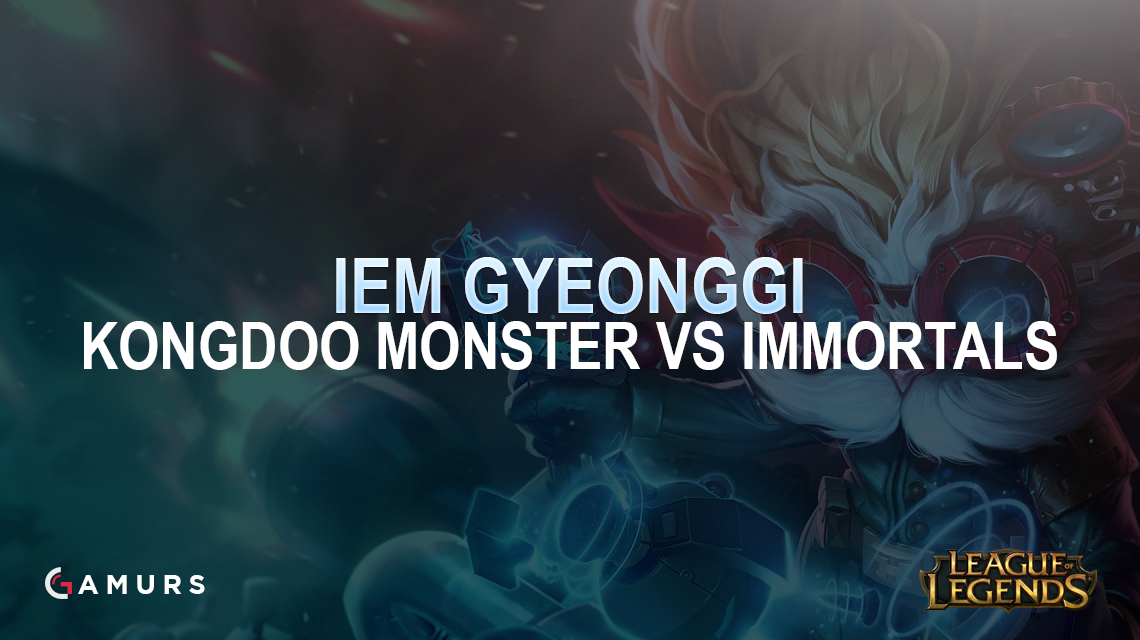 In the second semifinal series of IEM Gyeonggi, the revamped Immortals of the North American League Championship Series took on Kongdoo Monster of Korea’s LCK. Samsung Galaxy, after defeating Team Liquid 2-0 in the first semifinal, awaited the winner of this match in the tournament finals.

In the first game of yesterday’s series between Liquid and Samsung, Liquid had a relatively strong start, but faltered in the later stages of the game to Samsung’s crisp macro play. In game one between Immortals and Kongdoo, the story was very similar. Despite solid early leads for top laner Lee “Flame” Ho-jong and jungler Joshua “Dardoch” Hartnett, Immortals failed in the latter stages of the game with poor positioning and decision making. One mistake in macro play from Immortals was enough for Kongdoo to take control of the game, and the Korean squad never looked back. With methodical, merciless macro play, Kongdoo took game one in 34 minutes.

In the draft for game two, Immortals adapted. The composition was built to snowball an early game lead, should Immortals win the early game once again. On top of that, rookie AD carry Cody “Cody Sun” Sun was given Ezreal, a champion with range and mobility in order to help the young player get out of his poor run of form. If all went well for the North Americans, no late game shotcalling from Kongdoo would matter and the rookie would gain some confidence in his play. It wasn’t perfect, as the game still lasted just over 31 minutes, but Immortals came out on top with a late ace that allowed an uncontested push to the Kongdoo nexus.Cody Sun, after looking shaky all tournament up to this point, put on a show as he had a perfect 8/0/5 performance on the Ezreal.

Kongdoo took Ezreal away from Cody Sun for the final game of the series, and the strategy seemed to work. Cody Sun returned to his previously poor form, constantly mispositioning and performing poorly in lane. As a team, Immortals had some bad moments, specifically a terrible fight 12 minutes in. Seemingly every member of the team was out of position, giving Kongdoo an easy win in the skirmish. While the rookie understandably struggled on the international stage against talented opposition, Dardoch and Flame continued to keep Immortals alive, but it wasn’t enough. Immortals obviously lost track of what was happening, got tilted, and couldn’t get back in the game. Every move Immortals made, Kongdoo had an answer to. The Korean squad dominated Immortals across the map, and took the series victory.

Samsung Galaxy and Kongdoo Monster, both of Korea’s representatives at IEM Gyeonggi, will be facing off tomorrow in a best-of-five series to determine the tournament champions.

Who do you think will win IEM Gyeonggi? Will it be Samsung or Kongdoo?

Let us know your thoughts in the comments below or tweet us @GAMURScom.