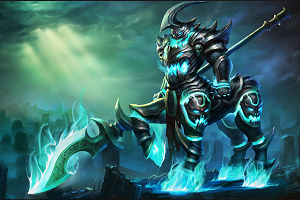 Welcome to Meet your Meta, where I analyse some of the more unconventional professional picks from around the world and tell you how you can use it in your everyday LoL games, and potentially even ranked!

This week we’ll be looking at what is now a fairly typical Oceanic scene champ in the Shadow of War, Hecarim. First brought out from competitive obscurity in the NA Challenger scene by Keane, an Oceanic import for the then Curse Academy, his Mid Hecarim became a force to behold and it still draws bans towards the Chipotlehunter in solo queue today. As the spring split goes on it wouldn’t be surprising for Keane to pull the horse out of the bag at least one more time and even less of a surprise to see it banned against his team, Gravity.

The pony was brought to show in the Oceanic Pro League by Legacy E-Sports top laner Cardrid where he went toe to toe with the Undead Juggernaut of Sion. Whilst the Hecarim was able to begin snowballing early he couldn’t take that advantage and create a meaningful gap for his team, who looked out of sorts at times, and remained the only bright spot in an otherwise dull game for Legacy, who were well beaten.

Hecarim has always remained a solid solo queue pick but remains in relatively low popularity, hovering around the 4-5% ranked pick rate and similarly skirting around the  50% win rate. Despite Mid Hecarim gaining a small amount of traction following Keane’s explosive debut, most games see the Warpath heading towards the jungle, with smite taken in over 80% of games. And it’s not without any reason- Hecarim’s ganking potential post 6 is immense with his ultimate, Onslaught of Shadows, giving him almost unrivaled mobility and forcing enemy laners to be aware of more unconventional gank paths. His pre-6 ganks are also very strong with his Devastating Charge catching any unaware targets by surprise with his sudden burst of speed. Following the recent 5.1 patch, Hecarim got the cap on his Spirit of Dread healing against both minions and monsters by a flat 30 health on all levels massively increasing his potential for sustain in the jungle.

With the current meta of the top lane beginning to shift away from the necessary tank and becoming more diverse with the beginning of season 5 it is not surprising that options such as Hecarim are being looked at. Whilst tank champions such Maokai and Dr Mundo have begun to fall out of favour for strong team-fighters champions such as Lissandra and Rumble,  they remain nonetheless quality choices for any team. What Hecarim brings to a team is unrivaled initiation potential at any time with his ultimate whilst remaining tanky and an ability to cause havoc within the middle of a team fight with his Q (Rampage) and W (Spirit of Dread) abilities both dealing AOE damage around him. Hecarim also brings massive pick potential with the knock-back on his E (Devastating Charge) immobilising enemy champions and giving the rest of his team time to pick them off as well as immense chasing potential.

Top Hecarim, like Mid Hecarim before him, has a massive upside that hasn’t yet been fully explored. Although his laning is far from ideal, being hampered by being a melee champion with no ranged abilities at all, the recent buff to his W’s healing gives him amazing sustain within the lane, making it harder to force him out. Without any form of hard CC it becomes incredibly difficult to gank the Shadow of War as his passive allows him to ignore unit collision, giving him an optimal move path for him to use his E to trot away at any moment.

Whilst not being hampered by jungle items it is possible to build items such as a Trinity Force, a huge power spike for Hecarim, or an Iceborn Gauntlet, giving him huge tank and cool-down bonuses, extremely quickly, allowing him to progress further into his build in a far quicker time than his jungle counterpart. As a champion with strong base defensive stats and no real benefit from raw attack damage, an ideal build comes from items with Spellblade damage (Trinity Force and Iceborn Gauntlet) along with some tank stats and some armour penetration. However, he can also be built as a full tank, giving up some damage for even more survivability within the middle of team fights.

A tanky Hecarim really begins to shine in the mid game before any armour or magic penetration items have been completed, reducing any potential damage on him and forcing enemies to use more to remove him from play or just return empty handed. Items such as Banshee’s Veil and Randuin’s Omen both help to give Hecarim amazing survivability throughout the mid to late game.

Boots are a must on Hecarim, and his passive gives way to some very interesting options. Boots of Mobility, whilst appearing the best choice, don’t provide any combat stats at all outside of an initiation and should only be selected when roaming constantly. Otherwise, a selection of boots should depend on how you want to play- Ninja Tabi and Merc Treads are great for building tankier, and Boots of Lucidity and Berserker Greaves are exceptional for dealing more damage. Boots of Swiftness are surprisingly viable on Hecarim as his passive turns the constant move speed bonus into more AD, allowing Hecarim to roam and make plays.

One thing that puts Hecarim apart from other potential top laners is his ability to roam and impact other lanes. By using the move speed steroid on his E he can appear in mid lane within seconds of leaving top, and with the Homeguard enchantment on tier 2 boots he can arrive in mid or bot lane almost immediately after recalling, saving the use of Teleport to return to his top lane or to continue roaming.

Hecarim’s ability to stick to carries is immense with the movement speed from his E allowing him to catch all but the most mobile of enemy champions, allowing him to lock them down for his team to finish off where otherwise they would have escaped. An Elixir of Iron helps Hecarim’s ability to stick to enemies and initiate immensely, granting him bonus size, attack range, tenacity and a path which boosts allies movement speed by 15%.

As a top laner, Hecarim should take Teleport over Ignite as his kill potential pre-6 isn’t good enough to warrant taking it. Hecarim’s final summoner spell becomes a matter of preference after that- Flash can be used for unrivaled utility, Ghost allows amazing roams and even more AD from his passive, and even Heal can be used for the slight movement buff and more sustain. However, Flash or Ghost are probably the two most useful options for the final summoner.

Hecarim is not without his weaknesses, however. He can struggle in lane against an opponent with ranged harass or auto attacks and can be zoned. He can also be extremely mana hungry in the beginning before he can complete a Sheen or a Glacial Shroud depending on his build path. If he can’t begin to snowball in the early game his usefulness can quickly deteriorate as he becomes nothing but a suicide initiator or a tank line, and his damage output falls off immensely after he lands in a team fight.

Because of his primary position as a jungler, picking Hecarim for top lane can throw off some opponents who have never dealt with him in lane before. Despite his relatively weak laning phase, a good Hecarim player can single-handedly turn the tides of a team fight and the game with some good initiations and follow up. With a wide variety of potential build paths depending on how you intend to use him, he presents amazing versatility and a solid addition to any team.

Armyx is a League of Legends fan with an eye for the unexpected in competitive play. He follows both the NA and EU LCS and keeps a close eye on the LPL, LCK and OPL across the world. He plays both meta and slightly off meta champions on a rotating basis.