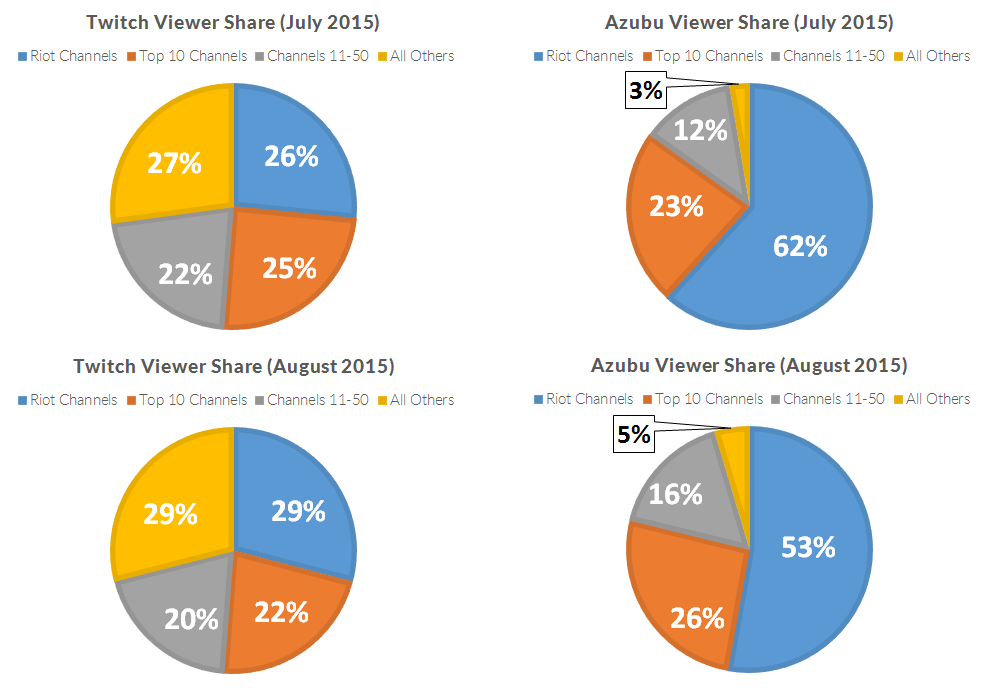 Without a doubt, the hype for regional playoffs helped drive interest in Riot content, but surprisingly, all broadcast groups (first-party content, top broadcasters, and everyone else) saw an increase in time watched. Perhaps seasonal changes like the end of summer and return to school for many students also spurred a boost the game’s overall numbers.

In either case, Azubu continues to follow far behind. Its viewership increased 10.0% in July to 2.9 million viewers hours but dropped 10.4% to 2.6 million in August, its second decrease in three months. In August, fans watched as much LoL on Twitch in 20 hours as they did on Azubu for the whole month.

On the positive side, the company’s content diversity seems to be improving though. July’s decrease was entirely caused by 416,000 fewer hours spent watching first-party content from Riot Games. All other content increased by 115,000 viewer hours in the month, or 10.4% over July.

Its broadcaster count has risen for three consecutive months and has grown 484% from 136 in May to 794 in August. While more broadcasters have transitioned to  the platform, viewership has not moved over to the same degree even after the release of Azubu 3.0.

In July, WildTurtle became the first person to unseat Bjergsen from the top of this chart. While they maintained similar viewer counts, WildTurtle only needed to maintain those numbers for 9.6 hours while Bjergsen acquired his average across 23.6 hours. But a win’s a win, so score a title for Turtle. In August, he did not stream at all, so he vacated his crown and Bjergsen reclaimed his spot.

Nightblue fell from second with Turtle’s rise, but returned in August. He has added seven thousand viewers since bottoming out in April. And unlike the Turtle/Bjergsen situation, this is despite streaming 200 hours each month. It appear as if he took some viewership from Imaqtpie (who streams in the same time slot and fell to sixth in July before bouncing back to third in August.

ToyZ has staked his spot on the chart, reaching it in consecutive months. Sp4zie continues to cling onto a bottom spot of the chart even as he has increased time spent streaming.

Bjergsen remained on top, making it eight out of the last nine months for peak viewers. Nightblue remained right behind him in July but fell to fifth in August as sodapoppin, Toyz, and Imaqtpie made even stronger showings.

Phreak arrived on the list for the first time, becoming the first Riot employee to make an appearance on the charts. Sorry, Riv, you’ll probably need to play more ranked fives.

And for the first time, a Turkish broadcaster has made the list as wtcNN hit over 30,000 viewers in August.

misschieviouss finished on top in July, becoming the rare person to break the 500 hour barrier. However, she fell off the list and chart regular weitoodamage regained the number one spot he held in June.

Other repeat broadcasters include Yawaraka03, Drkreaperr, and ipav999, who have all remained on the chart for at least three consecutive months.

Also of note is Trick2g‘s reappearance in July, reaching nearly 400 hours streamed before getting swatted off the charts in August.

Nightblue overtook Imaqtpie in July, knocking him off the top spot for the first time ever. Amazingly, he continued his reign in August even as Qtpie rose back to number two.

Trick2g used his endurance to reach second and fourth respectively. While not at the top of average viewer counts in either month, his volume of broadcast time allowed him to stay near the top of this one. Voyboy maintained third for the third consecutive month.

Froggen has used his off-season time to stream more and consequently made the list each of the last two months. And StonedYooda, a Brazilian pro, made his first appearance on the chart in July and remained in August.

If you’d like to find out where someone landed on these charts, you can view full rankings by downloading the full files from Google Docs: